How I Broke ‘Cycle of Assimilation’ Away From Jewish Engagement 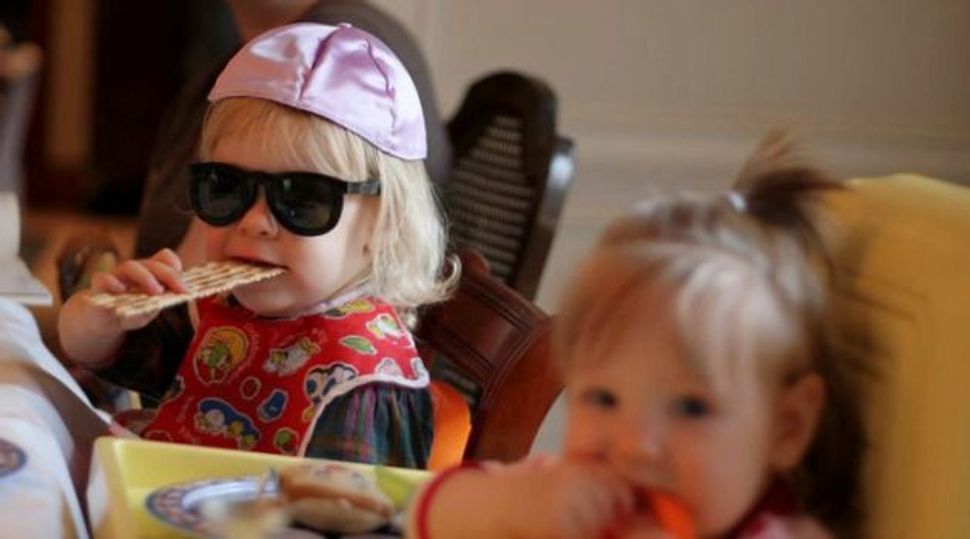 Passover Daughters: Carla Naumburg was brought up by secular parents. Yet she is raising her daughters in a more Jewishly engaged way. Image by courtesy of carla naumburg

According to the results of the most recent Pew survey of Jewish America, I represent the best hope for the future of the Jewish people.

I guess I’d better explain that one.

The Pew survey found a significant rise in those who are not religious, marry outside the faith and are not raising their children Jewish, trends that are resulting in rapid assimilation affecting every branch of the faith except the Orthodox.

The problem with assimilation is that it is transmitted generationally, or, as the Pew report puts it, “circular and reinforcing” in that Jews of no religion (as defined by Pew) are significantly more likely than religious Jews to marry non-Jews. Those interfaith partnerships are significantly less likely to raise their children Jewish or even partially Jewish than households in which both parents identify as religiously Jewish.

I broke that cycle.

I was raised in a secular, interfaith family. My father was born to two Jewish parents, my mother has Jewish heritage, but neither of them identify as Jewish. If the Pew researchers had called me up when I was in high school or even college, I would have fallen into the “non-Jewish people of Jewish background” category.

If they had called me last month, I would have fallen into the “Jew by religion” category.

In the two decades in between, I married a Jewish man in a Jewish ceremony, joined a Reconstructionist synagogue, had a “conversion” ceremony, completed multiple adult education courses, traveled to Israel, joined a JCC, stopped eating treif, gave birth to two daughters (and held their brit bat ceremonies in our synagogue), became a contributing editor writing for Kveller.com (a Jewish parenting website), enrolled my daughters in Hebrew school, and just this fall, started touring Jewish day schools.

I’ve worked hard to find a path into the Jewish community that shares and encourages my commitment to a Jewish life and progressive, egalitarian values. It has been far from easy. I had to choose between outdated interpretations of halakha and my values, and as a result, there are members of the American and Israeli Jewish communities who would not consider me Jewish because the beit din at my mikveh consisted of three female Rabbis. If I didn’t have the support of like-minded individuals, including my husband, Rabbi, and synagogue community, I probably would have walked away a long time ago. Just like so many other American Jews are doing every day, and they’re taking their children, and perhaps the future of the American Jewish community, with them.

It shouldn’t be that hard, especially given than more than 94% of Pew respondents share the pride I feel in being Jewish.

Help us find the 94%. Tell us the stories of today’s proud American Jews. Tell us who they are, describe what they do that’s important to all of us and we may feature them in an upcoming issue of the Forward.

Let us know your name, your email, and the name and story of the person you are submitting in the form below.

Questions of intermarriage and assimilation are complex, and no one intervention or outreach program is going to solve them, or even make a significant dent. Nonetheless, we need to make it possible for a diverse group of “Jews of no religion” to engage Jewishly because of their values, not despite them. This will require a few fundamental changes.

The Jewish community needs to fully embrace interfaith families. According to Pew, “Among Jewish respondents who have gotten married since 2000, nearly six-in-ten have a non-Jewish spouse.” Regardless of how you may feel about intermarriage, the undisputable reality is that if we want to bring Jews back into the fold, we need to include their non-Jewish family in meaningful ways. I’ve heard the complaints about watering down the Jewish people in this way, and I find them offensive and irrelevant. I’m not asking for Christmas trees in shul, but I am suggesting that communities work to acknowledge, welcome, and include non-Jewish spouses in meaningful and respectful ways.

We need to fully embrace the children of all interfaith families. Yes, I am talking about patrilineal descent. The Pew Poll didn’t break out their results by the gender of parents in interfaith families, but one might reasonably estimate that our community is telling at least half of all children of interfaith marriages (those with Jewish fathers and non-Jewish mothers) that they just aren’t Jewish. Currently, the best we can offer those individuals is a conversion ceremony that won’t necessarily be recognized by Jews who are more conservative religiously than they are, or by the State of Israel. Our community needs to confer Jewish status on all children born to one Jewish parent, regardless of whether or not they were raised in Jewish homes. Until we do that, we need to come to an agreement on the conversion process.

We need to fully recognize the authority of female Rabbis. There is just no way to resolve the issue of who is a Jew (including patrilineal Jews and converts) until we can agree on who can perform conversions. Until then, our community will continue to be divided (and weakened) by unnecessary disagreements that are fundamentally about power, politics, and gender discrimination.

Our community needs to be fully inclusive and welcoming of lesbian, gay, and transgendered Jews. This includes full access to all of our educational institutions and all positions of leadership. Besides the fact there is quite simply no justification for discrimination based on sexual orientation and identity, our community will never be able to grow and prosper as long as we embrace (either actively or passively) oppressive policies.

(Even if you don’t agree with (or just don’t care about) the role of women and the LGBT community, even if you only care about slowing or reversing the current rate of assimilation among American Jews, consider these two statements from the Pew poll: “Jews are strong supporters of gay rights,” and “Jews are among the most strongly liberal, Democratic groups in U.S. politics.” It’s hard to imagine that the Jewish community is going to attract unaffiliated or non-religious Jews until we take a clear, vocal, and unequivocal stance on these issues.)

These changes aren’t going to be easy, but the reality is that they are already happening in synagogues, JCC’s, and non-profit Jewish organizations in every single denomination all across our country. If we want to keep our community strong, we need to continue to find ways to make the teachings, rituals, holidays, and values of the Jewish community meaningful, relevant, and accessible to the next generation of Jews. If we—the engaged membership and leadership of today’s Jewish community, the ones who stayed and the ones who came back—can’t come together on these crucial issues, then we are the ones responsible for the changing demographic of the Jewish community, not the ones who are walking away.

Carla Naumburg is a writer, clinical social worker, and mother. She is a contributing editor for Kveller.com, and she is currently writing a book on mindful parenting, to be published by Parallax Press in the fall of 2014.

How I Broke ‘Cycle of Assimilation’ Away From Jewish Engagement