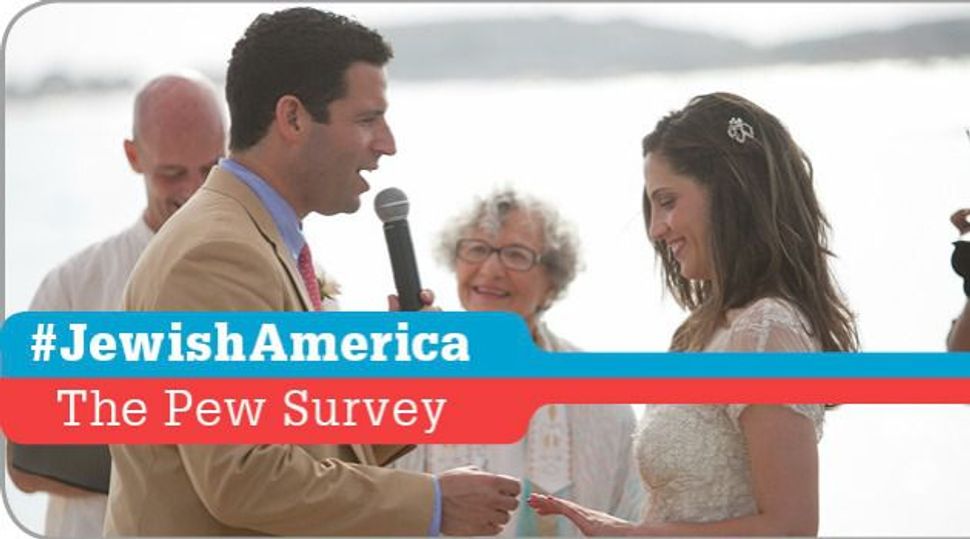 Reaction to the Pew Research Center’s survey on American Jews is following its own version of the cycles of grief: first horror, then denial, then a shrugging acceptance. After the gloomy news reports of this first-ever independent survey, a second wave of commentators have focused on what they call the “good news”: the population numbers have gone up instead of down; overall intermarriage rates are steady; religious identity is increasingly fluid everywhere, and best of all, 94% of American Jews express some pride in being Jewish.

A close and careful reading of the results of Pew’s massive undertaking make it difficult to share this enthusiasm. Many commentators have fallen into the trap of comparing Pew’s numbers with the results of surveys past, conducted by organizations with their own Jewish agendas and, in the case of the last decennial poll, in a manner seriously flawed. Instead, consider what Pew tells us about Jews now and in the future.

Yes, the total number of Jews has risen in the United States, to about 5.3 million adults and another 1.3 million children — with “Jewish” interpreted quite broadly. But because the Jewish population hasn’t increased nearly as rapidly as America’s population as a whole, our share of it has shrunk.

In answer to a 1957 U.S. Census Bureau question, 3.4% of Americans 14 years or older said they were Jewish when asked about their religion. The Pew survey put the comparable number today at 1.8%. Include secular and cultural Jews — “Jews of No Religion,” in Pew parlance — and the percentage climbs up to 2.2%

Worse, Jews are older than the general population and have a lower fertility rate. Non-Orthodox Jews, in fact, aren’t having nearly enough children to replace themselves.

Think about what this startling drop could mean to the political, economic, social and cultural clout of American Jews if it continues. Already we are seeing a decline in the number of Jews in Congress. How will everything from support for Israel to campaigns for social justice be maintained if we become more of a minority than we are today?

Yes, intermarriage rates appear to have held more or less steady since 1990 — when today’s numbers are compared with the more problematic surveys of the past. But forget the demographic debate, and examine the trend lines within the Pew survey. Among Jews who got married before 1970, just 17% have a non-Jewish spouse. Among Jews who have gotten married since 2000, 58% have a non-Jewish spouse — and that proportion climbs to 72% if you count only non-Orthodox Jews. (The Orthodox intermarriage rate is negligible.)

The survey shows, conclusively, that intermarried families are less connected to Jewish life in myriad ways, have fewer children and are less likely to raise those children as Jews. It may offend liberal sensibilities to say that this is a problem, but this is a problem. It’s a problem for anyone who believes in a distinctive American Judaism that is egalitarian, tolerant and engages with the modern world.

Clearly the pride that an overwhelming number of Jews express in their identity is linked to the welcome acceptance of Jews in broader American society. But that acceptance comes at a cost.

The Pew survey shows a remarkable dilution of Jewish identity, where “having a good sense of humor” is more than twice as essential to those surveyed as “observing Jewish law.” Among Jews of no religion — a growing cohort — only 10% said that “being part of a Jewish community” was essential to them.

Where is the good news in these numbers? Jewish identity is being reimagined, and in some select, creative hubs, that is happening in extraordinary and exciting ways. But elsewhere, this identity is being diluted beyond recognition and sustainability.

No, American Jews aren’t vanishing. But vibrant non-Orthodox Judaism is threatened by trends both universal and particular, and it will require honest evaluation, a bold commitment to education and a passion to care for each other in order to reverse those trends. If such a Judaism cannot thrive in 21st Century America — where we are as free as we’ve ever been in the Diaspora — what does that say about us? And what does that say about Judaism?