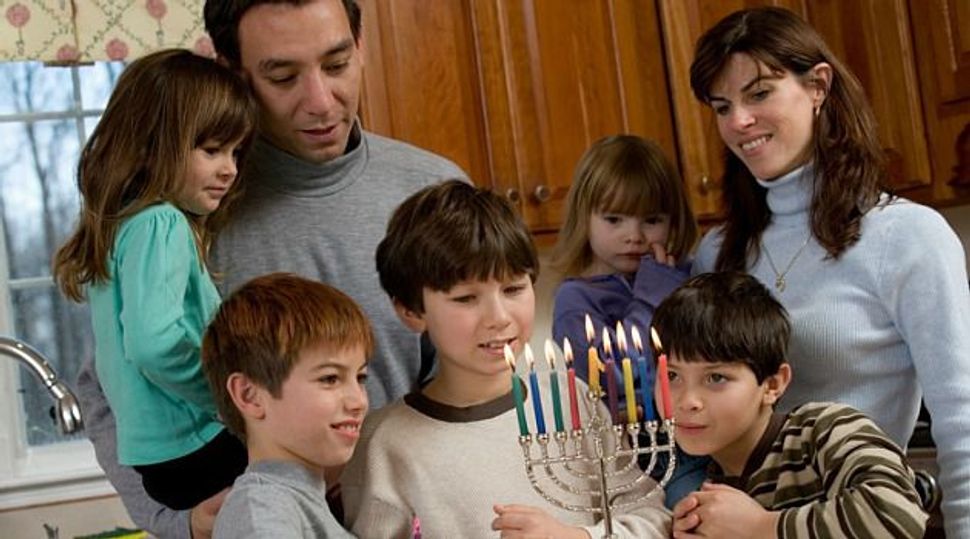 Vanishing: Is this family really an endangered species? Image by Thinkstock

Some years back I wrote about my Uncle Morty, who left Long Island for Manhattan one day in 1959 and never returned. They found his Chevy alongside Grand Central Parkway, but no Morty. The loss was devastating.

I was recalling the incident, I wrote, not for sympathy but to note that Uncle Morty was the only Jew I’d ever known who actually vanished.

At the time, Jews everywhere were abuzz over the 1990 National Jewish Population Survey, which famously reported that America’s 5.5 million Jews were intermarrying at a rate of 52% per year. Given that only 28% of intermarried couples reported raising their children as Jews, you didn’t need higher math to see that American Jewry was headed for oblivion.

Mass hysteria ensued. Many readers thought half the Jews had already married non-Jews and left Judaism. An official of the World Jewish Congress testified in the Knesset that 52% of American Jews were assimilating each year, whatever that means.

Several social scientist friends told me the intermarriage number sounded fishy. Over the next few years I wrote a number of articles questioning it. Soon the survey’s sponsor, the Council of Jewish Federations, got very angry with me. It reached the point where I’d attend CJF’s annual General Assembly and find staffers comically fleeing when I approached, afraid to be seen with me.

In the spring of 1991, worse news: The City University of New York released a study of American religions showing just 4.3 million Jews. It turned out to be the previous year’s survey recycled. CJF’s researchers had made 125,000 phone calls, looking for Jews to interview. CUNY took the notes from those calls and published a breakdown of Americans’ religious identities. In all, 4.3 million Americans claimed their religion was Jewish. No mention of 1.2 million others who identified as Jews by “culture” or “ethnicity.”

Soon enough, 4.3 million began appearing in speeches, articles and books bemoaning Jewish disappearance. Nobody clarified that this wasn’t actually the number of Jews in America. When I called the researchers to ask why not, they said it wasn’t their problem.

By now it was taking a toll on my home life. I became a bore at parties. I was haranguing innocent bystanders about Jewish demography. I was scaring the neighbors. I promised I’d never do this again.

But in 2000 the CJF, now renamed United Jewish Communities, conducted a follow-up survey, more expensive than ever, hoping to quell doubts. Among other things, NJPS 2000 corrected the 1990 intermarriage figure of 52%. It seems the authors of the 1990 report had included people who had a Jewish parent but did not consider themselves Jewish. If you counted only interfaith marriages in which one of the partners was Jewish, the figure was 43%. I was right.

Unfortunately, the new survey was riddled with worse mistakes. The summary report was held back for two years and put through two expert reviews, first by in-house volunteers, then by an outside team headed by the president of the prestigious American Association for Public Opinion Research. His report on the survey’s main flaws went on for pages.

The new survey’s estimate of total Jewish population was 5.2 million. This sounded lower than 1990. The authors cautioned that the new survey had used different counting methods, so its results shouldn’t be compared with 1990. In fact, they cautioned, 5.2 million was likely to be an undercount. The real figure was probably closer to 5.8 million.

It was such a mess that the UJC published the results with extensive cautionary notes, then quietly folded its survey department, got out of the counting business and changed its name again, this time to the Jewish Federations of North America. I couldn’t help it. I wrote about it.

None of this stopped the Oy Vey Brigades from trumpeting a new crisis: Three hundred thousand Jews vanished! See what 52% intermarriage does?

One team, at the San Francisco-based Institute for Jewish and Community Research, conducted a classic random-digit-dialing survey, like NJPS but with one big difference: Rather than ask the respondent’s religion off the bat, they opened by discussing family, then brought up religion after building some trust. Result: More Jews acknowledged being Jewish. Published in 2002, the survey found about 6 million Jews.

A second team, at Brandeis University, conducted a so-called meta-analysis, melding and cross-analyzing dozens of existing surveys containing evidence on Jewish population. Its total, 6.4 million, was published in 2006.

A third count, published annually in the American Jewish Year Book, tallied local estimates from hundreds of communities nationwide. Its total rose every year: 6 million in 2000, 6.4 million in 2006.

Finally, this year, the Pew Research Center stepped in to resume the full-scale surveying that the federations had given up. The result is impressive. It followed the opening-chat technique pioneered in San Francisco and found the same growing population others found. Plus lots of other encouraging data. It was, at last, a survey with good news. But, as you’ve probably heard by now, Pew also reported a sharp rise in Jews rejecting religion. That brought the Oy Vey Brigades back out to bemoan impending doom. Well, last week I questioned the no-religion statistic. Now I’ve got Pew and the Oy Veyniks mad at me.

What makes people so upset when they hear we’re not dying? Three things, I think. One is an understandable defensiveness by scholars seeing their work impugned. A second backlash comes from those, mostly Israelis and Orthodox leaders, who feel threatened by the notion that Jewish integration in the open society might have a happy ending.

And some folks just can’t abide good news. For them, anything that says Jews aren’t dying must be a lie.

Maybe. But here’s the thing: We don’t know what’s ahead. In 1964, when Jews numbered 5.2 million, Look magazine published a cover story, “The Vanishing American Jew.” Fifty years later, Look has vanished and the Jews are still here.

Maybe it’s time to listen to the wise Ecclesiastes: “Sow your seed in the morning, and withhold not your hand in the evening, for you know not which will thrive — whether this or that, or whether both will be good. But the light is sweet, and it is good for the eyes to see the sun.”