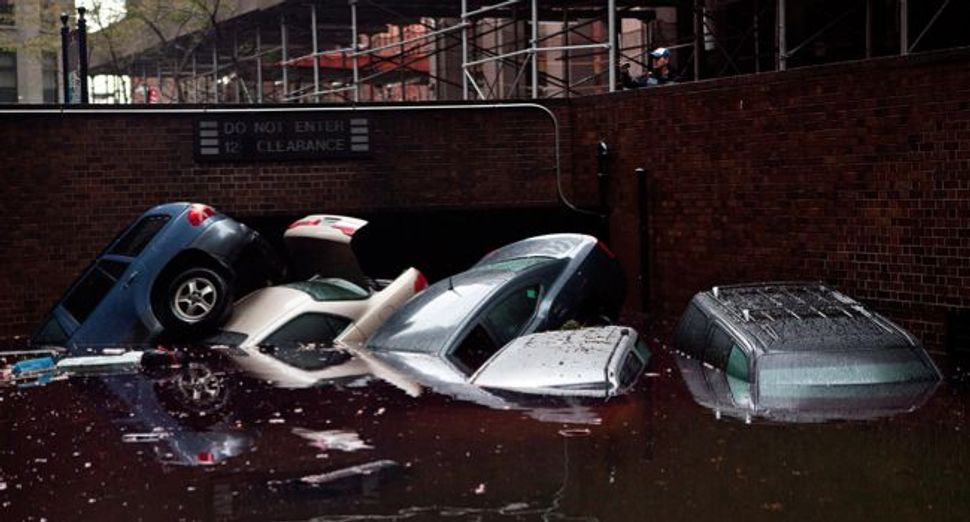 Submerged: Where are we, a year after the super storm? Image by Getty Images

It’s been a year since the ferocious winds and voluminous rain of Hurricane Sandy left parts of the East Coast crippled and gasping for breath. The dead have been buried, the flood waters have receeded, most public services have been restored and the nation’s attention has drifted away. But look closely: The signs of destruction are still there.

Homes left in shambles. Storefronts still empty. Towering office buildings whose flooded basements have yet to be restored. Debris stubbornly clogging the shoreline. The Statue of Liberty reopened on July 4, but Ellis Island is closed indefinitely. One hospital, Long Beach Medical Center, remains shuttered. And the congregants of West End Temple in the Rockaways are still worshipping in a trailer.

At least 72 synagogues in the New York metropolitan area were damaged by the storm, some incurring millions of dollars in losses. Jewish communities were affected in other ways, too: houses destroyed, businesses erased, day schools and senior citizens centers damaged.

So drawn out are the consequences of this storm that UJA- Federation of New York is mobilizing mental health and spiritual care teams to assist those struggling with longer-term trauma issues. Later this year, the federation will launch a trauma education initiative to train service providers in agencies, day schools and synagogues.

So the first lesson here is that a storm of this magnitude does not fade away quietly. The suffering continues.

The second lesson is that even though Jewish charities have poured million of dollars into relief efforts, the need continues. The federal government is not the only answer here — even if it were functioning. And as of this writing, it is not.

Some communal leaders made a great show of urging synagogues to apply for funds from the Federal Emergency Management Agency, even though its regulations do not allow houses of worship to receive such relief. Pressed by lobbyists, including the Orthodox Union, the House passed a bill to reverse that regulation — a version so broad that public money could have been used to purchase Bibles, Korans and Torahs.

The Senate’s iteration more narrowly focused the federal aid to repairs of physical structures, but that change wasn’t enough to persuade Delaware’s Tom Carper to bring the bill up for discussion in the Homeland Security and Government Affairs committee that he chairs. And that’s because Carper — rightly, in our opinion — believes that the bill is unconstitutional.

The third lesson from Sandy: Instead of lobbying FEMA for money, let’s lobby Congress to address the looming environmental concerns that may bring another devastating storm even before we have fully recovered from this one.