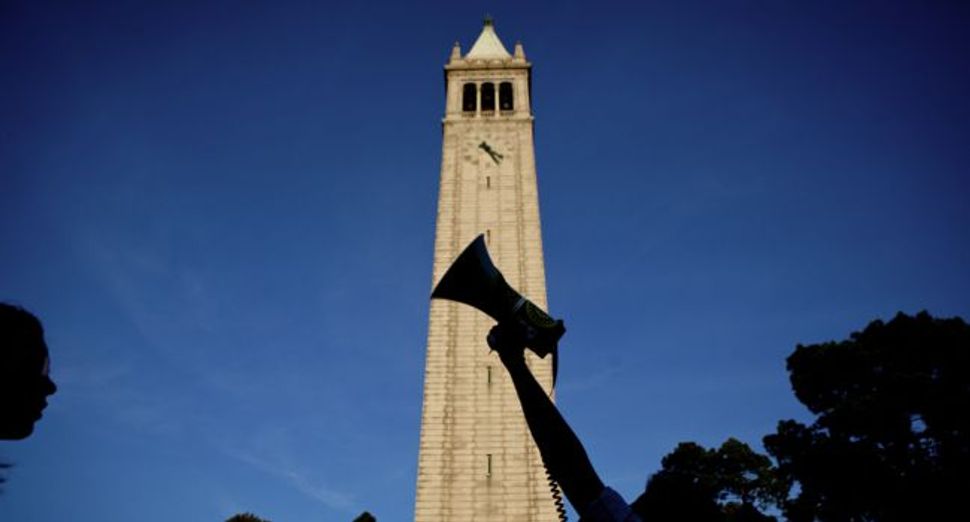 Not Going Quietly: J Street U?s Berkeley group wants to be part of the conversation. Image by Getty Images

The recent decision by the Jewish Student Union at the University of California, Berkeley to reject an application for membership from J Street U points to a deep problem in the American Jewish community.

As leaders of J Street U at Berkeley who love Israel but worry about its future, we found this decision strange and disturbing. The clear message was that merely because we are concerned enough and intellectually curious enough to question some of Israel’s policies and practices, our group has no place under the pro-Israel tent. It forced us to question the limits our community has set on acceptable pro-Israel discourse.

We are both the product of years of Jewish education from Jewish Day School to summer camps where we were taught that Jewish values are inexplicably linked to concepts of human equality and social justice — indeed that concern for justice was one of the gifts Judaism has given the world.

During many trips to Israel, we have explored every corner of the country. Unlike some of our peers who stick to the regular tourist spots, we have also visited the West Bank and East Jerusalem, where we were challenged by our Israeli and Palestinian peers to examine the meaning and the daily reality of the occupation. We believe that speaking honestly about these experiences makes a serious contribution to the conversation around Israel at UC Berkeley.

Our experiences inspired us to become leaders in J Street U, the campus arm of J Street which promotes a two-state solution to the Israeli-Palestinian conflict, a goal which is the official policy of the Israeli government and supported by a majority of both Israelis and Palestinians as well as American Jews.

The JSU, a Hillel supported umbrella organization, is supposed to unify all Jewish students. How then can it reject a vibrant, growing, enthusiastic movement like J Street U? Are our views so threatening, so radical? No, they are shared by the vast majority of American Jews and by a wide consensus of opinion in Israel itself. JSU’s rejection of J Street U’s membership is designed to drive students away — and is already doing so.

At a time when attachment to Israel among younger members of our community is weakening, as demonstrated by the recent Pew Research Center poll of American Jews, one would think that J Street U would be welcomed into the pro-Israel fold at Berkeley. Do they have so many friends, so many supporters that they can afford to turn us away?

Since the founding of our chapter, we have hosted many events aimed at educating Jewish students about the Israeli-Palestinian conflict and encouraging them to advocate for peace. Some of these students were first introduced to Berkeley Hillel, the center for Jewish life on campus, by attending a J Street U meeting.

Unfortunately, the leaders of the JSU are merely copying many of their elders, the so-called leaders of our community, so many of whom insist on a similar standard of ideological purity and discourage honest discussion about Israel. As Jews, we are raised and educated to question and discuss, but then are told that Israel is off-limits.

Who loses from this? Everyone. Israel loses the dedicated and critical supporters it so desperately needs. The Jewish community loses a generation of future leaders, alienated by the code of silence imposed on them. The JSU loses, too. Its withdrawal into its own narrow shell leaves campus discussions on Israel to be dominated by extremists.

Berkeley Hillel understands what’s at stake and we will work with our Hillel leaders to transform the JSU into a place of pluralism and we will continue to engage with Jewish students. We will host coffee talks, movie screenings, and challenging discussions. We will continue to advocate for a two-state solution to the Israeli-Palestinian conflict. We will demonstrate that Berkeley’s Jewish community is strong enough to welcome a diverse range of voices. Eventually, even JSU will get the message.