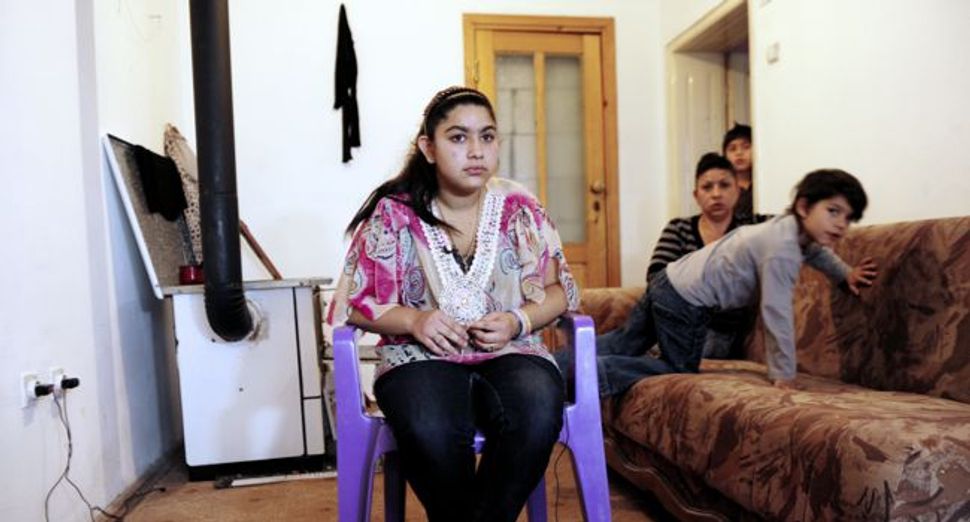 Expelled: Leonarda Dibrani, the girl at the center of the storm. Image by Getty Image

It’s déjà vu all over again for the French, with memories of the past washing up against experiences in the present. Tragically, an innocent teenage girl named Leonarda Dibrani has served as the spark for the most recent episode of this recurring national trauma.

Two weeks ago, the French police stopped a bus taking Leonarda and her classmates on a school field trip. As the students watched in disbelief, the police arrested the girl and took her away. Along with the rest of her family, Leonarda was then shipped back to the family’s native Kosovo. (In one of the story’s many twists, it turned out that Leonarda’s father had lied about the family’s origins: an association with war-torn Kosovo, he thought, would help his family settle in France.)

The reason for the arrest was, at first glance, simple: the family, who are ethnic Roma, had been living in France as undocumented and illegal aliens for five years. Acting on a law that had already led to the expulsion of hundreds of Roma, the gendarmes were obeying the legal orders of the government.

Yet, in the brackish confluence of past and present, no action is ever simple. The French filtered their current economic malaise and political incoherence through images of les années noires — the four years of the Nazi occupation of France — and, quite suddenly, the all too often bumbling government of President François Hollande stumbled into yet another crisis.

Since the Socialists came to power a year and a half ago, they have frequently given the impression that they instead came to powerlessness. Having promised to reverse the rise in unemployment and decline in industrial productivity, Hollande’s team has been repeatedly checked by the budgetary and monetary constraints imposed by the European Union. Having affirmed that they would protect the nation’s generous social programs, the government now faces a simmering tax rebellion. Having led the charge with the United States and Great Britain in the buildup to a military intervention in Syria, Hollande looked over his shoulder to find his erstwhile allies busily retreating.

Most tellingly, having embraced the inclusive and humanitarian legacy of French socialism, a legacy formed by the likes of Jean Jaurès and Léon Blum, the government has floundered on the critical issues of security and immigration. Inevitably, those to the right and far right of the Socialists have relentlessly harped on these themes. A leader of the conservative Union pour un Mouvement Populaire, former Prime Minister François Fillon, recently suggested that, if forced to choose between the extremist Front National and the Socialists in the upcoming municipal elections, conservatives should vote for the “least sectarian” party.

Which one that is, Fillon did not say — nor did he need to. The UMP has been playing a desperate game of catch up with the FN, but to little avail. Last week, a poll revealed that nearly one out of two respondents believe that the FN’s leader, Marine le Pen, is the best candidate to oppose Hollande in the next election. This builds on an earlier poll finding that three quarters of the French find le Pen to be “a real leader.” One need not look far to find the reasons: While the conservatives are willing to parlay any idea to win an election, Lepenism has just one idea — return France to the French.

The “Roma question” looms large in this context. That the “question” exists is already telling: There are no more than 20,000 or so foreign Roma in France — mostly from Romania and Bulgaria, and distinct from the 300,000 native Roma already in the country. Yet, for many French, they seem to be everywhere. The rise in petty crime has been laid at their feet, while those very same feet, usually bare, crisscross train stations and boulevards in search of handouts and loose change. They have become the face of the Other: a seemingly indissoluble alien population serving as both cause and effect of France’s fraying social fabric and deepening economic distress.

Leonarda’s school bus drove straight into this storm. The socialist Minister of Interior Manuel Valls has been as relentless as his conservative predecessors: This year alone, more than 3,000 foreign Roma have been arrested and expelled from France. While Valls’ popularity among voters has skyrocketed, it has divided the ranks of the left. With the arrest of Leonarda, his critics like the Green Party’s Daniel Cohn-Bendit and the left’s Jean-Luc Mélenchon immediately invoked the infamous rafles: the roundups of Jews in 1942 by French police.

In an effort to unify his followers, Hollande declared that while the law was justly applied, France would allow Leonarda to return and finish school. This move understandably satisfied no one. In fact, it has encouraged the UMP to propose changing France’s nationality law, based on the concept of jus soli. This formidable legacy of the French Revolution, one that has profoundly benefitted Jewish refugees and immigrants to France, is now threatened. Clearly, Marine le Pen is not the “real leader” France needs, but neither, it appears, is François Hollande.

Robert Zaretsky is a professor of history at The Honors College at the University of Houston and is the author of the forthcoming “A Life Worth Living: Albert Camus and the Quest for Meaning” (Harvard University ).