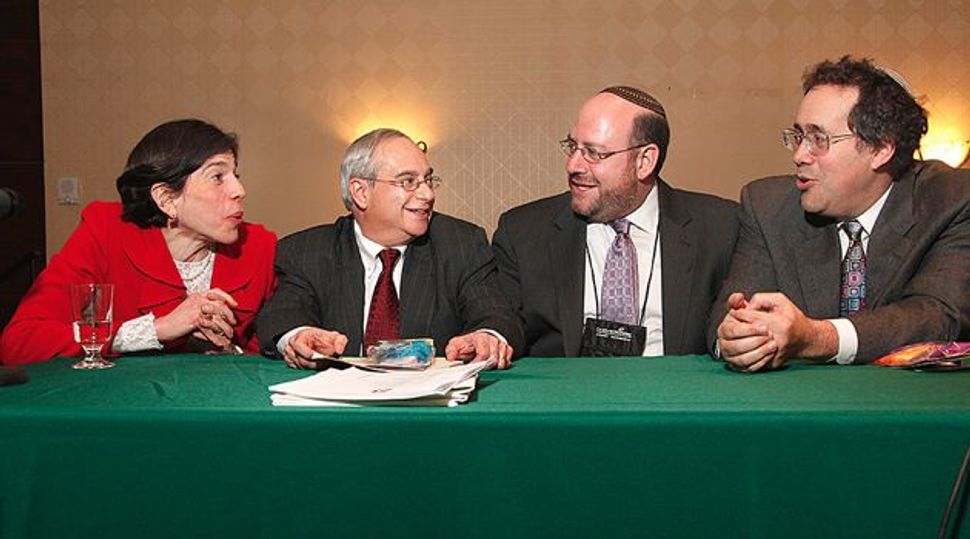 One of the most striking findings in the recent Pew Research Center survey on Jews in America is the massive decline of Conservative Judaism. While 43% of American Jews affiliated as Conservative Jews in 1990, just 18% do so today. This is causing much soul-searching in the Conservative movement.

The reasons for this decline are surely complex. I believe that one factor is the failure of the Conservative movement to nurture young leaders from its ranks. I would like to relate my own experience, in the hope that this will contribute to the conversation about how to renew Conservative Judaism.

My family observed the Sabbath. Each week we had Sabbath meals, walked to synagogue and did not drive. We kept kosher at home, and outside we ate only vegetarian food. We celebrated all the holidays.

I was very active at my parents’ synagogue and proudly identified as a Conservative Jew. I went to Jewish schools through the end of high school and attended Camp Ramah. After graduating high school, I spent a year at Hebrew University, where I focused on academic Jewish studies. I later earned a doctorate in German and Jewish philosophy at Indiana University, and now I teach at New York University.

By all rights, I should be a Conservative Jew. Yet, if the Pew pollster had called me, I would not have identified as one.

As a youth, I had internalized what I understood to be Conservative Jewish values by being very committed to Halacha and Jewish learning. But I found that my family was one of the very few in my synagogue that valued these things. While the pews overflowed on the High Holy Days, they were sparsely filled on a typical Sabbath, and almost no children attended. My family rarely went out for Sabbath meals, as few families at the synagogue prepared them.

Before my bar mitzvah, I was very involved in the synagogue service. I led the end of the Sabbath morning davening each week, attended morning minyan and read the Megillah on Purim. But after my bar mitzvah, as I sought to study more Torah, I found few outlets at my synagogue. So at the suggestion of a friend who was also raised Conservative, I began studying Talmud at a local ultra-Orthodox kollel. As my graduation neared, I approached my Conservative rabbi for advice about studying at a yeshiva after high school. At the time, there was no Conservative yeshiva, and he recommended that I attend an Orthodox one in Israel.

I was told that Conservative Jews were as serious in their commitment to Halacha as Orthodox Jews were, but they differed in that they recognized halachic change. But as I knew no Conservative Jews who cared about Halacha, my teenage sensitivity to inconsistency led me to see Conservative Judaism as inauthentic.

I was also dissatisfied by what I saw as the self-preoccupation of Conservative Judaism. While Orthodoxy saw itself as fulfilling God’s will through halachic obedience, and Reform Judaism as saving the world through social justice, or tikkun olam, I was constantly being encouraged to work for the advancement of the Conservative movement. I felt no mission driving Conservative Judaism, which for an idealistic youth was highly unsatisfying.

I also sensed a certain superiority from Conservative rabbis I encountered. They constantly recounted how the Jewish Theological Seminary had attracted great scholars such as Louis Finkelstein, Saul Lieberman and Louis Ginzberg, and how by contrast Orthodoxy was unscholarly and uncritical. But already in my time those great European scholars had died or retired, and the religious value of having housed those great critical scholars was not at all evident to me.

I felt that Conservative Judaism was distracted by what I saw as political rather than religious issues. The burning issue of the day in the Conservative movement was egalitarianism and the ordination of women. My synagogue was not egalitarian, although women could be called to the Torah on special occasions. The argument was made that egalitarianism was crucial to keeping Jews affiliated.

After my year at Hebrew University, I spent a second year in Israel, studying at an Orthodox yeshiva. When I returned to my synagogue in Montreal, people were certain that I wished to become a rabbi, although I had no intention of or interest in doing so. I began to feel unwelcome at my Conservative synagogue, as many people thought that my religious passion made me Orthodox. I felt increasingly uncomfortable with the formality and halachic carelessness of the prayer and what I regarded as the lack of seriousness and knowledge among the congregants. Having no outlet for my religious enthusiasm at my Conservative synagogue, I started attending an Orthodox one on the Sabbath, although it was a considerable distance from my home.

I am fully aware that my family’s halachic observance and my interest in Jewish study and practice were highly atypical for Conservative Jews. But the Orthodox synagogue that I now attend includes many families in which at least one spouse was raised by one of the few observant families at their Conservative synagogue.

Many people are thinking about how to revitalize Conservative Judaism. This is important, as the world needs a vibrant Jewish religious center. From my experience, I would recommend one thing above all else: Support and nurture the most committed Conservative Jews at local synagogues. Give them outlets for their religious curiosity and passion. These Jews may not write big checks. They may sometimes make the less committed members of the synagogue feel uneasy. But they are the future.

Michah Gottlieb is an associate professor in the Skirball Department of Hebrew and Judaic Studies at New York University. His book “Jewish Protestantism: Translation and the Turn to the Bible in German Judaism” will be published by Oxford University Press.