We Are All Russian Jews Now 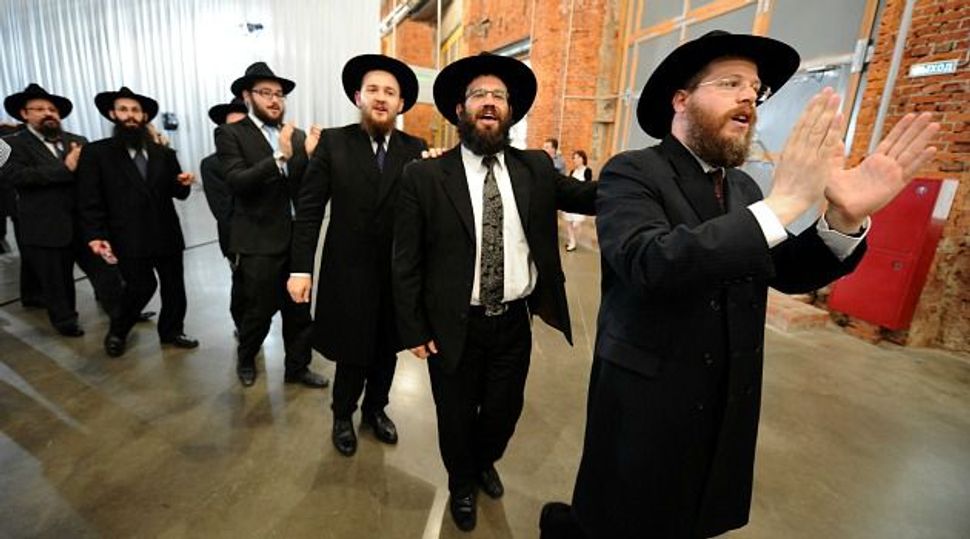 Russia Today: Jews celebrate at the opening of a new museum in Moscow. Russian Jews have long considered being Jewish to have little direct link with religious practice. Image by Getty Images

In the wake of the Pew Research Center’s findings on American Jews, the Forward’s headlines told a disheartening story: “Boundaries Are Blurring,” “New Study Finds Jews Fleeing Faith Traditions” and “Can You Be Jewish and Believe in Jesus?”

But for Jews in Russia and Ukraine, none of this was news.

With two Russian colleagues, in 1992–1993 and in 1997–98, I conducted extensive face-to-face surveys of 6,600 Jews in Russia and Ukraine. The findings foreshadow the Pew results. It seems that American Jews are following post-Soviet Jews in their “blurring of the boundaries” between Christianity and Judaism, and are disconnecting their cultural or ethnic Jewishness from Judaism as a religion.

Russian-speaking Jews see little connection between the two. Being Jewish for them is belonging to a “national’nost,’” an ethnic group. American Jews seem unsure whether they are a religious or ethnic group; many duck the issue by declaring themselves “cultural Jews.”

There is no such ambiguity among Russian Jews. Asked which in a list of 17 components “are essential to being a ‘good Jew,’” very few chose religious mandates like keeping the Sabbath or circumcising sons. Nine of 10 Jews in Russia and Ukraine did not observe kashrut, despite two decades of activity by religious emissaries.

Yet, about half our respondents said they “believe in God” or that they were “inclined to such belief.” But even among believing Jews, as among religious Russians, belief in God did not translate into observing a religion. Jewish believers did not follow commandments, nor did they see God as intervening in human history— two major premises of Judaism — to any greater extent than nonbelievers.

Since the fall of communism, synagogues have functioned as community centers, drawing Jews to them for the “fun holidays” of Purim and Hanukkah. Most Jews go to synagogues not to pray, but to express sentimental attachments to tradition and Jewishness. As an employee of a Ukrainian Jewish organization put it: “I am not religious… but I try to attend a synagogue for Jewish holidays or celebrate those holidays with my own people, observing all the rules traditional for each holiday. I do that in order to preserve the traditions and not for religious reasons…”

Historically, Jews have drawn two boundary lines to define themselves against others: A Jew cannot practice a faith other than Judaism, and a Jew should not marry a non-Jew. These boundaries helped preserve the Jewish faith and the Jewish collective.

But in the Former Soviet Union, boundaries between Judaism and Christianity are blurring more rapidly than in the United States. In our studies, only a third of the respondents would condemn Jews who convert to Christianity.

The other boundary — prohibiting Jews from marrying non-Jews — has also eroded more rapidly among Russian Jews than in the United States. The Soviet state encouraged inter-ethnic marriage as a means of overcoming “outmoded superstitions,” promoting understanding among the nationalities and advancing toward the “mutual assimilation of nations.”

In 1926, the intermarriage rate was 3% in Belorussia and 5% in Ukraine, but 17% in Russia. By 1936, the rates had climbed all over the USSR, with a large leap, 37%–42% percent, in Russia. Following mass emigration between 1971–2007, the “Jewish marriage market” shrunk and intermarriage rates skyrocketed.

Today probably eight of 10 Jews marrying in Russia marry non-Jews. Demographer Mark Tolts has calculated that in Russia, three of four children born in 1998 who are Jewish according to Halacha have non-Jewish fathers.

The political and cultural contexts in which American and Soviet Jews lived could hardly have been more different. In the USSR, all forms of Jewish education and meaningful religious life were gone by the late 1940s, whereas in the United States neither state nor society places any limits on Jewish culture or religion. Soviet people were expected to be at least a-religious and preferably anti-religious, while the United States has long been the most religious society in the West.

True, both the Soviet state and the dominant American ethos encouraged ethnic assimilation: Soviet “fusion of nationalities” was paralleled by the American “melting pot.” But paradoxically, the Soviets insisted on identifying people by their ethnicity, making Jews an officially recognized ethnic group, unlike in the United States, and thus they inadvertently preserved Jewish identity.

Among American Jews, religious forms remain the dominant modes of ethnic and cultural expression and affiliation — secular Jewishness long ago weakened with the demise of the Yiddish and Hebrew cultural movements. To the extent that religion weakens, so does institutional American Jewishness. In the FSU, where Soviet state-sponsored and supervised Yiddish-based Jewishness had failed by the 1940s, Jewish identity depended far more on boundaries than on religion or culture. To some extent, boundaries have lasted longer in the FSU than the religious and cultural content of American Jews.

On both sides of the ocean, those committed to Jewish continuity as identity and as a culture are seriously challenged by a secular trend away from institutionalized religion, the absence of a national language and the increasingly “thin” nature of what passes for Jewish culture. The Pew study shows that American Jews, who had all the cultural and religious facilities during the seventy years that their Soviet brethren had very few, are “catching up and overtaking,” as Nikita Khrushchev liked to say. It’s a race that committed Jews would not like to see anyone win.

Zvi Gitelman is a political science professor at the University of Michigan and the author of “Jewish Identities in Postcommunist Russia and Ukraine: an Uncertain Ethnicity” (Cambridge University Press, 2012).

We Are All Russian Jews Now