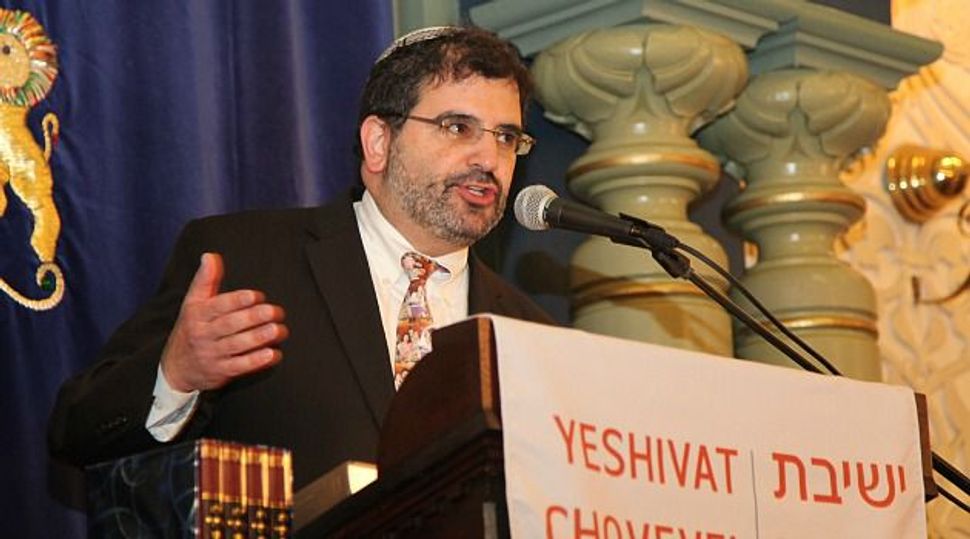 Image by courtesy of YCT

Readers of Israel’s Haaretz.com, many of them liberal and secular, must have been surprised to read, in late October, a public manifesto, signed by 42 members of the Rabbinical Council of America castigating “Open Orthodox rabbis and leaders” in the United States.

The signatories — none of them, it should be noted, an officer of the RCA — charged their own colleague, Rabbi Asher Lopatin, and other leaders of Open Orthodoxy, with “unilaterally violating normative Orthodox laws, customs and traditions,” and with plunging ahead “again and again, across the border that divides Orthodoxy from neo-Conservatism.” If the Open Orthodox “feel some distance developing between themselves and mainstream Orthodoxy,” the manifesto concluded, they had only themselves to blame.

As readers of the Forward know, Lopatin, the new president of the liberal Orthodox Yeshivat Chovevei Torah Rabbinical School, had already been feeling a little “roughed up” from attacks on him by the fervently Orthodox Agudath Israel and the right-wing Orthodox newspaper Yated Ne’eman. In an earlier article in Haaretz.com, Lopatin argued in defense of his institution that “no one has the authority or the religious standing to write someone out of Orthodoxy.” Recalling the disastrous effects of previous heresy-hunting efforts in Judaism, such as the persecution of the Sadducees and the Hasidim, he called upon his Orthodox colleagues to “respect each other’s understanding of what Orthodoxy is.”

The public manifesto in Haaretz represented some of those colleagues’ less-than-respectful response to Lopatin’s plea. The manifesto carried the headline “Violating Orthodox Law and Custom, Dividing Our Community.”

Beyond the irony that an internal debate among American Orthodox rabbis was published in a secular newspaper that many Israeli Orthodox rabbis refuse even to read lay a deeper historical irony. When the RCA was established in 1935, its own members had to defend themselves against charges that they were violating Orthodox law and custom and dividing the community.

The men who leveled those charges were members of the Agudath Harabonim (Union of Orthodox Rabbis), founded in 1902 by European-trained rabbis who represented Judaism’s right wing. They believed that only those ordained in traditional European talmudic academies and personally ordained by an Eastern European rabbinic luminary had the right to carry the title “rabbi.” Most of those rabbis who were ordained by the Rabbi Isaac Elchanan Theological Seminary, the seminary of what was then known as Yeshiva College, were barred from the organization. European-trained rabbis harbored many doubts concerning the secular studies taught at the college. One well-known rabbi, Elchanan Wasserman privately described the institution as “a center of apikursus [heresy] and shmad [apostasy].”

As the number of American-trained Orthodox rabbis swelled, it became necessary, since the Agudath Harabonim would not admit them, to create a new rabbinic organization for English-speaking rabbis trained in America. That organization, the product of a merger among several smaller ones, became the Rabbinical Council of America. One of its earliest public statements, according to its longtime member and historian, Rabbi Louis Bernstein, looked to refute an article written by a leader of the Agudath Harabonim declaring that only its members “were really rabbis while all others were deceiving the public.”

In 1939, the Agudath Harabonim went after Abraham Goldstein, who is one of the pioneers of the modern kosher food industry and the chemist who, among other things, devised the O-U symbol of kashrut and helped to establish Modern Orthodoxy’s Kosher Certification Service. “Mr. Abraham Goldstein,” the Eastern European rabbis charged, “is a thorough ignoramus in matters Jewish.” As a Modern Orthodox Jew, they alleged, he had “impudently assumed authority to decide in matters of kashrut.” The rabbis warned that he was “misleading the Jewish public.”

Today, it seems, the travails of the early RCA rabbis who withstood the attacks of those to their right and established a thriving English-speaking American Orthodoxy have been all but forgotten. Like the 17th-century Puritans, who left England to escape its persecution of religious dissidents and in America promptly began to persecute dissidents of their own, so the 42 signers of the RCA manifesto now accuse Lopatin and Open Orthodoxy of the same sins once leveled against their own founders. In a tale as old as religion itself, yesterday’s heretics have become today’s heresy hunters.

A deeper issue, however, also underlies the battle concerning “Open Orthodoxy,” and that is the question of inclusivity versus exclusivity. Orthodoxy’s growth over the past half-century has relied on, like Protestant evangelicalism, an inclusive model. Seeking to compete with liberal Jewish movements, Orthodoxy stretched its big tent to embrace Modern Orthodoxy, Chabad, the “yeshivish” Orthodox and the Hasidic enclaves, like Satmar. Plenty of bickering took place internally, but for the most part Orthodoxy’s major wings learned from the bitter experience of earlier decades that peaceful cooperation would serve all of them better than open warfare would. The calamitous decline suffered by the Conservative movement when the Reconstructionists on the left and the traditionalists on the right angrily abandoned that movement’s big tent served as an object lesson as to why it was so important for inclusivity to be preserved.

Nowadays, though, the Orthodox community feels increasingly secure. Recent studies, including the New York Jewish Population Survey and the Pew Research Center study, indicate that its numbers and influence are rising. In more right-wing corners of the movement, which are growing the fastest, triumphalism reigns supreme.

This mood is a natural breeding ground for those seeking to create a purer, holier and more exclusive Orthodox community, one that will adhere more punctiliously to “Orthodox laws, customs and traditions.” Indeed, the RCA itself has recently fallen victim to this trend. Hamodia: The daily newspaper of Torah Jewry, ran an editorial last June, titled “The Hypocrisy of the RCA.” To those who listen closely, indeed, there are growing indications that the Orthodox “big tent” is straining, as religious policemen at home and abroad push for ever more exclusive definitions of who belongs within the Orthodox fold and who should be excluded.

Against this background, the battle over Lopatin and Open Orthodoxy takes on greater significance. The Orthodox infighting played out in Haaretz.com and other venues is not about just, as the 42 signers of the manifesto would have it, the border dividing Orthodoxy from “neo-Conservatism” (a religious movement that, until now, nobody has ever heard of). It is instead a battle over the nature of Orthodoxy itself: whether it will be inclusive or exclusive; whether the Orthodox big tent will continue to hold up or collapse on itself.