Let’s Celebrate the Convergence of Thanksgiving and Hanukkah 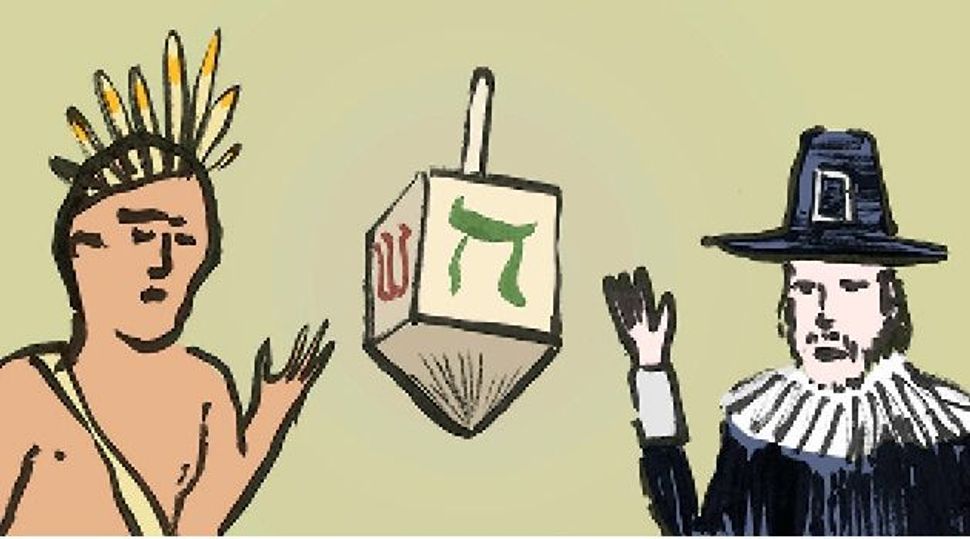 This year’s confluence is a once-in-about-2,000-lifetimes experience. Hanukkah and Thanksgiving on the same day last happened in 1861, except that Thanksgiving wasn’t established until 1868! And the next time the first day of Hanukkah will happen on Thanksgiving — Thursday, November 28 — will be in the year 79,811. Who can plan that far in advance? So let’s enjoy this solar and lunar overlap and celebrate all that Hanukkah and Thanksgiving have in common. Religiously, there is a direct line connecting Thanksgiving, Sukkot and Hanukkah. Here’s how it works.

American Thanksgiving had a close affinity to biblical Sukkot. Both holidays included the theme of giving thanks for a bountiful harvest. It’s likely that the pilgrims who linked their migration and experience with the ancient Israelites learned to thank God for their harvest from the stories they read in what they called the Old Testament.

And Sukkot, in turn, was very much linked to Hanukkah. In fact, Hanukkah may have actually been Sukkot. The Second Book of Maccabees records that after the Maccabees cleansed and rededicated the Temple, “the sanctuary was purified on the twenty-fifth of Kislev (Hanukkah). The joyful celebration lasted for eight days. It was like Sukkot, for they recalled how only a short time before they had kept the festival while living like animals in the mountains, they observed the joyful celebration, which lasted for eight days. And so they carried lulavim and etrogim and they chanted hymns to God, who had so triumphantly led them to the purification of the Temple.”

So Hanukkah was probably a delayed Sukkot, with its theme of Thanksgiving spilling over from the harvest into the cleansed and rededicated Temple. The overlap of American Thanksgiving with the Sukkot/Hanukkah Thanksgiving, then, is not a calendrical oddity, but a calendrical tour de force.

We are accustomed to Hanukkah’s proximity to Christmas and to the influence of that holiday on some of the cultural celebrations of Hanukkah. In reality, Christmas and Hanukkah are thematically opposite. Hanukkah celebrates the affirmation of Torah through both a war against the Syrians and a civil war. Christmas celebrates the birth of Jesus, whom Paul and the early church fathers understood as replacing the authority of the Torah. On the other hand, Thanksgiving, Sukkot and Hanukkah all share a theme of giving thanks: in the first two, for the harvest; in the last, for the rededication of the Temple.

So here’s to giving thanks for this unusual but perfect confluence. It’s not just the culinary ease of substituting latkes for sweet potatoes with the turkey. There is a core message that links them together beautifully.

Gerald L. Zelizer is the rabbi of Congregation Neve Shalom in Metuchen, N.J.

Let’s Celebrate the Convergence of Thanksgiving and Hanukkah