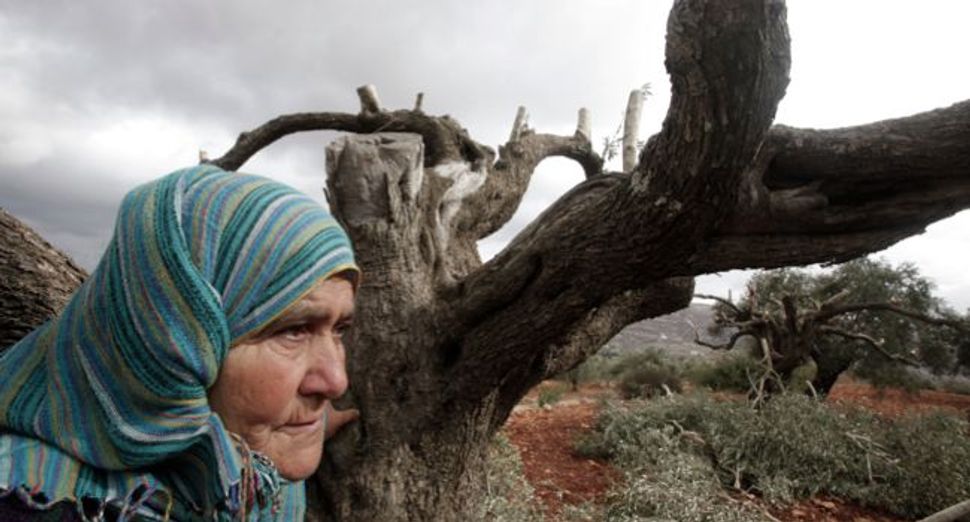 A Kind of Terror: A Palestinian woman holds onto at a destroyed olive trees in the northern West Bank village of Qarut on October 19, 2013. Image by Getty Images

Jan Psaki, a State Department spokesperson, characterized Benjamin Netanyahu’s announcement in early November of plans for thousands of new settlement homes as not conducive to “steps that create a positive atmosphere for continued negotiations.”

The mild and familiar American condemnation is certainly true, but off the mark, considering the very negative atmosphere created by daily acts of violence committed by Jewish Israeli citizens against West Bank Palestinians, their natural resources and their property. Hundreds of Palestinian olive trees have been destroyed by settlers in various incidents, so many it is hard to keep count. Six hundred in Nablus on October 30. Two days before that, a Palestinian farmer’s head was cracked open by settlers wielding iron bars from the illegal outpost Adei Ad. And just before that, settlers from Yitzhar attacked both Palestinian farmers and Jewish Israeli volunteers from Rabbis for Human rights with clubs, resulting in four injuries. The list goes on and on.

These incidents — now particularly heightened during the olive harvest season — are not the aberration from the norm, but a regular feature of life in the occupied West Bank. In 2012, over 7,500 Palestinian olive trees were destroyed. In the 5-year period between 2007 and 2011, there was a 315 percent increase in settler violence.

Saying there is no “positive atmosphere” because of new settlement plans is thus a glib understatement, almost disingenuous. The atmosphere Israel perpetuates has been anathema to any kind of goodwill interaction with Palestinians for quite some time. You don’t need new settlement plans to see this. It is clear from an array of factors both on the ground and in the halls of Knesset, among them, just to name a few: IDF arrests of Palestinian children, shooting at unarmed protesters, and the fact that numerous top ministers in the coalition openly oppose a two-state solution, the establishment of a Palestinian state, and the secession of East Jerusalem.

But the issue of settler violence is different not only because it is brutal violence in in broad daylight, but also because the Israeli government can easily — and does — shirk responsibility, conveniently pointing a finger at a small group of fanatics.

Settler violence happens primarily in areas of the West Bank (B and C) where Israel has full control over security, and is legally obligated as the occupying force to protect the Palestinian civilian population under its control. They go far beyond acts of revenge committed by settlers reacting to what they deem to be “anti-settlement” Israeli policy decisions (known as “price tag” attacks — which by the way, Netanyahu and the state prosecutor opted not to deem as “terror”). They are more than hate crimes. They are a concerted campaign of terror perennially waged against the occupied Palestinian population in the West Bank.

According to Yesh Din, 97.4 percent of the complaints submitted between 2005 and 2013 regarding damaged Palestinian olive groves in the West Bank were closed by the Samaria and Judea District Police without any indictments filed. There is countless footage and documentation (I myself have witnessed first hand many times) showing the Israeli army and police standing by as violence takes place, or failing to take action against those responsible, or simply failing to prevent the incident. In some cases soldiers and settlers are also clearly working in cahoots.

Amira Hass recently reported in Haaretz that defense officials have kept Israeli attacks on Palestinian olive groves a secret from public knowledge and the media. In Israel, it is only because of human rights organizations like Rabbis for Human Rights, Yesh Din and B’Tselem that these issues get any coverage at all. An Israeli soldier serving in the West Bank is trained to protect Jewish citizens first and foremost — it is after all, as Netanyahu constantly reminds the world, the Jewish state. Whether or not a Palestinian can access water from his well or graze his sheep or harvest his olives without being stopped by a vigilante settler is not Israel’s primary concern. And if that Palestinian comes to the conclusion that fighting to remain on his land is just too dangerous and he must move to a more populated city center, then Israel has achieved a win for its de facto policy: Maximum land, minimum Palestinians.

As Yousef Munayer wrote in the Daily Beast’s Open Zion blog, “As de facto state agents, the settlers are doing the work that might be too controversial for the Israeli military to be directly involved in for public relations purposes but still serves the larger aim of checking and demoralizing a Palestinian population.”

As the sovereign body in the occupied West Bank, the IDF — and by extension the Israeli government — is responsible for everything that happens there, whether they are directly involved or not. It is therefore time to call a spade a spade: Settler violence is a major component of the Israeli government’s war of attrition against the Palestinian population. It’s time the U.S. state not only that new settlements don’t help create a “positive atmosphere” for talks, but that the Israeli government and its old settlements and old policies have already created a very negative atmosphere — not just for talks, but for the basic human rights of millions of people.