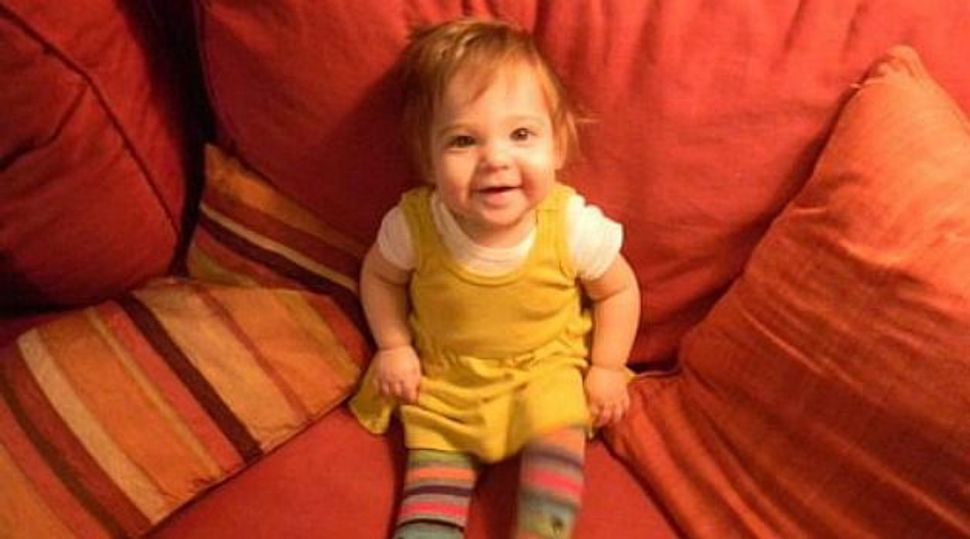 Ayelet Galena’s death at the age of 2 from a rare bone marrow disease launched a wave of grief around the world. For months, thousands followed the little girl’s fight for her life with the Eye on Ayelet blog, set up by her parents, Hindy Poupko and Seth Galena.

But more than a year and a half after Ayelet’s death — and a year after Hindy Poupko made the Forward 50 — the little girl’s memory lives on.

“People continue to give to her donor circle without us even asking,” Poupko told the Forward in a phone interview. “We’re always surprised that it’s still on their radar.”

This silent but constant support is what helps the still-grieving mother find the strength to move forward. Most of these acts of kindness are subtle, more substantial than grand, but often empty, gestures.

Ayelet’s story first grabbed the attention of Forward readers with a series of touching stories by then-Director of Digital Media Gabrielle Birkner. Hindy Poupko’s inspirational effort to harness the grief landed her a spot on the Forward 50. And readers made her the surprising choice as the most clicked-on profile in the package, outpacing dozens of far more well-known figures.

Poupko recalled that even this week, she was cc’d on an email chain as part of her role as Managing Director and Director of Israel & International Affairs for the Jewish Relations Council of New York. Scrolling through the exchange, she noticed something peculiar:

“By the way, December 5 is Ayelet’s birthday,” someone had written to the others involved.

Poupko was stunned. “It was such a beautiful thing,” she said. “It’s one thing to remember a yartzeit, it’s another to remember a birthday, especially in such a work environment. I was really moved by that.”

Reminders of her daughter, Poupko added, often come out of the blue. From time to time, with no warning, she’ll receive an email announcing that someone has moved up in the bone marrow donor registry, due to her daughter’s now vacant spot on the list.

“That’s the most amazing way to keep her memory alive because you’re in the middle of your workday and this email pops up, and you’re told of a life changing event that your daughter played a part in,” Poupko said.

The blog that kept the family going in the hardest of times is still active; Poupko and her husband update it from time to time, mostly to keep in touch with the virtual community they created. In early November, Galena’s brother Isaac ran the New York City marathon in memory of his niece. A picture of his bright red jersey with white letters boldly reading “For Ayelet” was posted for all to see.

“It’s less about planning and making decisions for a visible goal and more about dong what feels right in that moment,” Poupko explained. “We found a great deal of comfort in the community that was created around us.”

So much so that the couple now try to give the same comfort to other families in pain, using the same kind of creative virtual support that they received.

In the aftermath of the Newtown shootings in December 2012, Galena set up an initiative known as “Tacos for Noah,” in honor of six-year old victim Noah Pozner’s favorite food. Each visitor can create a virtual taco in his memory, complete with a special ingredient (“Beef? Cheese? World Peace?”) and tweet it out as a wish. So far, 10, 638 tacos have been created.

“The majority of things that happen to keep Ayelet’s memory alive happened because other people initiated them,” Poupko explained. “God willing, we can play a role in doing something similar for people in need. ‘Tacos for Noah’ is a great example of that.”

In September, Poupko and her husband returned to the hospital where their daughter died more than a year and half ago. On the wall of the floor where Ayelet was cared for is a testament to her strength: her picture is surrounded by the pictures of the children who have made it, with a description of their condition and the years passed since their transplant.

Under Ayelet’s picture, an inscription reads: “Though she be but little, she is fierce.”