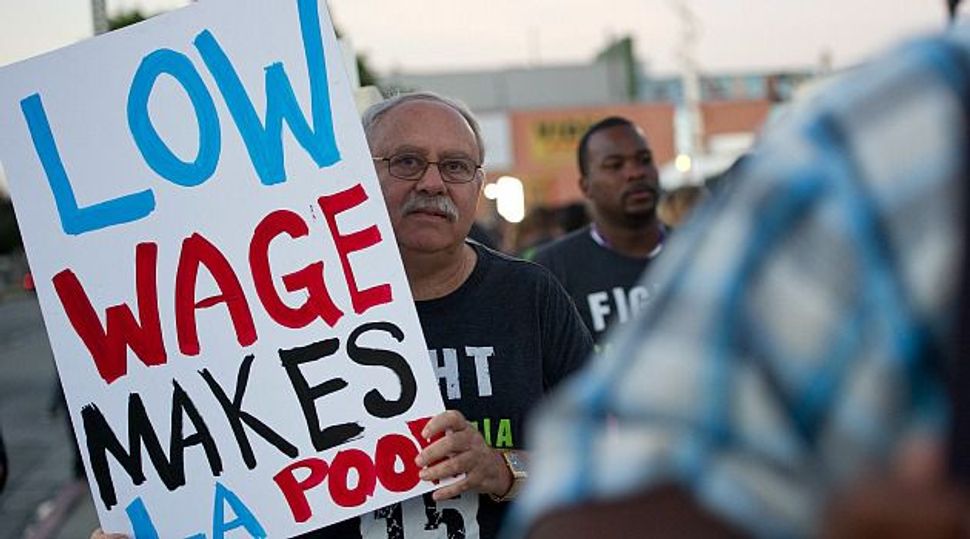 As Congress stalls yet again on measures to raise the unconscionably low federal minimum wage, states are instead leading the charge. In New Jersey, even as voters overwhelmingly gave Governor Chris Christie a second term, they disregarded his position on the issue and approved an increase to $8.25 an hour.

This year alone, four other states — New York, California, Rhode Island and Connecticut — have raised their minimums above the $7.25 an hour mandated by Congress four years ago and static ever since, bringing the total number of states to 21. Almost half.

But we’re still talking about earning, at most, $9.32 an hour, and that’s only if you live and work in the state of Washington next year. Some Democrats and President Obama want a federal minimum of $10.10, which would barely bring a worker’s earning power back to where it was in the 1960s, adjusting for inflation.

Plenty of Jewish organizations are on record supporting some increase in the minimum wage and are doing the requisite lobbying and educating, debunking the argument that such an increase will hurt employment, which it demonstrably won’t. But why wait? Why wait for Congress or state legislatures to act? Why can’t the Jewish community draw on its own religious teachings, legal texts and moral values to decide to pay everyone within its employ a living wage?

This is not a random idea. It is incorporated into the criteria that Uri L’Tzedek developed to encourage kosher restaurants to treat employees fairly, and was supposed to be part of the Conservative movement’s grand plan for a new ethical kosher seal — plans so grand that, years later, they appear to have gone nowhere.

A responsum approved by the Conservative’s Committee on Jewish Law and Standards in 2008 stipulates that employees should be paid a living wage. Rabbi Jill Jacobs, who wrote the teshuva, said that afterward she was deluged with phone calls from rabbis who wished to comply but felt stymied by lay leaders worried about synagogues finances and — the surprising part — by how to deal with early childhood educators in Jewish schools who are dramatically underpaid.

Meantime, Rabbi Paul Drazen, speaking on behalf of the United Synagogue of Conservative Judaism, told the Forward that his organization is working on ways to “help guide congregations in their decisions.” He added: “It’s committee work, so it moves slowly.”

Well, that’s an understatement. Five years on, and nothing to report? It seems to us that any organization, not just a Conservative one, lobbying for federal legislation should first ensure that it is walking the walk in its own schools, synagogues, JCCs, federations and advocacy groups, and encourage everyone else in the Jewish community to do the same.

“Raising the minimum wage is actually a mitzvah,” Rabbi Shmuly Yanklowitz, Uri L’Tzedek’s founder and president, wrote recently. “The Rambam says that ensuring others have work that can sustain them is the highest rung of the hierarchy on how to give tzedakah.”

Imagine how much more effective the Jewish voice on this issue would be if this became a nationwide communal priority.