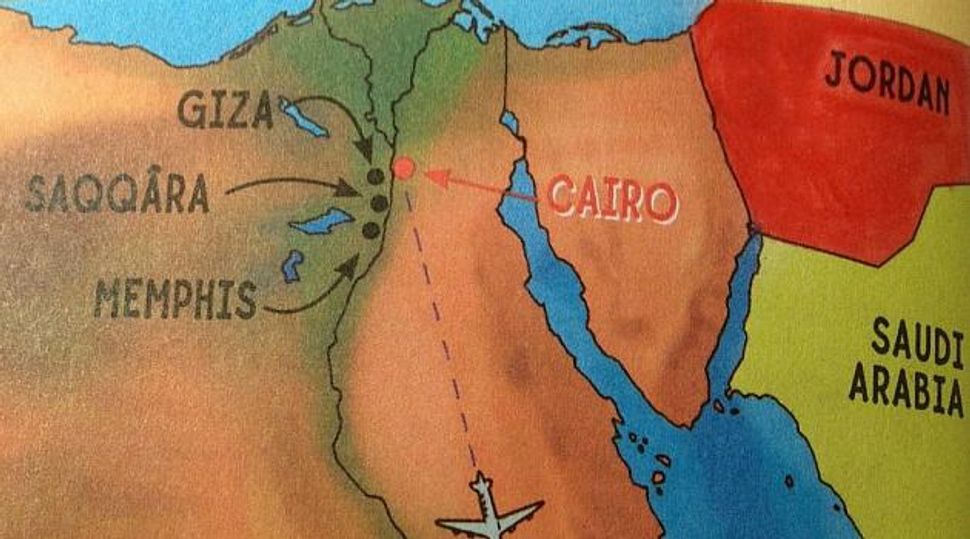 Comedian Benji Lovitt made light of recent news that Scholastic had published a children’s book with a map omitting the State of Israel with a satirical blog post in The Times of Israel. He joked that Iran was behind the illustration that showed the Jewish State (as well as the West Bank and Gaza) as part of Jordan. But others are taking the error — if it was indeed unintentional — much more seriously.

Scholastic, the largest publisher of children’s books, is a brand parents, teachers and students rely on for a steady stream of quality reading material through the company’s book fairs and monthly book order clubs. It has many Jewish-related titles, including the first-ever fantasy fiction novel set at a Jewish summer camp.

As soon as Scholastic became aware of the inaccurate map, it issued an apologetic statement:

As you have probably heard, Thea Stilton and the Blue Scarab Hunt, a title in the Geronimo Stilton series, published by Scholastic, includes a map that inadvertently omits Israel. Scholastic is immediately stopping shipment on this title, revising the map, and going back to reprint. We regret the omission which was in the original version of the book published in Italy and was translated by our company for English language distribution.

Rachel Aranoff of White Plains, N.Y., the mother of four school-age children doesn’t think the company’s plans go far enough. “Scholastic’s decision to stop selling the book was the right one, but it is not sufficient. They should also investigate how this ‘error’ occurred,” she said, implying that the omission of Israel was intentional on the part of someone along the chain of production.

Calling what happened “an anti-Semitic incident,” she will consider not buying any more Scholastic books, unless a thorough investigation is conducted and the results publicized.

Not everyone is jumping to the conclusion that the incorrect map was intentional. Allison Kaplan Sommer, a writer and mother of three in Raanana, Israel, is fine with Scholastic’s apology and promise not to sell the faulty books anymore.

“For me, they were clearly unaware. It was more of a mistake than an intentional act. If they had hesitated or tried to justify, I would feel differently of course,” she said.

Howard Freedman, director of San Francisco’s Jewish Community Library whose daughter is currently reading Scholastic’s blockbuster “Harry Potter,” said he, too, would be upset by the situation if the omission of Israel turned out to have been on purpose. But knowing what he does about the publishing industry, he is inclined to believe that it was the result of sloppy editing.

“Scholastic is a big company that churns out hundreds of books annually, so, until I learn otherwise, I’m guessing that this was an act (probably deliberate) that was not caught by an editor, rather than a signal that the company has a problem with Israel or is trying to curry favor with the Arab world (after all, calling the entire territory Jordan doesn’t exactly please most anti-Israel activists),” he said. “ Unless it is shown that there was a directive to erase Israel, I’m inclined to believe that the company has an incompetence problem, rather than a political problem.”

Some parents are using this controversy as a teachable moment. Aranoff, a rabbi and Jewish educator, said she would use it as an opportunity to explain to her children and students that there are significant segments of our world that deny Israel’s right to exist. “I would tell them that those who deny Israel’s right to exist are strong and that we must never take a break from supporting, loving and watching out for the Jewish state,” she stated.

Sara Shapiro-Plevan, a Manhattan-based Jewish educator and mother of a young son, is taking this as a reminder to work with children on critical reading and thinking skills. “It isn’t just the text that we need to be careful about, we need to be careful about the images as well. We know how a poorly selected picture can change the feel of a text, and we now see how a poorly selected map can do the same,” she noted.

Finally, there are those who suggest that bringing children in to the fray may not even be appropriate. Liba Kornfeld, director of family life at the JCC in New Orleans, asked her son, who has been reading the “Geronimo Stilton” series, if he had already read the title in question. He told her he hadn’t.

“It’s good to check out what our kids really do know and what they don’t know,” she offered. She’s not sure yet whether she is even going to tell her son about the map mishap.