Without Arik, There’s No One To Sing 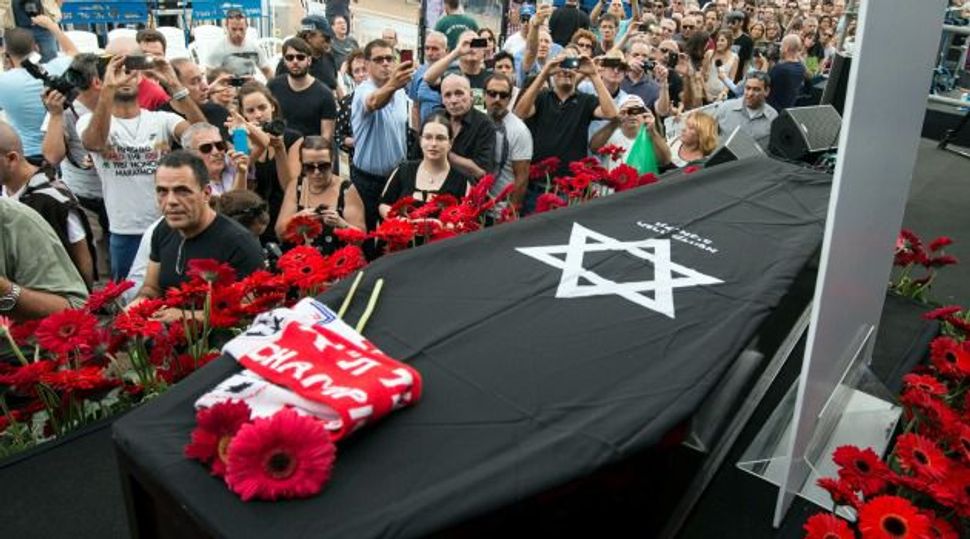 For my American friends: Its hard to describe what is going on today in Tel Aviv and all over Israel. The entire country is in a state of mourning, and even the weather has joined in with grey overcast skies.

Its days like these though, that I love being Israeli. There is an overwhelming feeling of solidarity, grief and unified love for a man who was a cultural icon. Only one voice is on the radio: people on the street are all talking about one thing. These are the days that you can’t imagine happening in America.

Late last night my husband received a text message: Arik Einstein is dead. We turned on Channel Two just as the head of Tel Aviv’s Ichilov Hospital appeared. Flustered and sweaty — he looked as though he had just been crying, and as if he might start again at any moment — he explained that Arik had suffered an aortic aneurism and that the doctors had been unable to save him. “There is nobody to sing to us anymore,” he said, before he turned and left.

Einstein, 74, was known as the king of Israeli music. He was beloved and revered by all, but he did not live as a celebrity. A very modest figure who didn’t like to perform and hadn’t given a concert since the early ’80s, he was known for touching the essence of Israeli culture. He came to popularity in the ’60s just as Israel was building its culture and his songs represented everyday Israeli life. He wasn’t rich and lived a normal upstanding Tel Aviv life, above the scandals that have become common occurrences for celebrities here. He ushered in the era of Israeli rock and helped many young artists get their start.

Today, my Facebook page was full of personal posts — letters to Arik about what he meant to my friends. As well as the airwaves, the very air itself seemed to be singing Arik from every store, café and conversation. At my local bakery, where they were busy preparing one thousand jelly doughnuts for the first night of Hanukkah, the tables were empty. “It’s a strange day,” said the manager. “Arik… and Hanukkah together… it’s so sad when we’re supposed to be celebrating.”

Thousands of people turned up at Rabin Square, to hear the Prime Minister and many well-known musicians and Arik’s friends, before the funeral procession to Trumpeldor Cemetery a few blocks away. I ran into a friend — singer Micha Biton — outside the cemetery. “When I was a kid, I used to sing his songs. I mean, I would have shows and perform covers of his songs,” he said, totally distraught. As we walked into the cemetery it started to rain. “Even G-d is crying,” said Micha.

I tried to imagine what American figure would occupy this role: Elvis? Perhaps. But you can’t say that Elvis is a symbol of America or that he sang about being American. And I’m not convinced that all Americans, generation after generation, still listen to him as they listen to Arik. So it’s hard to describe to my American friends how all-encompassing this public grief feels.

Before I made Aliyah, I fell in love with Israeli music. All kinds of Israeli music — old folk songs, hip-hop, rock, almost all of it. I’ve often tried to understand what makes Israeli music different. There is an emphasis here on lyrics and language. Songs with great lyrics are quoted often — everywhere, and become expressions — part of the Hebrew language. I find myself knowing all the words to Israeli rock songs that I like. There can be a totally famous rock star with a mediocre voice — but it doesn’t matter because there’s a connection with the substance of the song, not just its manifestation.

Israeli music might not always be that different from American music, but society appreciates it differently. There is a respect for writers, poets, and artists who might be famous and yet still be eking out a meager living. There is a lack of cynicism for words that ring true. Lyrics that might sound “cheesy” in English, can be appreciated as truth in Hebrew. It’s not about mass culture, fame, financial success or selling millions of albums, but about touching people.

So Arik — with his words and his personality, and his whole being — made contributions that became the foundation of Israeli culture. And that has affected everyone, from every corner of society.

But the fact is that, even if they were motivated by nostalgia, the throngs of people who were waiting to place a stone on Arik’s grave, were all mourning together. It was impossible not to feel the human unity of loss in Israel today. And that’s something that I never felt when I was living in LA. The head of the hospital would be grave, solemn, but extremely professional, and probably wearing a tie. His heart wouldn’t be on his sleeve, knowing he was delivering terrible news to a whole nation. He wouldn’t say, “There is nobody to sing to us anymore.”

And I realize that I like that. I like feeling that I’m a part of something. I’d rather get bad news by someone that looks like he’s about to cry. It’s not professional or clean. But it’s human.

Without Arik, There’s No One To Sing