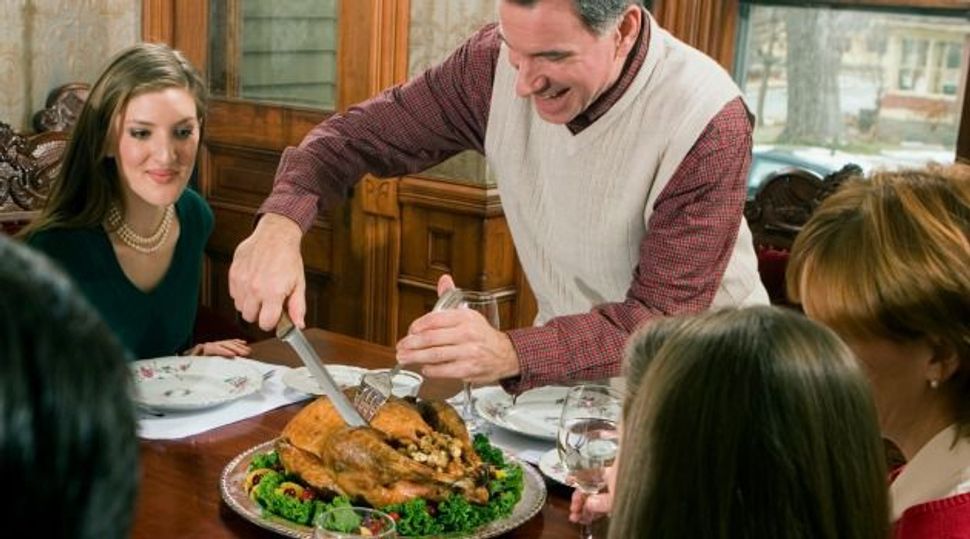 This year’s convergence of Hanukah and Thanksgiving, which, we’re told, will not be repeated until 70,000 years from now, leads to a question: Which celebrates the greater miracle?

The question may seem misplaced, even impertinent. We understand Hanukah as a celebration of miracle; no miracle is associated with Thanksgiving. Yet I mean to argue that Thanksgiving is, in fact, the more miraculous of the two.

As to the Hanukah miracle, oil that was meant to last for just one day lasting for eight, yawn. It is a miracle without meaning, without implication, without resonance. [I cannot resist re-telling my mother’s explanation for the elevation of this minor holiday into a major landmark of the Jewish calendar. As she put it, having come to the days with least daylight, at a time when, because of the imminence of Christmas, Christian passions were at their height, Jewish children were kept at home. How better amuse them than with games and toys?]

Ah, but Thanksgiving. It is a holiday very much like Passover (albeit with considerably less ritual). Just think: Suppose the Pilgrims had found a wild boar instead of a turkey. We’d have been locked out of the holiday. Instead, we are given a festival that fits snugly into the Jewish tradition. It is a holiday preeminently about family and food – and, of course, the giving of thanks. It is a holiday with two songs attached to it, neither of which mentions Christ: “We gather together to ask the Lord’s blessing;He chastens and hastens His will to make known; the wicked oppressing now cease from distressing; sing praises to His Name; He forgets not His own… Let Thy congregation escape tribulation;Thy Name be ever praised! O Lord, make us free!” And then, “Bless this house, O Lord we pray, make it safe by night and day.” It is, in other words, a holiday readily accessible to us all.

And it is a holiday capable of sacred overtones. When I was a student at the University of Chicago, Thanksgiving day began with a worship service at Rockefeller Memorial Chapel, with its distinctive carillon beckoning people to come together, which, in large numbers, we did. And the giving of thanks was easy and natural there: We were partners in one of the world’s great institutions of higher education. That was sufficient to enable a sense of genuine community, itself cause for thanks.

These days, more often than not, as we go around the festive table, each expected to find a specific about which to be thankful, we quickly run out of steam. Not that there’s not ample foundation for gratitude, but because our expressed specifics tend to be perfunctory. The core reasons for gratitude are not readily articulated at a meal that tends to be noisy and, depending on the age of the children, teeters on the edge of chaos.

This year, there is, alas, a political edge to the celebration. We celebrate plenitude while SNAP, the food stamp program, is being cut. The most vulnerable among us – often, elders and children – are left to depend on the food pantries and soup kitchens of charitable organizations rather than on a government that offers a safety net – or, more accurately, that offers civic compassion – to all.

I don’t get it. Thanksgiving is a holiday about, among other things, coming together. Yet rarely has there been a greater sense of our coming apart. And the irony, as the holiday approaches, is that the arena that best exemplifies our coming apart is the arena of food, where the current debate in Congress is whether to reduce food stamps by four billion dollars or by ten billion dollars.

It’s not, mind you, that SNAP offers its recipients a sumptuous diet. Hardly; $1.40 a meal cannot accomplish that. Nor is it, by that way, about fraud and other waste. The SNAP program in remarkably well-managed.

Then what is it about? Not the deficit, since we know that SNAP dollars will be spent on food, and thereby act as a stimulus to the economy. No, I fear that it about a new stinginess, a fracturing of the long-time consensus on the proper role of government. These days, the best illustration of where we are is that Walmart – by far the nation’s largest (non-governmental) employer with over two million employees, more than one percent of all working Americans – is asking its employees to drop off food for – you guessed it – their fellow employees.

Thanksgiving: We are, indeed, blessed. There is more than enough food in America to feed, nourishingly, all our inhabitants. Yet food insecurity (also known as hunger) is a common affliction, affecting tens of millions of our neighbors. So the great miracle, the real miracle, awaits, and is for us to beget.