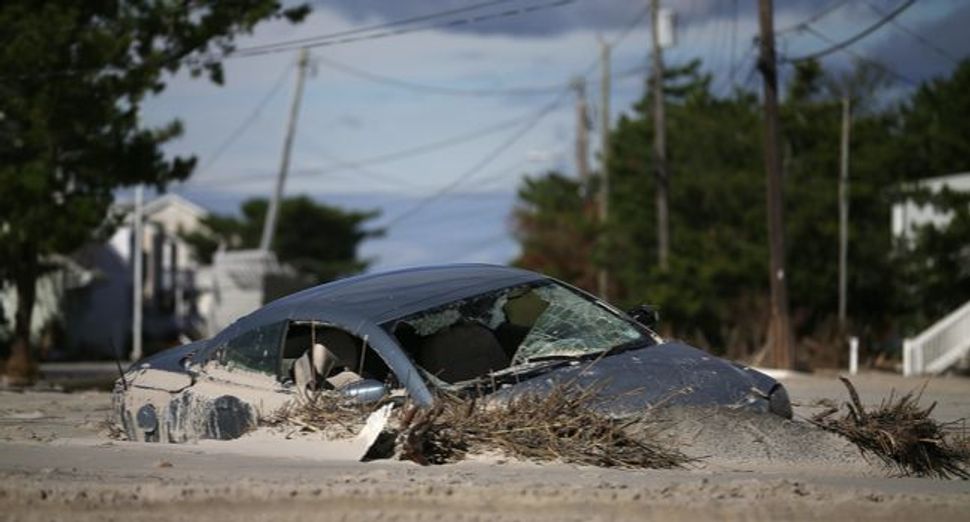 Under Water: Sandy left communities like the Rockaways in deep despair. Image by Getty Images

It has become my annual ritual. I flippantly say, minutes before the first night of Hanukkah, “I’m going to 116th Street to blur the separation between church and state.” Apparently, some very well-meaning and generous person from Indiana donated a large, electric menorah to the Jewish community of the Rockaways following 9/11, because our community had suffered so many losses among the first responders.

While I have always been deeply appreciative of the gesture, making sure that our Jewish community’s symbol was represented alongside the Christmas tree that shared the median of 116th Street, I have my doubts that this isn’t constitutionally kosher.

At heart, I remain deeply ambivalent about the public display of religious symbols in the “public square.” Mostly I remained closeted (until now) about my views, even if this annual event did bring the three major denominations of Judaism together. I temporarily put my personal church-state separation issues aside, because the value of Klal Yisrael trumped my inner Hanukkah-in-the-public-square Grinch.

But last Hanukkah, I didn’t have to be flippant or tell anyone that I was going to 116th Street to “blur the separation between church and state.” Last year’s first night of Hanukkah, December 8, Beach 116th Street looked like a war zone, 40 days after Superstorm Sandy dealt a very harsh blow to the Rockaways. There was no Hanukkiah to light, the Jewish community had been dispersed, and only generators brought light and noise to the broken, boarded up, deserted street.

And yet, as an ardent church-state separationist (with the exception of my annual Hanukkah lapse), how do I reconcile my principles with what I did on a steamy afternoon this past July, going to Washington DC to lobby for federal funding to help rebuild religious institutions that suffered Sandy’s wrath? I did not consider myself either opportunistic or hypocritical. Nor was I interested in lobbying to get a foot in the door for other forms of government support of religious institutions or schools. I merely wanted to help our legislators understand that religious institutions are a backbone of every community and provide non-sectarian support to neighborhoods. What was the mantra of Jewish communal work? Strong Institutions build Strong Communities.

And West End Temple was no exception. In addition to running a superb community early childhood program, we also host AA, Alanon, Girl and Boy Scouts, Weight Watchers, neighborhood association meetings, candidate debates, US Census training, Lego Camp—all programming that strengthens the vitality of our community, none of which is uniquely religious. As a rabbi, I only wish as many people attended our synagogue services on Shabbat as those who religiously attend Weight Watchers each Tuesday night!

Besides, looking around the devastation, it was difficult to see a church state issue. Five feet of salt water, hitting every building in the community, didn’t discriminate. And if there were a fire in our temple, would the firemen avoid our building because we are a religious institution? If there were a robbery, would the police not come because they can’t cross the threshold of a synagogue? Why should West End Temple – a key to our community’s survival and revival – be discriminated against for relief from a disaster that no one asked for, and from which we all suffered? And so, it was for those reasons that I went with a delegation of Jewish and other religious groups to lobby various senatorial staff to sign on to a new bill that Senator Kirsten Gillibrand had submitted to the Senate asking that the Stafford Law be amended to permit funding from the Federal Emergency Management Agency to include houses of worship in their list of private non-profits that are eligible to receive government funding. The House of Representatives had already passed legislation, and it was now up to the Senate to do so as well. The Senate bill was even stricter than the House bill, stating clearly where FEMA money could be applied, so that some of the concerns articulated by the ACLU and Americans United for Separation of Church and State would be assuaged. Unfortunately, this bill, like so many others is stalled in Washington, and who knows when and if it will ever see the light of day.

I remain firmly committed to the separation of church and state, but not the separation of church and storm. I would not dream of requesting funding from FEMA to replace any of our sacred objects or books, but given the enormity of the devastation of our building, and other houses of worship devastated by Sandy, I cannot understand why FEMA funding is not available on the same basis as it is to other non-profits.

Last Hanukkah, our dispersed community celebrated together at Aviator Sports Complex, thanks to the generosity of so many of my colleagues and their congregants of the Reform movement. And during Hanukkah last year, at the conclusion of our volunteer clean up days, as the sun would set, we adorned our lovely tall electrically-powered (and thus unfunctional) Hanukkiah that sits on our temple property with face masks colored with yellow magic marker, after I climbed a rickety ladder to place the masks over the flame-shaped bulbs. We sang blessings and Hanukkah songs, adding a new face mask for each of the eight days of Hanukkah. This Hanukkah, we will celebrate in one of the rebuilt rooms in our temple, and our outdoor Hanukkiah has been re-wired. We will light it on our temple property to publicize the miracle of Hanukkah and the miracle that our community is back home.

But guess what else I am going to get to do on – Hanukkah this year? I am going to say to someone in the office, “I’m going to 116th Street to blur the separation between church and state.” It seems that the donated Hanukkiah, which we all thought was lost with so much else of our community’s property and history, was stored on the second floor of Brown’s Hardware Store rather than the basement and survived the storm. Perhaps it’s another Hanukkah miracle?