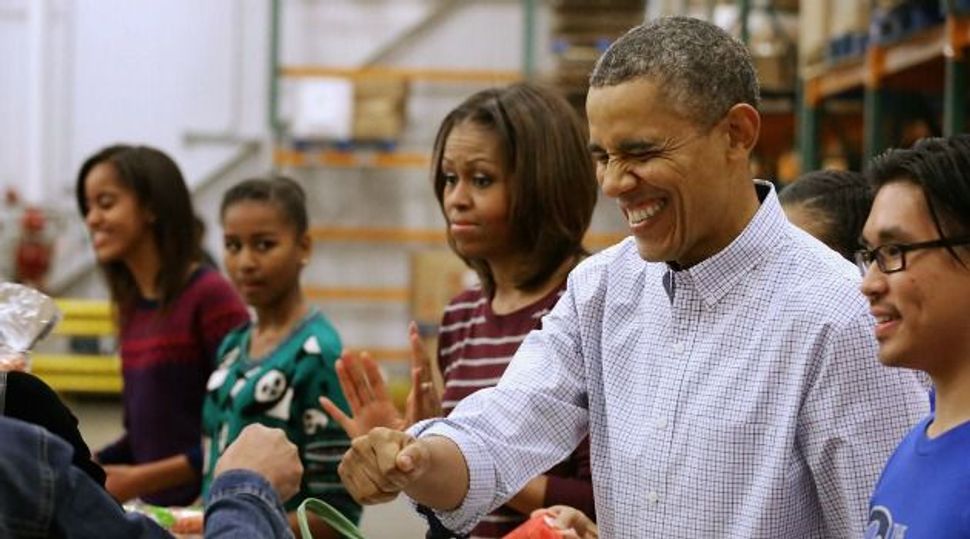 “For the first time since the late 1800s – and for the last time until some 70,000 years from now – the first day of Hanukkah falls on Thanksgiving. It’s an event so rare some have even coined it “Thanksgivukkah.” As we gather with loved ones around the turkey, the menorah, or both, we celebrate some fortunate timing and give thanks for miracles both great and small.”

Very nice. But a sentence in the next paragraph caught my eye:

“In the face of seemingly insurmountable odds, [the Maccabees] reclaimed their historic homeland. But the true miracle of Hanukkah was what came after those victories almost 2200 years ago – the Jewish Temple was cleansed and consecrated, and the oil that was sufficient for only one day lasted for eight.”

With this sentence, the White House has — inadvertently, I’m sure — taken a side in an old, latent Israeli debate over what the “Hanukkah miracle” really was.

Like almost every Jewish holiday, Hanukkah has something for both secular and religious Israelis. Secular Israelis see in Hanukkah an epic story that prefigures the birth of the modern state: a small, informal army — facing seemingly insurmountable odds — defeats a more powerful foe and creates an independent Jewish commonwealth. For non-religious Jews who find little to no meaning in the Second Temple and its sacrifices, the miracle of the oil is an afterthought.

But for religious Israelis, the war that liberated the land was just a prerequisite for the holiday’s real miracle: the small jar of oil lasting eight days – enough to reinstate the Temple service. In a similar vein, some modern Orthodox Israelis see the current, secular state as a stepping stone toward a coming messianic era when Jewish religious law will guide Israel.

The debate even emerges in two alternate Hebrew spellings of the word “Maccabee.” One spelling, with the Hebrew letter kuf, means “hammer” — emphasizing the Maccabees’ strength and the military victory. It’s the word’s popular English translation and also the inspiration for this gem of a film.

But the more common Hebrew spelling is with the letter kaf, which makes the word an acronym for the phrase “Who is like you among deities, God?” — stressing the Maccabees’ divine inspiration.

You probably won’t find people fighting in the streets of Jerusalem over the correct interpretation of the Hanukkah miracle. But for those who are counting: score one for the oil.