‘Bethlehem’ a Film About Israeli Agents and Their Assets 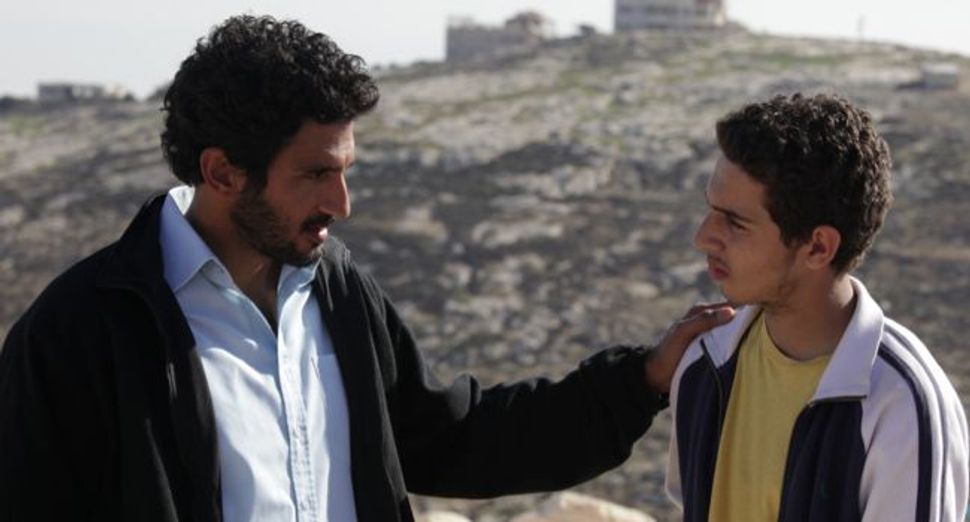 “Bethlehem” is this year’s Israeli entry in the foreign film Oscars. Having won the Ophir award for best Israeli feature film at the Haifa International Film Festival, it went on to win the best director, best actor, best supporting actor, best editing and best casting awards as well.

“Bethlehem” will not be generally available for a couple of months; I saw it as a special sponsored by the Boston Jewish Film Festival. I write here to urge you to see it at your first opportunity, whether as part of a festival or when it is in general release. I do so with mixed feelings, since the film is, in a word, painful — painful because it is so very real, so utterly dismal, so glum in its portrayal of the human condition, Israel/Palestine style. And yet it is a must see film — a film without good guys, without moments of grace, relentless in its depiction of a world of assets and handlers, and it is utterly convincing. “Assets,” we are quickly alerted, are manipulable people with access to the enemy — however and by whomever “enemy” is defined. Because of their access, they have information, and it is for their information that their handlers coddle, threaten, play with them.

One tries to pierce through the netherworld Bethlehem presents, but in the end is left to wonder whether there is any other world at all. Yet of course there must be. There are, for example, the worlds of the film’s creator, Yuval Adler and his Palestinian co-author, Ali Waked, who studiously avoid a white hat/black hat drama. hough there is charisma to spare in some of the roles, the film is studiously non-judgmental.

In a nutshell, Bethlehem is the complicated story of a Shin Bet agent (read “handler,” the sort of man who can pick up his intercom and ask his secretary to “get asset 626” on the line) and a Palestinians teenager whose older brother is the Shin Bet’s most wanted man. The younger brother can never come close to matching the older, and his disturbed solution to living in his brother’s shadow is to become an informant — an asset, that is — of the Shin Bet. In turn, the Shin Bet both protects and relentlessly exploits Sanfur, the teenager.

Some will object that the Hamas operatives are depicted as people rather than as monsters. The causes of their murderous discontent are revealed only in hints, while the Israelis are in search of the mastermind of a Jerusalem bombing. In that sense, the film does take sides, but the sides do not intrude at all. A friend, exiting the showing when I did, stopped to ask me whether it is really that bad — meaning not just the behavior of this side or that, but the entire nightmarish set of relationships the chronic struggle has begat.

And who can these days say where handling begins and where it ends — if it does? In the hyper-surveillance state we have now learned we inhabit, are we not all targets for handling? No, not the overt kind the film unrelentlessly depicts — not yet, anyway — but at least in potentia. “Out there,” everything we do and much of what we think is known. Today, that knowledge is used chiefly for commercial reasons — to shape the ads and sale pitches we receive. It is also and increasingly being used to mobilize us politically. And all this still in the early days of metadata collection and storage.

The National Security Administration does what it does because it can. It offers security rationales for its collection of data, but the rationales are limp. The generally applicable rule in the world of technology is that if can be done, it will be done, whether the rationale be limp or persuasive. (We’ve not yet begun to figure out how to manage a world where 3D printing is easily and inexpensively available.)

But Luddism is not a useful response, even if there are moments when one wishes the whole edifice of technology would disappear. (Let there be fountain pens and letters, the cloud be damned.) The issue is not and will not be whether to applaud technological advances or to condemn them. (The best that those who condemn them can come up with is to attack technology with technology. That’s what hacking is about.)

But: Guttenberg invented movable type in 1440, and the Internet is still in swaddling clothes, and between the two signal breakthroughs we have democratized knowledge beyond the wildest dreams of earlier times. The issue before us is how all this glitzy technology will be used. (The optimist: “Ah, this is the best of all possible worlds.” The pessimist: “I’m afraid you’re right.)

Odd, even ironic: There’s something pristine about the deeply personal entanglements of Bethlehem. They are so resolutely human, hence reassuring, for all their darkness. Alas, we cannot have it both ways.

‘Bethlehem’ a Film About Israeli Agents and Their Assets