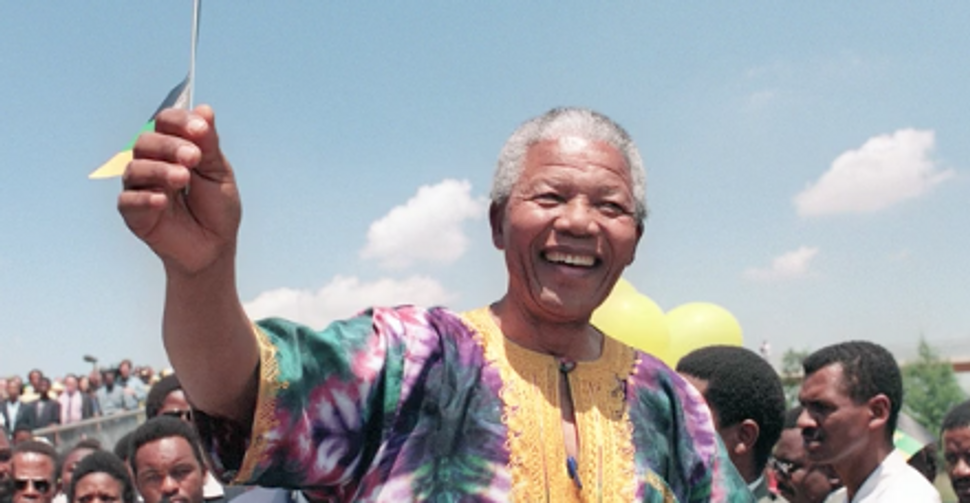 Few people have had the impact on their community that Nelson Mandela had on the history of a continent. Often compared to Mohandas Gandhi or to Reverend Martin Luther King Jr., the South African leader demonstrated throughout his lifetime how compassion and forgiveness could go a long way in divided societies. Mandela’s legacy of peace offers vital lessons for the human race as a whole, and specifically for the Jewish world.

“He raised the moral imagination of humanity in terms of what was possible to do in order to change the world for the better, and was an extraordinary inspirational model for people involved in social justice work,” said David Saperstein, director of the Religious Action Center of Reform Judaism (RAC). “I think that struck a particularly strong cord with the Jewish community.”

In 1963, when Mandela was charged with sabotage and conspiracy to violently overthrow the government, his defense team at the trial included attorney Nat Levy, a native of Cape Town. Despite the efforts of Levy and his colleagues, Mandela was convicted and sentenced to life in prison. Levy, who immigrated to the U.S. in the late seventies and today lives in Houston, remembers how excited he was when Mandela was freed on February 2, 1990. The two renewed their acquaintance in 1993, when Mandela visited America to receive the Liberty Medal.

I think what Mandela did for South Africa and for the world is to prove how attitudes can change a country for the better, and how that could potentially change situations in many parts of the worlds, including the Middle East. Levy pointed out that the fall of the apartheid regime could have led to massive bloodshed, if not for Mandela’s peaceful approach. “Until such time when political and religious leaders will change their attitude towards groups that are in opposition to them, I think we’ll continue to have problems.”

Israel’s approach to the prisoner-turned-president has changed as it shifted from support to condemnation of the apartheid regime. Alon Liel was based in South Africa during the late eighties and the early nineties, first as an advisor for the Israeli Ministry of Foreign Affairs and later as Israel’s ambassador in Pretoria. Liel met Mandela many times and thinks the most important aspect of the South African leader’s attitude was his desire to maintain a conversation with those who opposed him, and not disregard them.

“For many Jewish people, if somebody attacked them once, he’s erased. If they registered you as an enemy, you are an enemy forever,“ said Liel, noting Israel’s relation to former president Jimmy Carter as an example of his country’s mistreatment of those that criticize it. “But when somebody criticized [Mandela], he saw it as a challenge to convince that person and to turn things around. He never gave up. I think this is something that is very missing in the Israeli society and also in the character of many of the Jewish leaders in the U.S.”

For Jews who were born and raised in South Africa, Mandela was a sort of messiah.
Diana Aviv was born in Johannesburg and first learned about Mandela when she was in the Habonim youth movement. Not wanting to live under an apartheid regime, she emigrated to the United States and became a leading anti-apartheid activist. Aviv, who is currently president and CEO of Independent Sector (a network of America’s not-for-profits and foundations), suggests that from Mandela’s legacy, what is most important for today’s Jewish world is his unequivocal stance on discrimination.

“He believed that all people are equal and should be judged based on their humanity and not based on their religion or their race,” said Aviv, who met Mandela for the first time during his triumphal visit to the United States in June 1990, after his release from 27 years in prison.

Sharon Katz, born in Port Elizabeth, on the tip of the African continent, was also away from her home country when Mandela was released from prison. Her immediate reaction was to get on a plane and go home. Katz founded the Peace Train, a project that brought together hundreds of young black and white children for musical experiences and performances. She met Mandela for the first time when she was invited to sing on stage at his 75th birthday banquet in July 1994.

I talked with him about this desire that I have to bring all these children together and to load them on a train and to call it the peace train and he said “Go ahead, we need you to do this work because this is the embodiment of the idea of a non racial democracy that I have struggled for my entire life.”

In the following years, she performed in several pubic events in which the newly elected president vocalized his vision for the post-apartheid South Africa.

“Mandela would speak to the crowd for at least three hours, and he would explain why it is important to love one another, and why it is important to not to rise up violently in the streets and kill all white people,” Katz remembers, “Whenever I find myself as a human being having resentment, than I tell myself, you know what, if Mandela can [forgive], so can you.”