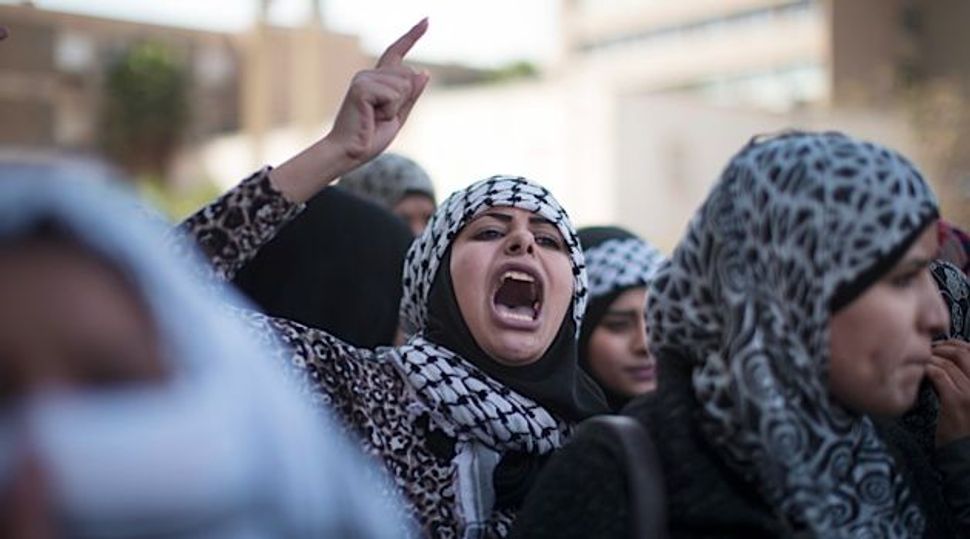 An Arab woman joins a protest against Israel?s ?Prawer Plan? which will relocate 40,000 Bedouins from their traditional villages to towns. Image by getty images

Israel is promoting a plan to transfer some 40,000 Arab Bedouin citizens from traditional villages into towns despite opposition by activists and senior government officials that threatens to derail it.

Government supporters say the resettlement would encourage development, but that was repeatedly challenged by residents of the villages in Israel’s southern Negev desert.

“It’s a bad plan, nobody here was asked. It’s racist, and means to evict people from their homes with no alternative,” said Huda Abu Ubayd, a local university student who startled government organizers of a tour for journalists by chanting slogans and passing out leaflets.

“We see the conditions of the towns. They’re weak and poor,” she told reporters visiting the landscape of breeze block homes surrounded by heaps of trash and animal pens patched together with corrugated metal sheeting.

A bill which has passed a first reading in parliament would mandate that around 40,000 Arab Bedouins from dozens of villages that are “unrecognized” by the Israeli state be forced to move into seven townships.

But criticism on the street and in parts of government may coalesce to scupper the proposed law, called the “Prawer Plan” after top Israeli planning official, Ehud Prawer.

Lawmaker Yariv Levin, the chairman of Israel’s governing coalition said this week that there was “no chance of approving the second and third reading of the Prawer bill in its present form”, noting that its authors “did not receive (Bedouin) support”, the Israeli Ha’aretz newspaper quoted him as saying.

Israel’s far right also objects to the plan, saying its vision of compensating many of the Bedouin with a combination of land and cash justifies what they see as squatting.

“The Bedouin are interested in receiving not only the ‘carrot’ – compensation and other lands, but are … against the ‘stick’ – their duty to evacuate all the lands they have populated illegally,” Israeli Foreign Minister Avigdor Lieberman wrote on his Facebook page.

“Therefore, one should re-examine the plan and consider a far-reaching plan that would annul the benefits the Bedouin were to receive.”

However, Doron Almog, an official heading the Negev Bedouin file for the prime minister’s office, denied the plan would be reworked, saying, “the plan is controversial, this is true”.

“You can still see why there’s so much need for a compromise. There are people here living in the south of Israel, see the suffering, see the poverty. It’s for the people, with the people here, the Bedouin,” he told Reuters.

Rare street protests spanning Israel and the occupied Palestinian territories over the issue last month deteriorated into clashes between Israeli forces and youths, including many young Arab citizens of Israel who increasingly identify with the Palestinian cause.

Activists say the plan is meant to change the demographic character of Israel’s south and give Jews priority in planning and building homes – policies they link to housing and movement restrictions in the Israeli-occupied West Bank.

Facing a housing crunch elsewhere in Israel, the government plans new Jewish communities in the Negev area and is in the process of moving several military bases there from the densely packed centre where land prices are much higher.

The Negev Desert is already dotted with many military bases and some of it is used as military training areas and live firing zones. Hulking aircraft and helicopters frequently fly over the Bedouin areas.

In the “unrecognized” village of Bir Mshash, a gaggle of sheds and concrete hovels amid muddy gullies, Bedouin mother of seven Um Mohammed tended to a delicate garden of cactus, aloe and purple flowers by her home.

She too was unconvinced by the plan.

“They won’t evict us. This our land and the land of our ancestors. There’s no way we’re leaving, that’s that.”