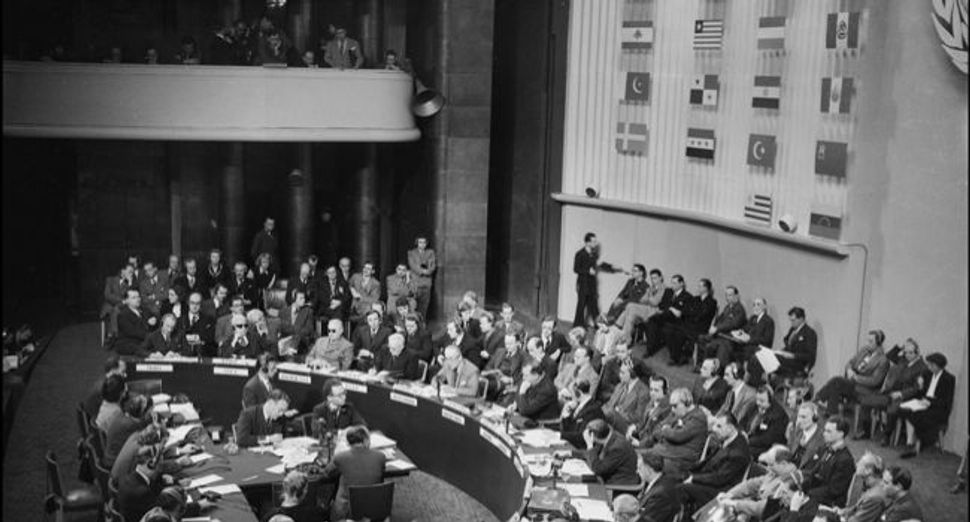 Universal: At a session of the United Nations on December 10, 1948, the Universal Declaration of Human Rights was adapted. Image by Getty Images

Well, another International Human Rights Day has come and gone. The December 10 holiday usually passes without much fanfare, but not this year. This year was pretty special.

The holiday commemorates the adoption in 1948 by the United Nations General Assembly of the Universal Declaration of Human Rights, the landmark charter of worldwide freedoms. In its day it was grandly called the “Magna Carta for all humanity.” This past December 10 was the 65th anniversary.

It’s not just the round number that makes this year’s anniversary special. There was a remarkable coincidence of timing that brought together the heads of nearly 100 nations in Johannesburg on December 10 to take leave — and celebrate the life — of one of the most revered champions of human rights of the last century.

Nelson Mandela had come to symbolize the best hopes of humanity for the triumph of our better angels. He was far from perfect, and the South Africa he leaves behind is very far from healed. But nobody in living memory came closer.

That very fact might be cause for cynicism and despair. If nobody comes closer, then perhaps this is as good as it gets. Looking at today’s world, it’s tempting to give up on the whole idea of hope. Every day brings fresh reports of outrages from nearly every corner of the globe.

Reading the Universal Declaration of Human Rights today, 65 years after its adoption, its 30 brief, eloquent articles — beginning with the startling assertion that “all human beings are born free and equal in dignity and rights,” and that all are “entitled to all the rights and freedoms set forth in this Declaration, without distinction of any kind” — seem almost quaint.

To read them now is to remember the Allies’ naïve expectation at the end of World War II that in defeating Hitler, they had begun a new chapter in human history. One by one, alas, the rights to which “all human beings” are entitled can be read negatively as a catalogue of the abuses still being committed on a daily basis, some in dark corners of oppression, some in the countries we think of as free. Freedom from slavery and torture. Equal protection before the law. Presumption of innocence. Freedom to leave one’s country, and to return.

The right of the persecuted to asylum. Freedom of thought, conscience and religion, including the right to change one’s religion. Freedom of opinion and expression. The right to own property. The right to marry whom one chooses. The right to privacy in one’s home and one’s correspondence. All written out in 1948.

Human rights were originally supposed to be part of the U.N. Charter, adopted when the organization was founded in 1945. Western leaders assumed the world body would act to guarantee the Four Freedoms that President Franklin D. Roosevelt had named in his January 1941 State of the Union address as the goals of the war he believed America must join: freedom of speech, freedom of worship, freedom from want, freedom from fear.

But Soviet objections forced the founders to remove human rights from the charter and put them off to a later date. When the declaration was finally completed in 1948 — drafted by a commission chaired by former first lady Eleanor Roosevelt — the final version included, in addition to political and civil rights, five articles declaring universal economic and social rights. These were based on what President Roosevelt had proposed in his 1944 State of the Union address, over the furious objections of Republicans, as a Second American Bill of Rights:

On December 10 Eleanor Roosevelt read the declaration to the General Assembly, which adopted it 48 to 0. There were eight abstentions: six communist nations, South Africa and Saudi Arabia.

In the decades since, the U.N. has adopted a series of treaties that flesh out the declaration and give it the force of international law. The main ones, adopted in 1966, effective since 1976, are the so-called International Covenants — one on civil and political rights, the other on economic, social and cultural rights. They’ve been ratified by all but about 30 nations, mostly a handful of Arab, East Asian and Pacific Island states.

Also, the covenant on economic and social rights hasn’t been ratified by the United States. We officially do not recognize jobs, housing or medical care as human rights.

The world may look like a pretty grim place these days, but consider this: For the first time in history, there is a global standard that nearly all nations believe they should live up to. And there has been progress. When the declaration was drafted, Hitler had been dead only three years. The ashes of Nazism were still fresh. Stalin and Franco still walked the earth. Pol Pot was waiting in the wings. They’ve all passed from the earth. There are still bad guys around, but they’re pikers compared to the monsters we once faced. Iran and North Korea don’t put people in ovens.

Today’s world is healthier, better educated and a good deal freer than it was in 1948. For the first time in human history there’s enough food to go around. What we lack is a way to get it to people. While millions live in comfort, one-sixth of humanity — 1.2 billion people — lives in extreme poverty, barely subsisting on less than $1.25 per day. Nearly 60% of deaths worldwide, some 35 million per year, result from hunger or malnutrition. Two-thirds of all child deaths, or six million per year, result from curable or preventable infectious diseases.

And in the midst of this, the world’s wealthiest and most powerful nation, its sole remaining superpower, doesn’t believe that food or medicine are human rights.

The good news is that the two men with the world’s biggest bully pulpits, Pope Francis and President Obama, have spoken out in recent days to declare economic inequality the greatest challenge facing America and the world. If they’re serious, we just might be ready for some action on humanity’s greatest shame.

Didn’t I say Human Rights Day was special this year?