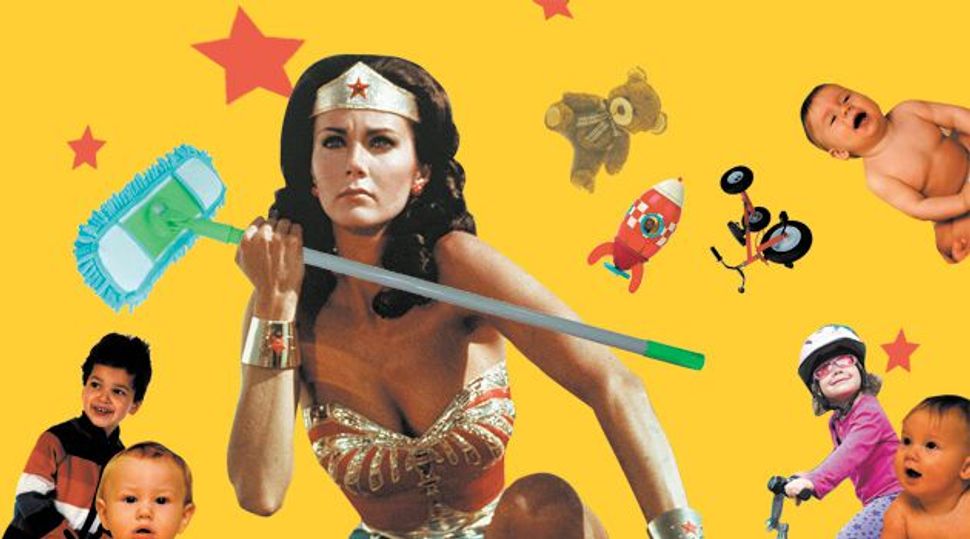 When I was about 4 years old, I had my future career mapped out: I was going to be Wonder Woman.

Sadly, my parents did not love me enough to buy me the Wonder Woman Underoos of my dreams. I did, however, have a Wonder Woman bathing suit, which was a distant second best in winter and even better than Underoos in summer. From Memorial Day to Labor Day, I would race around the town kiddie pool in my incredibly awesome bathing suit. I was the almost-kindergarten Wonder Woman pilot of my invisible plane, twirling my equally invisible lariat around would-be fugitive “bad guys.” In short, I was invincible.

The intervening years of college, graduate school, law school, work as a law firm associate, parenting, a divorce and journalism have convinced me that I am, on the contrary, very “vincible.” I am not Wonder Woman. As everyone now knows, that’s Gal Gadot.

Don’t get me wrong: It’s very important to me to be as great a parent as I possibly can be. This pursuit of “great parenting,” is in fact, I’ve found, nothing less than a pursuit of being one’s best self. It’s sort of like how you might act when you are first getting to know someone with whom you might be falling in love — but unlike a romance, this parenting thing never ends. I push myself to be more patient or, in the alternative, at least to keep my George Carlin side internal. I try to be more organized than is my natural inclination, anticipating and meeting my children’s needs for new snow boots before the year’s first blizzard. Rather than indulge bad moods, I try to surpass them and get in touch with my Maria, the Happy Governess side. The effort is tremendous, and, at least as the parent of a newborn, it’s literally 24/7.

Most of all, I attempt to be fully present. This means explaining various “whys” to my ever-questioning children without pretense or condescension. This means kissing their fevered foreheads as they toss and turn in my arms before the Tylenol kicks in when they’re sick at 2 a.m. It means letting them know that my hand will always be there to hold if they wish to hold it. It is exhausting.

But to label someone “Super Mom” because of the number of kids she has places that woman in that world familiar to us Jews: the tyranny of ever-higher expectations. Trust me, those parents of five kids already feel oddly lonely; elevating us to superhero status only makes us more anxious about the increasingly high-pressure nature of this job.

It took me awhile to put my finger on why I was so irritated every time people told me I was “Super Mom.” After all, they were saying it out of nothing but kindness. They were trying to signal that they understood that if parenting one kid is hard, surely parenting five — to say nothing of three younger than 2.5 years old, as I am – is perhaps a little too literal realization of the expression “a barrel of monkeys.” In other words, they were saying it as a back pat, a kind of parental “You go, girl!” term of respect.

But what bothered me about being called “Super Mom” was that it implicitly placed me on an invisible plane — and not the kind I’d envisioned as would-be Wonder Woman. Calling me “Super Mom” implicitly set me apart from every other parent around me in two-, three- and four-kid households, just by virtue of having one more kid. And while having five kids definitely means much more of the element of parenting that I call “air traffic control” — making sure that all kids/planes land safely on their home runways/beds, fed and loved, without colliding, at the end of the day — it doesn’t make me a freak of nature. It makes me someone oddly invested in personally disproving the Pew Research Center study, yes. But a freak? I like to think not. (Humor me.)

Because the fact of the matter is, parenting one kid is really hard. In fact, I maintain that that first kid, whether the first of five or an only, is the hardest. The first kid is the world-rocker, the game-changer — the one who catches you realizing, in the middle of your endless newborn parenting night, that all your education and life experience has been for naught because you have no clue whatsoever how to take care of a miniature human.

That first kid makes you realize that your life has irrevocably changed in more ways than you can ever describe. And every other kid after that only magnifies that change, kaleidoscopically.

A much nicer, more palatable “You go, girl,” then, is one that’s been in our heritage for centuries. It’s the Eshet Chayil — a tribute titled “Woman of Valor” (aka Wonder Woman?), in which tradition has it that a spouse sings to his or her partner about how awesome it is that they work their butts off all week, and what a great job they do keeping everything afloat. To work tirelessly and to be verbally and lovingly appreciated for it? Well, that’s pretty super, and something that can and should be said to all of us, whether we have five kids or even none at all.

That being said, I could definitely do this job a lot better if I had an invisible plane.

Jordana Horn is the former New York bureau chief of The Jerusalem Post and is a contributing editor to the parenting website kveller.com