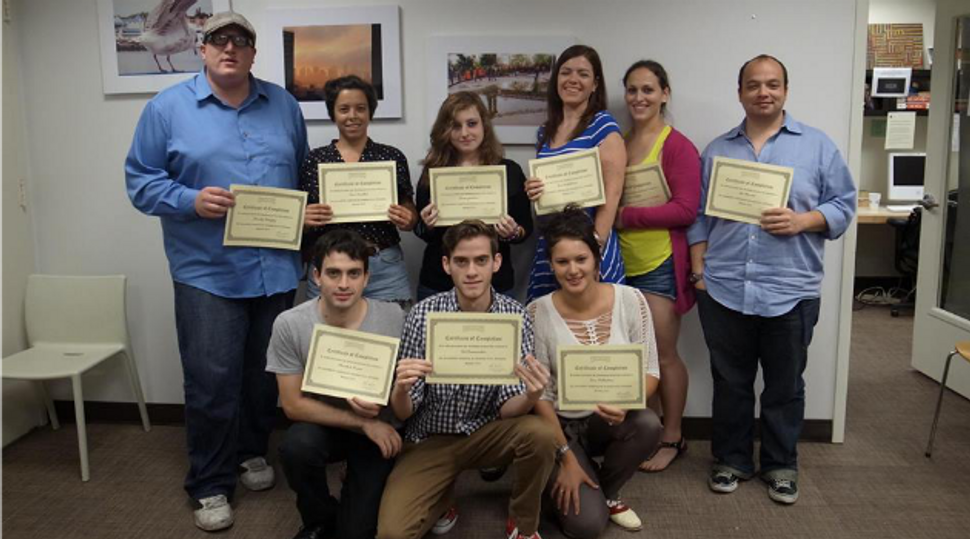 Image by Courtesy of Frimet Goldberger

Frimet (third from right), holds up her Footsteps certificate with the other fellows.

I am a Footsteps member and supporter. I am also an observant Jew.

To the critics of Footsteps, a not-for-profit organization that helps those seeking to leave their ultra-religious communities, this statement may seem like an oxymoron. Until about a year ago, I too believed that one could not remain Orthodox and be a Footsteps member at the same time — that one could not eat a plate of chulent at the Shabbos meal, completely unplugged from the world, and engage in an intelligent existentialist debate.

I became a Footstepper — the term of endearment embraced by members — this past May. Five years after leaving the Hasidic community I grew up in, but still remaining Orthodox, I finally decided to join the community of exes (ex-Hasidim, ex-ultra-Orthodox and ex-Orthodox). I’d never felt the need for social and emotional support, but until this year I had been unaware of the other resources Footsteps offers to help the exes get better education and find jobs.

Furthermore, as an Orthodox woman, I half believed the rumors flying around — that Footsteps is anti-religious, that their only goal is to get you to abandon your traditions and that all Footsteppers are losers, drug-addicts and ne’er–do–wells. I almost bought into it because I did not know otherwise. Even though some of my closest friends — successful, educated and settled individuals — had been Footsteppers for years without spewing venomous fires of atheism through their nostrils, it was still easy to think that joining Footsteps meant throwing the Jewish baby out with the cultural bathwater.

My first visit to the Footsteps headquarters in New York City was on a scorching hot Sunday morning. I was selected to participate in the Footsteps Career Fellowship pilot program — a paid opportunity for 12 members to gain meaningful work experience, develop a career network, improve their presentation, and access valuable professional support (full disclosure: I ended up using my fellowship to work at the Forward). This first welcoming workshop was designed to acquaint fellows with the program. In between panel discussions and introductions, lunch was served — turkey and ham sandwiches from a local restaurant. Oy.

But, lo and behold, there was also a kosher option. One of the staff members, knowing my history and observance, offered me a kosher sandwich. There was nothing backhanded about the provision, no awkward stares, no vicious anti-kosher remarks. To the contrary, my observance of Shabbat and Kashrut was met with respect and support throughout my summer experience. I spoke freely of it, and never felt the need to downplay my identity and love for Orthodox Jewish traditions.

There is a pervasive black-and-white attitude dominating the discourse on leaving the ultra-Orthodox communities. The idea of leaving one extreme for the other — the complete abandonment of tradition — seemed as unattractive to me as free-love hippies doing a 180-degree turn and ending up deep in the bowels of Kiryas Joel, shaving their heads and bearing many children. I understand the desire to leave behind all the stifling feelings of past traditions and customs, and I believe it is ultimately a personal choice. But for me, a self-proclaimed moderate person, I was on a hunt for the grey — for a lifestyle that cherishes many of the beautiful traditions and observances I grew up with, but also embraces progressive, 21st century thinking.

Footsteps, in a sense, represents that grey area. According to its mission statement: “Footsteps provides educational, vocational and social support to those seeking to explore the world beyond the insular ultra-religious communities in which they were raised.” Nowhere does it suggest that Footsteps has a missionary bent. It doesn’t lurk in the corners of Yeshivas looking to snatch innocent Hasidim and guide them to the light. It supports leading a self-determined life and discovering the path that works for each individual, while offering modest financial support to help people realize their dreams. Furthermore, a recent member survey showed that 20% of Footsteps members are observant to various extents. Perhaps some who choose to remain observant have felt mocked by those Footsteppers who feel burned by their religious upbringings but I did not experience any disrespect.

Instead, I’ve benefitted tremendously from Footsteps’ financial support. The fellowship stipend made my internship here at the Forward possible, and the generous scholarship I won helped me get through this last semester of my undergraduate degree.

In 2012 alone, Footsteps experienced a 140 percent growth compared to the previous year, with 95 new members and 55, respectively. Of interest is that 27% of Footsteps members — the largest group according to Footsteps 2012 intake stats — is of Satmar origin, followed by 24% Yeshivish, 20% other Hasidic sects, 10% Lubavitch and 19% “Other.” The size of the Satmar community compared to other Hasidic sects notwithstanding, this number may be telling of the disenchantment with radical Hasidism of late. Satmar has radicalized over the years, especially in the past decade or so, as I explored in another post, which seems to be alienating many of its members.

Toward the end of my fellowship, at the wedding of two fellow Footsteppers, I caught up with Lani Santo, Footsteps’s executive director. I expressed my surprise at discovering that some Footsteps staff members are observant. Santo seemed unfazed; the organization was never meant to defy religious observance — to be a catalyst for a lifestyle free of religion — but rather to help those who sought to leave their ultra-religious communities. There were clear things it could do to help these people integrate into the general society, Jewish or otherwise — societies they may know little about.

This ideology is evident in the video (below) produced in honor of Footsteps’ 10th Anniversary celebration. Four weeks ago, on a chilly Thursday evening, I wiggled my way into a cocktail dress and those too-awful-to-walk-in heels to attend the 10th Anniversary Gala and Bash with my husband and friends. Members mingled with donors and staff, celebrating the past ten years of important work while looking ahead to the next ten years.