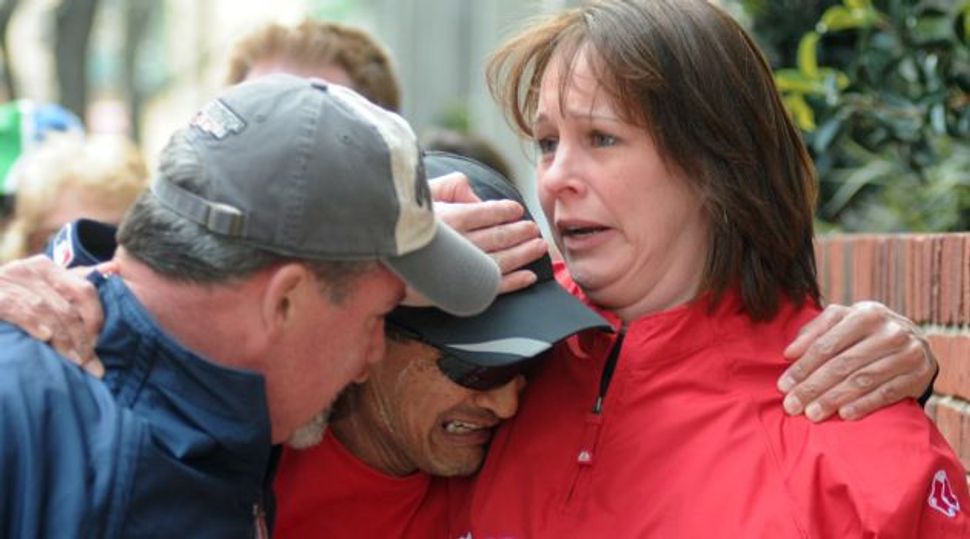 The Bad: Runner John Ounao crying when he finds friends after several explosions rocked the finish of the Boston Marathon in Boston, Massachusetts, on April 15, 2013. Image by Getty Images

It’s that waning time of the year again, a time to look back at the events that informed and shaped the last twelve months.

Obviously, the overwhelming news of the last year was the victory of the Boston Red Sox in the World Series. But, this being a serious newspaper, we cannot be distracted by childish pursuits, so let’s get on with it.

Our review covers (some of) the bad, the indeterminate and the good.

Bad: Two items that will long be remembered. First, the Boston Marathon bombing. Although the occasion was marked by very many truly heroic interventions, the residual fact is that an entire community was terrorized. The bombing was a crashingly loud reminder of our vulnerability, largely because of its symbolism. This was, after all, the Boston Marathon — in these parts, a semi-sacred event. Hence the bombing had the feel of a desecration.

The other, in an entirely different venue, is the performance of the United States Congress, especially of the House of Representatives. Not for nothing has this, by general consensus, been declared the least productive House in all America’s history. But the problems with the House go beyond its indolence. It is marked by serial mendacity. It, and its leadership in particular, lack all credibility. It is a wonder that its members walk about — and sometimes even strut about — in clothing other than sackcloth and ashes.

Indeterminate? Here we encounter the leading news story — not yet concluded — of the year, by which I mean Edward Snowden’s revelations. I am among those who regard Snowden as a heroic figure, but I am of course aware that many others (including the United States Government) dismiss him as utterly vile. However he is judged, there can be no doubt that he has fundamentally altered our national conversation, that we now consider the tension between privacy and transparency in new ways. While I expect that in the end, the National Security Agency will remain largely unchanged, a more serious Congress (may that happen speedily in our day) could exercise the difficult judgments that are here called for more vigorously and more responsibly.

I have a second candidate for the indeterminate category. Quite suddenly, the matter of radical economic inequality has taken a leading place on the nation’s agenda. It is, I think, a consequence of the Occupy rebellion, aided and abetted by a growing number of economists. Once again, I am not persuaded that anything much will come of the disquiet, which is marked neither by the anger it rightly deserves nor by the rebellion it warrants. Americans, it turns out, are slow to anger. And the “system” is brilliant at engineering the debate and the plutocrats at preserving their privilege. But now that President Obama has himself spoken critically of the matter, and now that it has become a matter of widespread discourse, there’s some hope — slender, even very slender, that it will be soberly addressed.

Which brings me to the good things, those that go beyond the daily acts of grace and kindness that make life bearable.

Here I think especially of two men. We mourn the death of Nelson Mandela, who might well have left prison embittered, vengeful after 27 years — most of them in a cell without a bed or a toilet, limited to two letters and one visitor a year. But his genuine greatness lay in his ability to keep his eye on the prize, to grab hold of history and turn it in a direction of his own choosing — and a noble direction it was.

The other man is, of course, the remarkable Pope Francis, who has set a new standard for kindness. His readiness to kiss the face of a horribly disfigured man was only the start of it. Now, it is credibly rumored, he leaves the Vatican during the night, dressed as a priest, to bring charity to the poor and the homeless. In a document of exhortation at the end of November, he wrote, “Just as the commandment ‘Thou shalt not kill’ sets a clear limit in order to safeguard the value of human life, today we also have to say “thou shalt not” to an economy of exclusion and inequality. Such an economy kills. How can it be that it is not a news item when an elderly homeless person dies of exposure, but it is news when the stock market loses two points? This is a case of exclusion. Can we continue to stand by when food is thrown away while people are starving? This is a case of inequality. Today everything comes under the laws of competition and the survival of the fittest, where the powerful feed upon the powerless. As a consequence, masses of people find themselves excluded and marginalized: without work, without possibilities, without any means of escape.”

Such men buttress our faith, enliven our hopes.