A Blanket of Snow Changes Jerusalem — Even Just for Shabbat 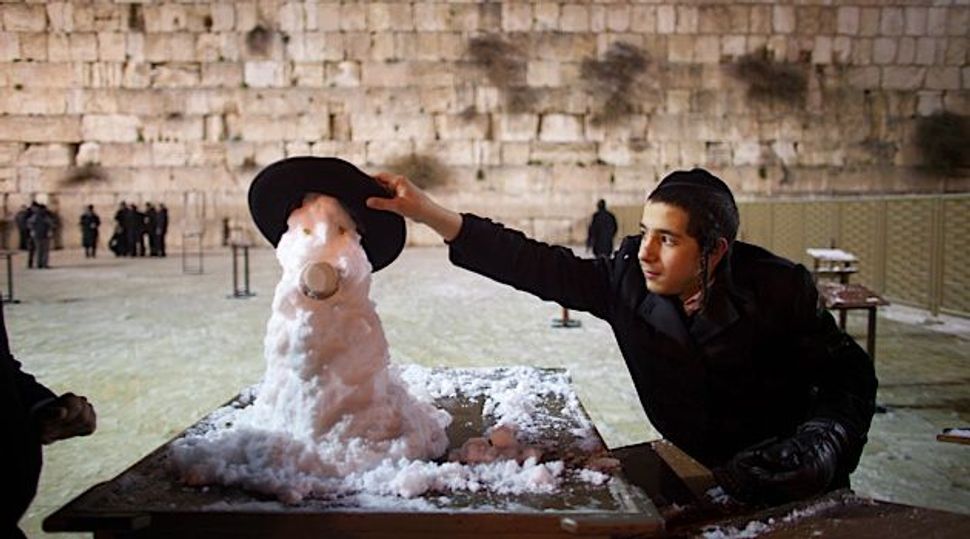 They say that the sun shines on the righteous. Maybe not, but you did have a better chance of weathering this weekend’s Middle East storm if you’re Haredi.

At the height of the Alexa storm, which brought unusually cold temperatures and severe snow, some 60,000 Israel households were without power. However in some neighborhoods, lights were shining brightly in Haredi homes while others were in the dark.

A strain within Israel’s Orthodox doesn’t use electricity from the country’s national grid on the Sabbath out of concern that it is the produce of Jews laboring on the day of rest (a concern that isn’t relevant to Jews in the Diaspora where the majority population is non-Jewish). And so, these households are hooked up to either private “Sabbath generators,” or in most cases, a generator that serves a few dozen homes in their neighborhood.

Just before the candles are lit for the Sabbath, householders flick a switch to move from weekday electricity from the grid to locally produced Sabbath-electricity. Of course, when the grid went down, they were just able to switch to their local supply.

In general, the past weekend was one of both stunning beauty and notable hardships in Israel. The Old City of Jerusalem looked magnificent with its blanket of white, and it seemed that the usually divided population for once took joy in the same things, building snowmen and playing with snowballs. The weather brought out the best in many people, as it did in New York a year ago. Strangers took in people who were unable, or unprepared because they don’t travel on Shabbat, to get home over the weekend. The community spirit was even such that Jerusalem, a woman was able to wear a tallit by the Western Wall without generating controversy. She was a snow woman.

A Blanket of Snow Changes Jerusalem — Even Just for Shabbat