Is the Israel of Today Becoming 1980s South Africa? 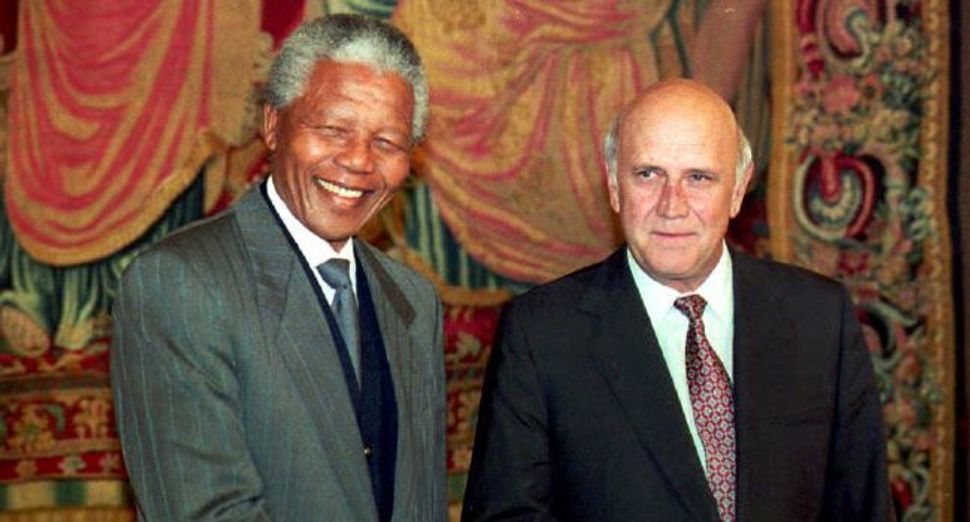 Former Enemies: Nelson Mandela and then South African President Frederik de Klerk shake hands at the Grand Hotel in Oslo on the evening before receiving jointly the Nobel Peace prize in 1993. Image by Getty Images

Today’s college students were not yet born when Nelson Mandela, F.W. De Klerk, Yasser Arafat, and Yitzhak Rabin shared Time’s “Man of the Year” award in 1990. As the world mourns Mandela and celebrates his legacy, it is worth looking back at that moment — and looking toward the future that it might signify.

There was a brief time, from 1989 until Rabin’s assassination in 1995, at which there was real hope in Israel, as in South Africa. In both places, historic enemies had come together in a way that few had thought imaginable. No, the situations were not identical — South Africa was a colonial power, Israel was only called one by its enemies; South Africa’s black majority was within its boundaries, Israel’s Arab plurality was mostly in “occupied territory.” But they were close enough to give Time, and the rest of us, the sense that a New World Order was arising, now that the Cold War was over.

Those were heady years, impossible to convey to young people — right-wing and left-wing — who know Israel only as a quasi-pariah state. I grew up with Mandela a prisoner, and Arafat a wanted terrorist. Suddenly, Mandela’s former oppressors were negotiating how to share power with him, and Arafat shook hands with the Israeli prime minister. Apart from racists and separatists in South Africa, religious zealots in Israel, and the “Israel Lobby” in the United States, the world cheered. Dominos fell: peace with Jordan, Palestinian autonomous zones, the end of apartheid.

But then the paths diverged.

In Israel and South Africa, the far right and far left threatened the processes of peace. Yet in South Africa, Mandela moderated his former stances — embracing the Americans who had tried to keep him in prison, alienating the separatist nationalists in Inkatha, and steering toward socialist capitalism, rather than communism. Most importantly, he chose negotiation over violence, and gave in on critical points, such as allowing South Africa’s National Party to retain significant influence in the government.

Israel and Palestine were not so lucky. Arafat was a weaker leader than Mandela, and while he publicly renounced violence, he privately allowed it to persist, and even encouraged it with double-meaning speeches and anti-Israel rhetoric in textbooks and state media. Emboldened by a leader too weak to take them on, Palestinian extremists flourished.

And Israel’s extremists, of course, assassinated Yitzhak Rabin, egged on by massive rallies at which he was hung in effigy and denounced as a traitor. And yes, Benjamin Netanyahu sometimes spoke at those rallies. So did many of the people now in his government.

By 1996, Israel and South Africa were on radically different courses. Mandela was president of a united South Africa, Netanyahu prime minister of a divided Israel. As far as Israel and Palestine are concerned, the situation today is not so different. Yet South Africa has grown, despite enormous challenges and persistent social inequality, into a free and democratic state.

There are many reasons for the divergence, not only the personal capacities of its leaders. Israel’s right-wing apologists are at pains to point out that “Israel is not South Africa,” and for now, they are right. Israel is not a colonialist outpost. Israel is not ruling over an indigenous majority. Within Israel proper, non-Jews have the same rights as Jews. And so, while much of the world has turned against Israel in the last few years, the United States has stood by it, and the pressure on Israel is nothing like that on South Africa in the 1980s.

If you noticed, all of the ways in which Israel of the 2010s is not South Africa of the 1980s are extremely short-lived. Israel may not be a colonialist outpost, but its West Bank settlements are. Within a decade, Israel will indeed be ruling over an indigenous majority. And they will have either no rights (if they live in the West Bank) or increasingly abridged right (if they live within Green Line Israel).

The Divest-from-South-Africa movement predated my arrival at Columbia University by a few years, but it was still very much a force on campus when I arrived in 1989. Indeed, it had won. Not only Columbia and other universities, but many countries and even many in the U.S. government supported boycotting, divesting from, and imposing sanctions upon South Africa. Although many in the Reagan and Bush administrations disagreed — including Dick Cheney, who called Mandela a terrorist (sound familiar?) — no one I knew on campus did. South Africa was racist. Who would defend that?

No amount of Israel advocacy can change mathematics. Unless Israel changes its policies, it will soon be quite similar to South Africa in the 1980s, and it’s hard to see why it won’t follow white South Africa’s road to extinction. True, Israel has much better lobbyists, but South Africa had its supporters too, especially within the Republican party (sound familiar?) and with its mineral wealth, it had plenty of money to spend. It also had wonderful tourist attractions, an entrepreneurial spirit, and a thriving cultural scene. Nothing helped. You can’t whitewash apartheid. Eventually, unless you’re too big to oppose, like China or Russia, the world does turn against you.

There is one open question, though, to which no one can yet know the answer. If Israel/Palestine 2025 is South Africa 1985, who will be Palestine’s Mandela?

Is the Israel of Today Becoming 1980s South Africa?