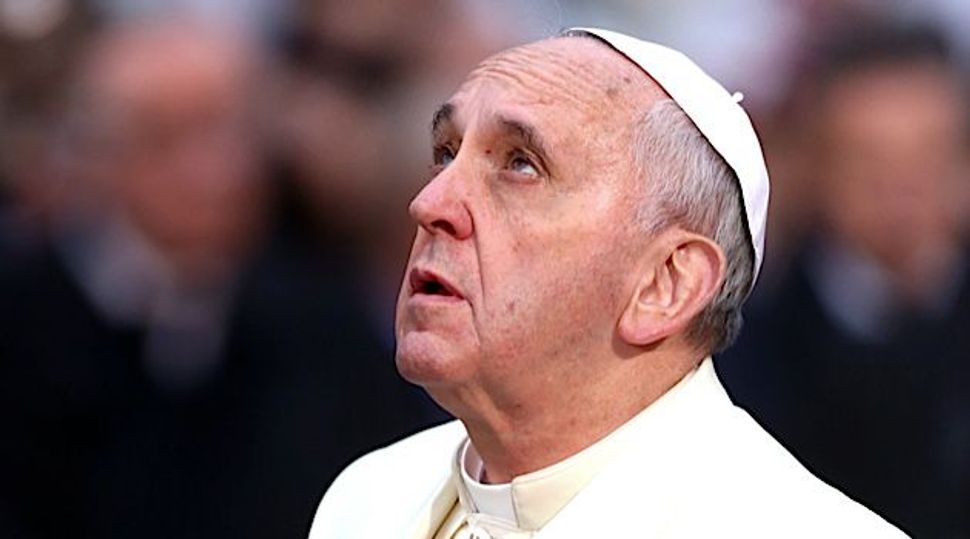 Changing Church: ?The Catholic Church seems to be doubling down on its most conservative teachings. You know something?s changing when Rush Limbaugh calls the pope a Communist,? writes Jay Michaelson. Image by getty images

Maybe the Christian Right is right. For almost 40 years now, they’ve been warning us that we’ve entered the wilderness, that traditional religion is being eroded. Did 2013 prove them right?

Item One: the Rise of the Nones. This phenomenon — nearly 20% of Americans listing “none” as their religious affiliation — was first documented in 2012, but only in 2013 did it emerge as a demographic and political fact, impacting how we vote, how we live and what we think about political issues. Strikingly, there are more and more Nones the younger the demographic sample gets. Among 18- to 29-year-olds, 32% are Nones.

Item Two, or perhaps One-A, is the Pew Research Center’s survey of American Jews, which showed that 20% of American Jews (there’s that number again) consider themselves “Jews of no religion,” and that their non-religious Judaism is not a deep or sticky enough of an identity to be sustainable.

Mega-churches are spreading — it’ll be interesting to see whether charismatic forms of Judaism will mimic their success — and old-line churches are dwindling. It seems that the center cannot hold.

And then there’s the Pope. Under Benedict XVI, who resigned amid swirling rumors of sexual and financial scandals in the Vatican, the Catholic Church seemed to be entering a second Counter-Reformation, doubling down on its most conservative teachings and, by way of enormous “charitable” organizations, working to eviscerate legal protections for women and sexual minorities.

Now, Pope Francis tells us he won’t judge gay people, that the church is too obsessed with sexuality and that untrammeled capitalism is immoral.

You know something’s changing when Rush Limbaugh calls the pope a Communist.

Finally, even among those who still profess religious belief, the LGBT equality movement has caused a striking moderation in views. Staying with the Catholic Church for a moment, over 60% of church-going Catholics in America support same-sex marriage (compared to over 80% of Jews), which is above the national average. Even younger Evangelicals, galvanized around the Emerging Church movement, are beginning to say “live and let live” when it comes to gays, although they remain as staunchly anti-abortion as ever. Taboos are falling.

And at the same time, the influence of the so-called Christian Right is at a low point. Think about it: A few years ago, when we talked about conservative Republicans, we talked about the Christian Coalition and the Family Research Council. Now, we talk about the Tea Party. Yes, many Tea Partiers are just warmed-over Christian Rightists. But the rhetoric is different, the issues are different and the churchmen aren’t calling the shots.

Clearly, no one factor explains all of these disparate trends. We still don’t know why Americans are becoming more like Europeans when it comes to matters of (un-)belief: secular culture, science, the excesses of “bad religion,” interfaith marriages and so on. It may just be a matter of survey respondents feeling more comfortable saying “None.”

Nor do we really know what the future holds, for Jews or anyone else. We can speculate that the growth in secularism and the concomitant growth in fundamentalism are related — but which is the horse and which is the cart?

It does seem, though, that 2013 was a year in which traditional religious affiliation underwent significant change. Is this the dawning of a new, liberal age, in which America finally starts to look a little more like the rest of the Western world?

Don’t count on it. American religion is nothing if not resilient. It is malleable enough to change with the times, and if anyone ever does declare war on Christmas, they will lose. We remain a weirdly religious country.

There are signs of innovation and renewal, too — forms of religion which focus on the pastoral and the personal, rather than the dogmatic. And these values are timeless. No matter how shopworn and threadbare our religious language sometimes becomes, the mystery and tragedy of human experience still remains — and so religion endures. Remember, even that famous sermon about losing one’s religion begins, “Oh, life, it’s bigger — it’s bigger than you…”