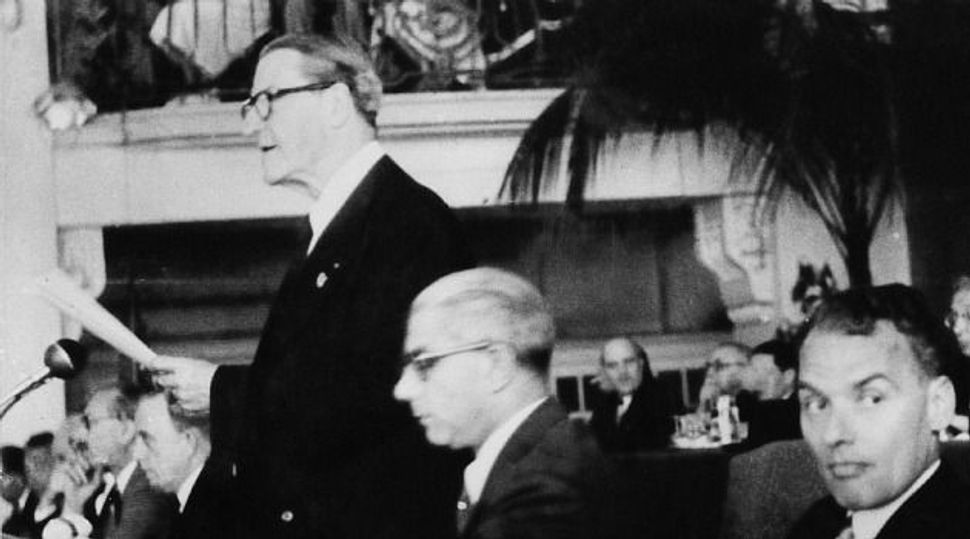 Well, another year is almost finished, and good riddance. Before we say goodbye to 2013, though, we should take a moment to note one of its overlooked milestones. This was the 30th anniversary of “Indicting American Jews,” the probing, angry, magisterial essay by the late Holocaust historian Lucy Dawidowicz, published in Commentary in June 1983.

Dawidowicz, a leading intellectual of the neoconservative school, was best known for her groundbreaking 1975 volume, “The War Against the Jews: 1933-1945,” which definitively established Nazi Germany’s utter commitment to exterminating European Jewry. Killing Jews wasn’t a secondary or incidental objective, she showed, but a central Nazi war aim.

“Indicting American Jews” addressed the increasingly fashionable notion that American Jews abandoned European Jews to their fate. Dawidowicz dissected two efforts then current that branded American Jews as complicit. One was a self-styled investigative panel, the American Jewish Commission on the Holocaust, chaired by former Supreme Court justice Arthur J. Goldberg. The other was a 1982 documentary titled “Who Shall Live and Who Shall Die?”

Both efforts aimed to show that the wartime Jewish leadership under Rabbi Stephen Wise was slavishly devoted to President Franklin Roosevelt and unwilling to challenge his supposed indifference to Jewish suffering. Dawidowicz mercilessly demolished them both. The commission, she wrote, began by disclosing its verdict, never called witnesses, subcontracted its research to a lifelong Wise-basher and ended up rejecting its own report. As for the film, it was depicted as a shrill parade of half-truths.

In fact, the author wrote, the Jewish organizations made real efforts to prod Roosevelt. The problem was that their efforts were doomed to failure.

She gave several reasons why they couldn’t succeed. Most important was Hitler’s maniacal determination to kill Jews. Second was Roosevelt’s genuine fear that the right-wing, isolationist Congress would accuse him of waging a “Jewish war” and turn against it. Then, too, the entire world was at war. Tens of millions were dying. Ten million Americans were in uniform. And Jews were not powerful then. It was hard to plead for special attention from an America that didn’t much like Jews to begin with.

But Dawidowicz wasn’t interested merely in deflecting the indictment of the Jewish leadership. She had an indictment of her own. The myth of inaction wasn’t just misguided — it was part of a deliberate smear campaign, “the exploitation of the Holocaust by some with old political scores to settle within the Jewish community.”

The “some” were Hillel Kook, an Israeli better known by his pseudonym Peter Bergson, and his ally Samuel Merlin. They were disciples of rightist firebrand Vladimir Jabotinsky, whose Revisionist movement had split from mainstream Zionism in the name of “unity.” Mainstream Zionism was a coalition of parties, led by David Ben-Gurion. Jabotinsky favored one unified party, led by him.

Kook and Merlin came to America in 1940 to join Jabotinsky, who was meeting with followers. But in August Jabotinsky died suddenly, leaving his young acolytes stranded. Unable to return to Europe or Palestine, they set about continuing his work by undermining and discrediting Ben-Gurion’s liberal ally, Rabbi Wise. In 1982 they were still at it. Merlin played a central role in Goldberg’s commission. Both, appeared as star interviewees in the “Who Shall Live” film.

Dawidowicz touches only briefly on the Bergson Group’s well-known wartime exploits. She recalls their courting influential people in Washington and Hollywood, forming and dissolving successive front-groups with grand names like the Committee for a Jewish Army and the Emergency Committee to Save the Jewish People of Europe. They made a lot of noise. They probably helped turn public opinion and goad the administration to action. But they also created a libelous myth that lived on past the war. And they vastly inflated their own role.

She describes Bergson-Kook’s film appearance, telling “how he first learned about the mass murder of the Jews.” He read about it in the Washington Post in November 1942, when the State Department verified Hitler’s secret plan for a Final Solution.

But while Hitler’s Final Solution had been secret, his mass killing wasn’t. It was all over the Jewish press. “Even the New York Times” covered it, Dawidowicz wrote. Others have written of Wise’s mass rally at Madison Square Garden in July 1942, where he read a message from Roosevelt saluting “the determination of the Jewish people” and vowing to hold the Nazis “to strict accountability in a day of reckoning which will surely come.” How did Bergson not hear about it until November? “Where was he?”

Bergson’s admirers make much of his own Madison Square Garden rally the following March, drawing 20,000 people to see a pageant, “We Will Never Die,” featuring Stella Adler and a young Marlon Brando. Few remember that Wise had held another rally a week earlier in the same arena, attended by 70,000. British government memos credited Wise’s rally with forcing the Allies to hold a conference on Jewish refugees in Bermuda in April.

After Bermuda, Roosevelt’s close friend and treasury secretary (and future United Jewish Appeal chairman) Henry Morgenthau Jr. ordered funds transferred to Europe for Jewish relief. The State Department blocked the transfers for months. When Morgenthau’s staff discovered the obstruction, they leaked it to the House foreign affairs committee, whose Jewish chairman Sol Bloom convened stormy hearings in November. That led directly to Roosevelt’s creation in January of the War Refugee Board, tasked with saving Jewish lives. Bergson claimed it was his doing.

To be sure, Bergson wasn’t solely responsible for the enduring myths of Jewish inaction and Roosevelt’s guilt. Bergson created them, but later historians — Arthur Morse’s 1968 best-seller “While Six Million Died,” David Wyman’s “The Abandonment of the Jews” in 1984 — made them gospel. Neither scholar was a Jabotinskyite. They were merely optimistic Americans animated by the belief that every problem must have a solution.

Thanks partly to them, Bergsonism lives on. The inaction myth dominates American Jewish public discourse. The default assumption is that Roosevelt, who had more Jewish advisers than all previous presidents combined, was an anti-Semite, and his Republican opponents, who led the fight to keep America’s gates closed, were the Jews’ friends. A new generation of neo-Jabotinskyites, encouraged by successive right-wing Israeli governments, has emerged as permanent critics of their fellow Jews and their organizations. And presidents — especially Democratic ones and most especially the current one — are attacked with ever-growing frequency and intensity, continually accused of selling out the Jews. It’s always 1943.

It’s not healthy. It strains relations with the White House. It alienates young Jews from the community. And, like the Bergson attacks of yesteryear, it’s a lie.

So before we let 2013 go, let’s pause a moment to remember Lucy Dawidowicz and raise a glass of bubbly to her common sense.