A Mideast Peace ‘Bridge’ Too Far? 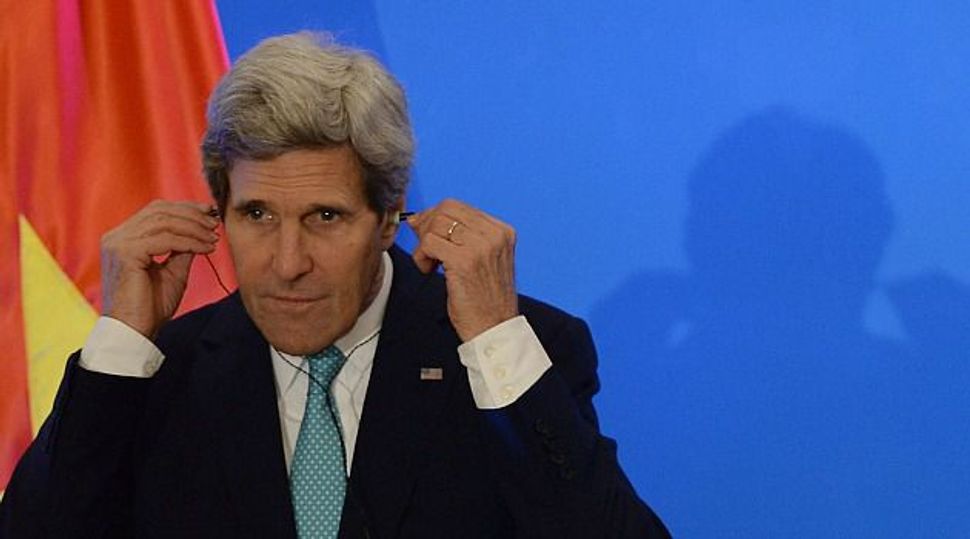 Bridge to Nowhere? With Mideast peace talks foundering, John Kerry may soon present U.S. ?bridging proposals? to move the process forward. An informed scorecard says it might not do much good. Image by getty images

A few weeks ago, President Barack Obama revealed that the current objective of American-led Israeli-Palestinian talks about a two-state solution is a “framework agreement.” This document, he explained, would not “address every single detail, but gets us to a point where everybody recognizes [that it is] better to move forward than [to] move backwards.”

Secretary of State John Kerry, speaking at the same Saban Forum, in Washington, noted that a framework agreement “will have to address all the core issues” and be able to lead to a “full-on peace treaty.”

Judging by the West Bank security plan presented recently to the two sides by Kerry and John Allen, a retired Marine Corps general, Washington might come forward with bridging proposals as it becomes clear that the framework agreement essentially defines the gaps between the two sides’ positions on each key issue. According to some reports, it will do so in late January, regardless of the status of the framework agreement.

There is no assurance, and probably little likelihood, that the current negotiations will get anywhere substantial. But suppose they do. Suppose Israeli settlement activitiy doesn’t cause negotiations to collapse, and that Benjamin Netanyahu’s government and the Palestine Liberation Organization, led by Mahmoud Abbas, cooperate in the “framework agreement” venture.

Based on long years of monitoring the Israeli, Palestinian and American positions on all the final-status issues, we can speculate as to what the gaps in a framework agreement might conceivably look like, what the resultant American bridging proposals might contain and how the parties might react.

Security: Israel wants a virtually open-ended presence of the Israel Defense Forces in the Jordan Valley, at West Bank-Jordan border crossings and at early warning stations in the West Bank. The PLO would accept an international security presence but no Israelis. Here the United States has already submitted a bridging proposal for a territorially limited Israeli presence whose duration beyond 10 years would depend on Palestinian compliance with security demands. The PLO has rejected it, and Israel wants modifications.

Prediction: A compromise can be found.

Borders and settlements: The PLO agrees to more or less 2% land swaps across the 1967 line. Israel wants 6%–8%, with special provisions for the status of outlying settlements. The United States will weigh in with a 4%–5% map and phased withdrawal of all settlements beyond the new line, unless settlers choose to live under Palestinian law.

Gaza: Both sides concur that the agreement applies to Gaza only after the strip has been reintegrated politically into the nascent Palestinian state.

Jerusalem: Israel agrees to a symbolic Palestinian capital on the city’s outskirts with most of Arab East Jerusalem remaining Israeli. The PLO wants to partition the city roughly along ethnic lines, including control over most of the Old City. The United States proposes a Palestinian capital in most of East Jerusalem, a special administration for the Old City and a joint municipality.

Holy places: Israel wants a stake in the Temple Mount and the Jerusalem Holy Basin that reflects its historical and religious roots. The PLO does not recognize these roots, and it demands exclusive control over the Mount. The United States suggests an international regime with Israeli and Palestinian participation.

Refugees/right of return: The PLO wants Israel to absorb at least 100,000 1948 refugees and recognize the principle of return for all. Israel agrees to an expression of empathy for Palestinian suffering since 1948, on condition that Israel is recognized as a Jewish state. The United States backs the Jewish state demand and calls on Israel to accept a symbolic return defined as “family reunification” but not the principle of a wider right of.

Water: The two sides agree that over a 10-year period, large quantities of desalinated water, generated with Israeli technology and financed by the international community, will become permanently available to the Palestinian state.

To sum it up, this exercise — and it is merely and emphatically a speculative exercise — produces a few areas of agreement and several of disagreement. Are trade-offs possible here between, say, Palestinian agreement on the refugee issue and Israeli agreement on a Palestinian capital in Jerusalem? If the negotiations get this far, a determined optimist like Kerry will press to continue in precisely that spirit. (Even more imaginative trade-offs could involve Israeli concessions to the PLO balanced by security aid from the United States, largesse from the European Union, open relations with Saudi Arabia and even Iran-related issues).

But hard-liners on both sides will insist that this round, like all its predecessors, has failed. Where will Abbas and Netanyahu be? With the hard-liners, meaning, to a large extent, adhering to their political coalitions and supporters? Or will they suddenly display the kind of extraordinary leadership that has always been needed for Israelis and Arabs to make peace?

Yossi Alpher is A former director of the Jaffee Center for Strategic Studies at Tel Aviv University and a former co-editor of bitterlemons.net. He was a special adviser to Prime Minster Ehud Barak during the July 2000 Camp David talks.

A Mideast Peace ‘Bridge’ Too Far?