As One Jewish Retail Empire Falls, Another Rises 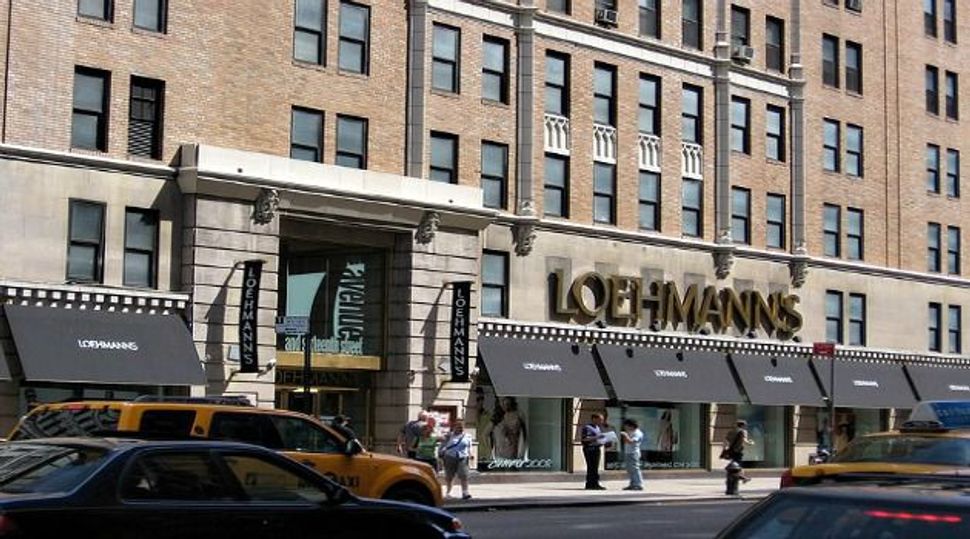 Two retail empires with Jewish roots collided in New York this week — one on its deathbed, the other ready to take its place.

Loehmann’s, the fashion discounter founded in 1921 by an enterprising department-store buyer named Frieda Loehmann, announced this week it will shut down its remaining 39 stores after its third bankruptcy filing.

And Barneys New York, the luxury retailer launched in 1923 by an ambitious tailor named Barney Pressman, unveiled plans to take over Loehmann’s space in Manhattan’s Chelsea neighborhood — the same storefront where Barneys began in the first place.

Loehmann’s demise puts an ignominious end to an illustrious history. From a single store in Brooklyn without frills or even dressing rooms, the pioneering chain grew to 100 stores before debt — and competition — accelerated its decline.

Frieda Loehmann herself became a legendary character. “Dressed from head to toe in black and carrying her cash in her bloomers, she rode freight elevators to the designer showrooms of the garment district, where she bought up samples, canceled shipments and other leftover garments, which she then sold at a discount,” The New York Times wrote in a 1988 history of the store.

More than that, though, she and Loehmann’s came to represent a kind of Jewish resistance to paying retail — and a culturally entrenched quest to beat the system by not shelling out what goyim might pay for the same items. I will admit here for the first time that I prowled the Manhattan Loehmann’s several times weekly for deals on labels like Rag and Bone, Prada, and Theory. The thrill of saving, along with the actual clothes, made it addictive.

Lilit Marcus, former EIC of The Gloss, did the same thing. “As a Jewish girl too broke to go full-on JAP, one of my first orders of business upon moving to the Big Apple was spending an afternoon wrestling grandmas for 70-percent-off coats at the store’s Brooklyn outpost,” she wrote in a 2010 paean to the chain. “Really, you haven’t lived until somebody’s bubbe has punched you in the face because you ripped a Chanel suit out of her hands.”

The fortunes of Barneys have swung in the opposite direction. The brand, which posted record sales in 2013, is returning to 57,000 square feet in the birthplace it abandoned 17 years ago. Part of the structure is now occupied by The Rubin Museum of Art, which focuses on Asian-themed collections and exhibitions.

According to Joshua Levine’s book, The Rise and Fall of the House of Barneys, Barneys New York first moved into Chelsea in 1923, when Barney Pressman pawned his wife’s engagement ring for $500 and opened a store specializing in discounted men’s suits. By the time he retired in 1975, it had expanded to several floors and generated $35 million a year. Fred Pressman, Barney’s son, took over until the 1980s; his own sons, Gene and Lance, expanded Barneys nationwide, but also ended up in bankruptcy.

A hedge fund now owns a majority stake in Barneys, which operates 18 stores across the country.

As One Jewish Retail Empire Falls, Another Rises