Israel Must Work With Bedouin To Develop Negev for All 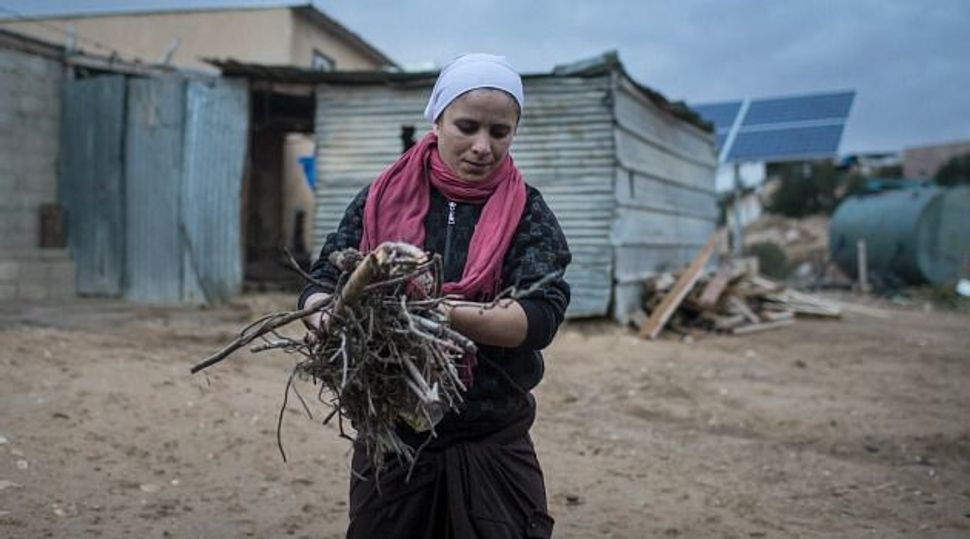 Ancient Peoples: Bedouin woman gathers firewood at a settlement in the Negev desert. Why doesn?t Israel work with the ancient people, instead of fomenting conflict, Theo Bikel asks. Image by getty images

(JTA) — This past May, I made a YouTube video with the Israeli NGO Rabbis for Human Rights that drew a parallel between my role as Tevye in “Fiddler on the Roof,” in which the Jews in Sholem Aleichem’s tale faced expulsion from the Russian shtetl of Anatevka, and a Knesset proposal to forcibly displace up to 40,000 Bedouin-Arab citizens. The video included anguishing footage of the July 2010 demolition of the unrecognized Bedouin village of El-Araqib.

The proposal, known as the Prawer-Begin plan, has reportedly been withdrawn, but this is not certain. A Knesset committee debated the bill even after the supposed withdrawal. There are also indications within the governing coalition that force may yet be used to expel thousands from their desert homes with a law shaped to be more punitive than Prawer-Begin.

The Bedouin have been living in the territory of the Negev Desert for many generations. After Israel’s War of Independence, during which some Bedouin actually fought for the emerging state, much of the population was uprooted and concentrated in a siyag, or enclosure, in a barren part of the Negev’s northeast.

Subsequently, the government maintained a policy of ambiguity. Villages that became home to roughly half of Israel’s Bedouin were not officially recognized and were denied state services, such as utilities and roads. But the government largely left these villages alone. During the 1970s, the government allowed the villagers to file legal claims for their land. These were contested over many years, with two-thirds eventually denied.

Six years ago, the government organized a commission headed by a retired Supreme Court judge and a former state comptroller, Eliezer Goldberg, to prepare recommendations regarding Bedouin property rights and unregistered villages. In 2008, the commission proposed that the homes and villages be legalized, pursuant to a regional plan, and land claims resolved. The implementation of these recommendations, however, was outside its purview.

The following year, the government organized a committee headed by the former deputy chair of the National Security Council, Ehud Prawer, to draft an implementation program. The committee included no Bedouin and prepared its work without consulting the affected communities. The resulting plan called for expropriation of at least half the claimed land, at minimal cash compensation, and the forced relocation and destruction of at least 25 villages where 35,000 to 40,000 people reside. Even this proposal was too generous for one committee member, who called for the expropriation of all claimed land.

Benny Begin, recently retired from the Knesset and a former cabinet minister, was tasked with further shaping the Prawer Plan into legislation. He supplemented it with programs for urban development to address the historical neglect of Bedouin residing in seven poverty-stricken and crime-ridden urban townships. But with the details of relocation left vague and uncertain, most Bedouin in the 35 unrecognized villages understandably viewed Prawer-Begin as a scheme that threatened them with dispossession and forced urbanization. Those previously pushed into towns generally found inadequate employment opportunities and poor social conditions. Understandably, most Bedouin distrusted this kind of deal. In addition, some Bedouin prefer agrarian lifestyles for cultural reasons and were deeply disturbed by the prospect of being forced out of their homes and lands.

Jewish groups both inside and outside Israel also spoke out against the proposal. In the Knesset, a mix of left- and right-wing legislators opposed the government bill. Those on the left objected to the prospect of forced relocation, while the right opposed Begin’s proposed package of inducements and compensation for the Bedouin.

Israel and its Bedouin citizens are at a crossroads. They could return to a hostile policy that destroys homes and fields and condemns thousands of Bedouin to displacement from their unrecognized villages and neglect in the townships. Or the government could implement provisions of the Goldberg Commission, resolving land claims and legalizing villages as part of a regional plan developed in consultation with the affected population. Bimkom, an Israeli planning group, has suggested an alternative master plan, to guide the integration of these villages into a broader regional framework.

Working in this way, Israel can move forward to restore trust between the state and its Bedouin citizens, and to establish a constructive program of developing the Negev for all.

Theodore Bikel is an internationally acclaimed singer and actor who serves as board chair of Partners for Progressive Israel.

Israel Must Work With Bedouin To Develop Negev for All