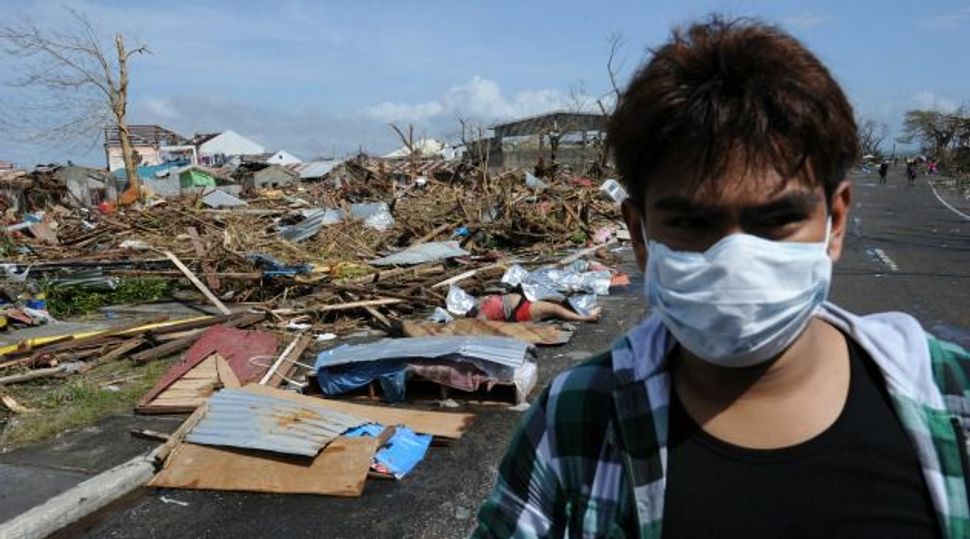 Need To See More? Man rides past dead bodies littered along a road on the eastern island of Leyte after Super Typhoon Haiyan swept over the Philippines. How many disasters will it take to rouse Americans to the dangers of climate change? Image by getty images

The Forward asked a number of writers to offer their hopes and predictions for the new year. What ideas and trends will shape our world in 2014?

Human sources will spew billions more tons of carbon dioxide and other heat-retaining gases into the atmosphere. The industrial fervor that raised standards of living in many parts of the globe over the last two centuries will—at a redoubled pace and more so—generate icecap melts, droughts, floods, storms, and other extremities that threaten life next year and will continue to do so for millennia to come.

Government agencies everywhere will fail to act sufficiently to bend the greenhouse gas curve back toward a sustainable level.

Media will feel pressure to “balance” reports of scientific consensus with crackpot denials, though less so than in previous years.

With normal politics stalled almost everywhere, and mainline institutions in default, the initiative will be taken by activists. There will be more direct action (as against the tar sands pipelines in both the US and Canada). And the campaign to get university, city, pension fund and other investment funds to divest from fossil fuel corporations will accelerate. Already at work on some 400 campuses in the US, this movement will make the case, with increasing force, that stamping approval on oil, coal, and natural gas companies is not only morally destructive but financially foolish.

To go out on a limb, there’s a fighting chance that this campaign will force fossil-fuel divestment at one (at least) major institution of higher learning. One way or the other, the cascade will proceed.

Todd Gitlin chairs the doctoral program in communications at Columbia University and is the author most recently of “Occupy Nation: The Roots, the Spirit, and the Promise of Occupy Wall Street” (HarperCollins, 2013).