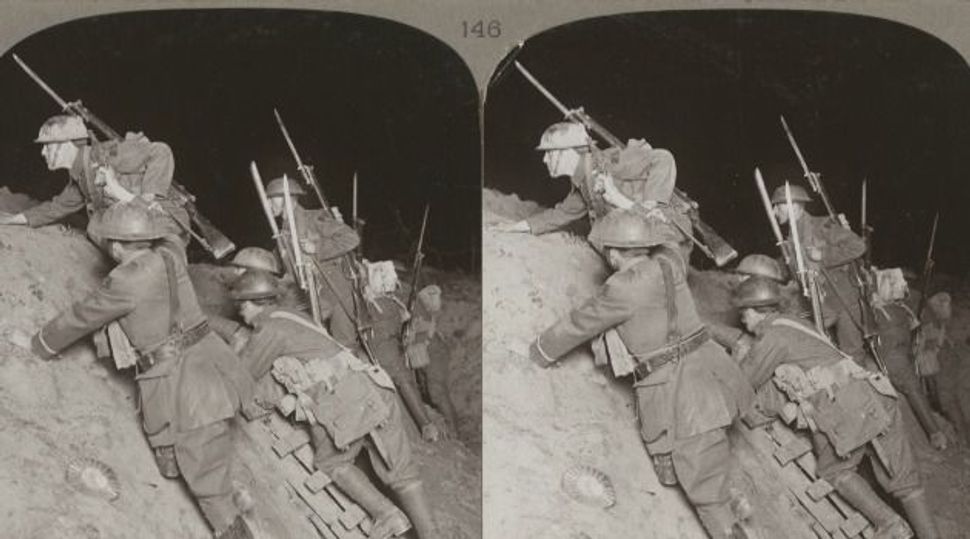 Man?s Inhumanity: With the 100th anniversary of World War I?s trench warfare, we mark the beginning of humanity?s descent into brutality, on a global scale. Image by getty images

Every now and then, though, we encounter a milestone that truly stands on its own as a moment in history. We’ve got one coming up this year, on July 28: the 100th anniversary of the outbreak of World War I. On that day in 1914 the world began anew. One epoch in history ended and another one commenced. It’s fair to say that in 2014 we mark the end of the first century of the modern era.

Make no mistake: World War I changed everything. It erased great empires that had defined the map of human civilization for a millennium — Austro-Hungarian, Ottoman, German, Russian and the last vestiges of imperial China. In their place came the modern system of nation-states, established according to the newly universal principle of national self-determination.

Poles, Hungarians and Irish emerged from the shadows onto the world stage. Revolutionary nationalist movements erupted in Mexico, Vietnam and the Arab world. Iraq and Syria were added to the map. Britain issued the Balfour Declaration, recognizing Jewish national rights in Palestine, and then conquered Palestine two weeks later, setting in motion the formal Jewish march to statehood.

World War I was the first time in human history that an entire generation of young men was willingly lined up, wrapped in uniforms and marched off to be slaughtered. It introduced the world to wondrous new technologies of mass death, from machine guns and tanks to poison gas. It took at least 15 million lives, the fifth-deadliest mass killing in history. (No. 1 was the Second World War; 2, 3 and 4 were Chinese dynastic conflicts.) Counting epidemics and revolutions that were its direct results, the full toll of World War I was perhaps 65 million, nearly 4% of the world’s population.

It brought universal suffrage to Britain and America, along with Prohibition, anti-Semitic immigration quotas, the first Red Scare and the birth of the American Civil Liberties Union. It ushered in the age of dictators in Europe, spawning communism in Russia and fascism in Italy and Germany. It set in motion the events — the seething German resentment, the widespread social ferment and political instability, the war-weariness of the British and French elites — that led within two decades to World War II, the deadliest, most devastating conflict in all human history.

Looking back from the distance of a century, the reasons for that first world war seem incomprehensible. We moderns like to think that war should be fought, if at all, only when basic values are at stake — defending democracy, resisting tyranny, protecting small nations. World War I took place in our own 20th century, yet it was about none of those things. The first total war of the modern age was nothing more than a grudge match among decrepit, incestuously intermarried royal houses, idly playing poker with millions of young lives for chips.

But there’s more modernity there than you might think. As Adam Gopnik wrote recently in The New Yorker, the “rhetoric of 1914” had a startlingly contemporary sound. It featured a “relentless emphasis on shame and face, on position and credibility, on the dread of being perceived as weak,” the fear of “being reduced to a second-rate power.” Straight out of today’s headlines.

World War I happened because nations began attacking one another willy-nilly, essentially in response to the sight of other nations attacking one another willy-nilly. Austria attacked Serbia because its grand duke had been assassinated, and Vienna required justice. Russia declared war on Austria to defend its ally Serbia. Then Germany, Austria’s ally, launched a preemptive attack on France, Russia’s ally, which was making threatening noises. England came to France’s aid. Turkey, Germany’s ally, attacked Russia and lunged for Suez, hoping to cut off England’s link to India. Now England and France attacked Turkey. Japan got in the act. In every capital there was a war party trumpeting honor and duty and blood and soil. Nobody wanted to be left out of the great game. If it sounds idiotic, that’s because it was. And a generation was slaughtered because of it.

Now it’s a century later, and the rhetoric and diplomatic parlor-games are depressingly similar. Do we stand by our allies? Do we attack preemptively when we are threatened, or cower and wait? Do we face down our enemies at gunpoint to assert our American exceptionalism, or do we beg them to meet us halfway? Is America the world’s sole superpower, or is America the world’s therapist? Have we lost the will to shed a little blood in defense of our honor?

Of course, today’s war party will tell you that the analogy is all wrong — that the current moment isn’t 1914 but 1938. The danger, they never tire of telling us, isn’t that the world is about to stumble blindly into another World War I, but that we’re failing to prepare for the return of World War II.

That logic might hold some water if it weren’t for the fact that while 1938 found Nazi Germany racing unhindered to build the world’s strongest war machine, 2014 finds Iran, the putative Nazi stand-in, laboring under suffocating sanctions that have brought it near economic ruin. While Nazi Germany in 1938 faced a handful of neighbors seeking politely to limit its dismemberment of Czechoslovakia, Iran faces a united world community demanding its disarmament.

There is one important way that 1938 is repeating itself today. Then as now, American isolationists accuse a Jewish lobby of pushing America into a rerun of a pointless overseas war. The difference is that back then there was no Jewish lobby to speak of. Which brings us back to 2014…