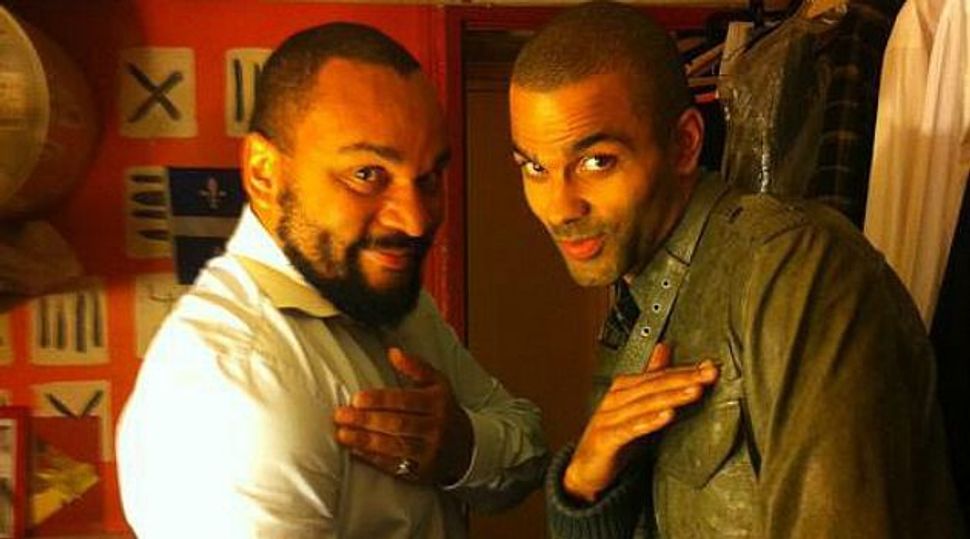 Not Funny: French comic Dieudonne Mbala-Mbala, shown here with basketball star Tony Parker, maintained his cachet with celebrity friends, even as he has spiralled into anti-Semitic alliances with far right hatemongers. Image by twitter

The comedian Dieudonné M’bala M’bala, according to French authorities, is under investigation for inciting racial hatred. They have also urged city officials to consider barring Dieudonné from public performances during his upcoming tour.

Prodding the government to act was the video clip of Dieudonné’s current show in Paris, when he mentions the name of Patrick Cohen, a journalist (and antagonist) who happens to be Jewish. Smiling, Dieudonné sighs: “When I hear Patrick Cohen talk, I say to myself… the gas chambers… what a pity.”

Rarely has the meaning of “mourir de rire” — to die laughing — taken on so dark a hue.

Whether God gave us this comedian, as his name suggests, is a question best left to theologians. But leave it to historians to discuss how France’s past has given this man to us. The comic’s career reflects not just the nature of political discourse in France, but also reveals the practical and ethical puzzles that its political parties face as they attempt to respond to it.

The child of a mixed marriage — his mother is French, while his father is from Cameroon — Dieudonné first won celebrity two decades ago as part of a comedy duo. Partnering with his childhood friend Élie Semoun, the child of a Moroccan-Jewish family, the two men — a large man with a cherubic face side by side with a slight fellow with angular features — lampooned the everyday racism that blacks and Arabs confronted in France. The duo was a smash hit, but their partnership would soon founder. (Semoun no longer recognizes his former friend, living as he does in a “world of hate.”)

From the theater, Dieudonné drifted to the political stage. Determined to oppose a candidate from the racist and anti-Semitic Front National, he ran for office in the city of Dreux in 1997, but received less than 8% of the vote. Clearly, winning applause was one thing, quite another was winning votes.

Yet Dieudonné persisted: in 2002 he ran an even more disastrous legislative campaign in a Paris suburb against the Socialist candidate — none other than Dominique Strauss-Kahn, the man who would have his own tragi-comic turn at a New York hotel a decade later.

At this point, Dieudonné, depending on one’s perspective, either careened off the tracks or with a greater head of steam kept on them. Unable to gain traction on the political left, Dieudonné executed a stunning volte-face and embraced the very political ideology that, just months before, he had vigorously combatted. In 2003, dressed as an Orthodox Jew, Dieudonné strode onto the stage of a popular television show, gave a mock Nazi salute and shouted “IsraHeil!”

Three years later, he joined the Front National’s annual “Bleu, blanc, rouge” celebration — a visit returned by Jean-Marie Le Pen, who as godfather, presided over the baptism of Dieudonné’s fourth child. Sandwiched between these events was a show at the legendary Zénith theater in Paris, where Dieudonné welcomed on stage the equally legendary Holocaust negationist Robert Faurisson. Finally, in 2009, Dieudonné demonstrated that, at least in politics, the third time is not necessarily the charm: he ran on an anti-Zionist ticket with another negationist, Alain Soral, for the European legislative elections, winning less than 2% of the vote.

All the while, Dieudonné has been hauled into court more than half a dozen times; the charges, ranging from defamation to incitation to racial hatred, share the same obsession: the Jew. The people he considers to be “the world’s greatest swindlers” — no need to name names — are also the subject of a popular ditty he penned. Based on the popular song “Chaud cacao” (“Hot Chocolate”), we now can whistle along to “Shoahananas,” or as Dieudonné insists with an innocent grin, “Chaud Ananas” (“Hot Pineapples.)” For those wondering about the pineapple-costumed adults at Dieudonné performances, you now know why they are not France’s answer to our Wisconsin cheese heads.

Of course, a six-foot tropical fruit is already an unusual sight, but even more so is one demonstrating the “quenelle.” As the world recently learned, the quenelle is the odd gesture — an extended right arm slanted towards the floor, the left arm stretched across the chest — for which Dieudonné claims paternity. The salute has blossomed both on-line and on soccer fields: a succession of French athletes from Tony Parker to Nicolas Anelka have performed the quenelle in order to signal their… well, their what?

This is where things get fuzzy.

Dieudonné insists the gesture is simply a French raspberry, aimed at “the system.” Obviously, this claim begs the question of its deeper significance for Dieudonné if the Jews, as he suggests, own and manipulate “the system.” It also ignores the context of the gesture — which many critics insist is an inverted Nazi salute — used by Dieudonné to punctuate his racist jibes and anti-Semitic innuendos. A number of athletes who replicated the gesture, ignorant of its import, seem sincerely angry to have been caught with their shorts down.

The real danger is that Dieudonné is also pulling down the government’s shorts. There is no reason to doubt Dieudonné’s anti-Semitism, just as there is good reason to worry about the ideological bridge he has built to France’s traditional far right. But that bridge carries less traffic than many critics believe. Dieudonné’s sketches have gone viral, to be sure. Yet this no more means anti-Semitism is rampant in France than that Belieberism has infected the United States. Instead, it means that Dieudonné has transformed himself into a cultural phenomenon, attracting the inquisitive as well as the inane. To bar his live performances would be both useless — his real base is the virtual “dieudosphère” — and, far worse, counterproductive. Clowns have shorter runs, in general, than martyrs.