For a Two-State Solution? Boycott Ariel 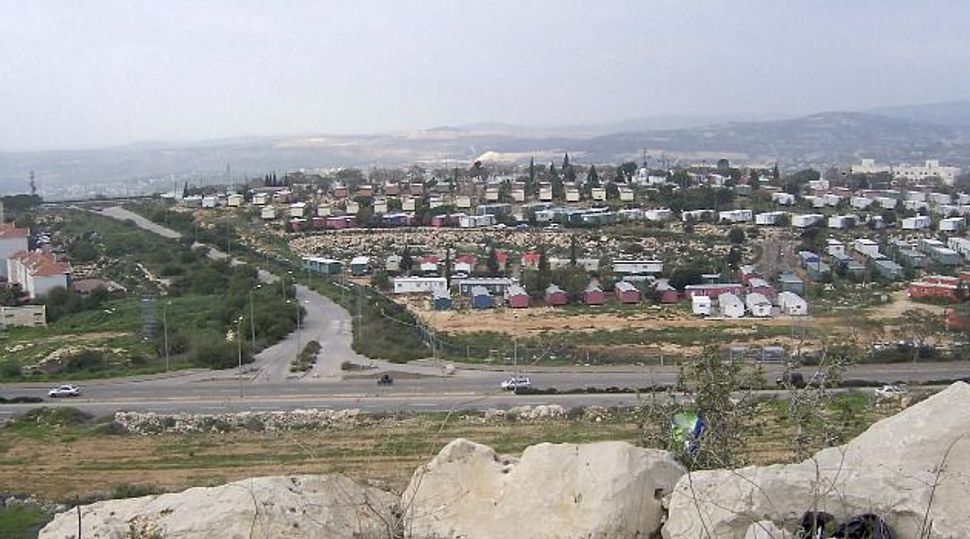 Bone of Contention: The settlement of Ariel juts into the West Bank, cutting it in two. Image by Nathan Jeffay

A while back, I wrote a column in which I urged people to boycott Ariel.

An explanation is in order here: Ariel is a town of some 18,000 people that juts 16 kilometers (10 miles) beyond the Green Line. It is, in other words, rather deep within the West Bank. It is 25 miles from Tel Aviv and 25 miles from the Jordan River. It forms a barrier between the northern and the southern West Bank.

My column recommending a boycott of Ariel led to some harsh comments. My favorite, so to speak, was in the form of an impassioned letter to The Jewish Advocate, urging that I be excommunicated, and suggesting that it be the Boston Federation that would do the excommunicating. This was, of course, utter nonsense, and the president of the Boston Federation was quick to leap to my defense — not on the matter of the boycott, but on account of my diverse contributions to the Boston community over the years.

Now I learn that I am in good company. On Christmas day, the Associated Press reported that “a trio of Israeli stage actors is refusing to perform in an acclaimed play before a theater in a West Bank Jewish settlement [in fact, Ariel], part of a burgeoning domestic movement against the government’s settlement policies.”

Would it were so. But the notion of a “burgeoning movement against the government’s settlement policies” strikes me as wishful thinking, of a piece with the AP report that “Israelis who once considered the West Bank inseparable from the rest of the country, or at least shrugged off the settlements as insignificant, have begun to protest the large government budgets promoting West Bank construction instead of solving a dire housing crisis plaguing the rest of the country. Others refuse to purchase settlement goods or perform reserve military guard duty in the West Bank.” If all that’s so, it is a well-kept secret.

As to the actors and the play, what we know is that three cast members asked to be excused from performing at the cultural center in Ariel. They were granted exemptions and were replaced by alternates, allowing the show to go on. The Cameri theater said it was committed to staging the show in Ariel but would respect the political positions of its artists. “The theater does not force its actors to perform in Ariel. Those who are not interested are replaced by their colleagues,” it said in the statement. “The Cameri theater chose to allow its actors to exercise their freedom of expression and follow their conscience.”

One of the actresses, Sarit Vino-Elad, said she could not bring herself to step foot in a theater built on occupied land and which posed an obstacle to peace with Palestinians.

“This is not a boycott. It’s my own little protest against a government policy that continues to build settlements,” she told the AP. “They are trying to make Ariel part of the consensus, but as far as I am concerned it is not legitimate. You want me to perform there? Solve the problem.” Vino-Elad said her colleagues would have preferred to stay quiet for fear of political backlash — but she could not. “We don’t want to create world wars here, we want to make theater,” she said.

Ariel Turjeman, the director of the Ariel theater, played down the protest, saying the actors who refused to perform in the West Bank were a tiny number compared to the thousands who did. He said the theater purchased a play, not an actor, and that the move is little more than a publicity stunt.

When Israel’s High Court approved the accreditation of Ariel’s university – the first beyond the Green Line – Deputy Education Minister MK Avi Wortzman welcomed the court’s ruling, saying that it “reinforces the fact that [the city of] Ariel is an inseparable part of the State of Israel.” But although right-wing ministers and activists make grandiose promises regarding Ariel’s permanence as part of Israel, it is exceedingly difficult to imagine its annexation to Israel if and when a final two-state settlement is reached. It is a deception, a down-payment on endless dispute. In its own way, it provides us a litmus test: If you have no use for a two-state solution, you can celebrate Ariel; if you believe that only a two-state solution offers a happy ending to the conflict, then you must oppose Ariel. Or, in the present circumstances, boycott it.

For a Two-State Solution? Boycott Ariel