What Limmud Can Teach Us 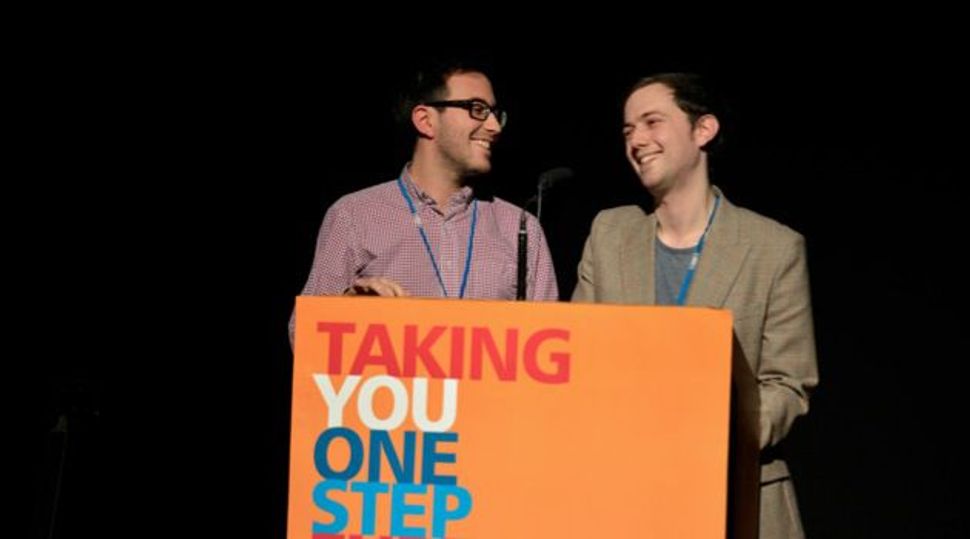 Under 30: The young co-chairs of Limmud UK. Image by Flix?n?Pix

The fourth and final night of the massive conference known as Limmud UK coincided with Christmas, but you’d never know it in the auditorium where thousands gathered on the campus of the University of Warwick in Coventry, several hours from London. Instead, the focus was on the two men who oversaw the annual marathon of non-stop classes, lectures, debates, dancing, prayers, performances and late-night sessions at the bar, all in service of self-styled Jewish learning.

Richard Verber and Oliver Marcus stood at a podium and did what co-chairs do: Thanked the very many people who made this Limmud the largest and, observers said, the most successful since the idea was launched in 1980. Two thousand, six hundred participants attended 1,102 sessions offered by 451 presenters from around the globe – an organizational challenge for even the most seasoned conference coordinators.

And they chaired Limmud in their spare time.

Limmud is an avowedly volunteer and egalitarian effort, and overwhelmingly young. One of the people in charge of the optional Shabbat weekend before the conference began on December 22 is only 25. One of the people overseeing the massive undertaking of feeding kosher food to thousands three times a day is the same age.

This was my first time at Limmud UK, and I was hugely impressed by the volunteer leadership of the under 30 crowd; I saw the same thing on a smaller scale at Limmud New York last year.

The contrast between this approach and the one taken by so many youth-engagement efforts in the American Jewish community is profound. Here we offer free books to Jewish toddlers even if their parents can afford to buy them; free trips to Israel through Taglit Birthright; free homey meals (and sometimes liquor) at Chabad houses on campuses across the country; thousands of dollars in grants and subsidies to young Jews with the inkling of a novel idea.

Limmud, instead, expects something from everyone. Volunteers get a break on the registration fee, and a few attendees invited from overseas (such as myself) are reimbursed for travel and accommodations in the dorms, but no one is compensated for teaching or lecturing or performing. Everyone eats the same awful food (I was told the fare is much better at the French Limmud!) and stacks their trays after meals. It’s like a gigantic, intellectual kibbutz.

And it is growing. Fast. Nearly 70 communities in 34 countries on six continents have hosted Limmud events, including for the first time last year Hong Kong, Peru, India and Montenegro. There are 18 Limmud communities in the U.S. and eight in Israel.

Most do not and cannot put on a show like the UK does, of course, but the ethos is shared. While there are now a few paid executives managing this sprawling, innovative empire, the vast majority of the work is done by volunteers, many of whom — like Verber and Marcus — come up through the leadership ranks.

Not only is it inspiring to see this effort, it is also instructive. Too often Jewish commitment is translated as simply writing a check, and these days even that behavior is sadly diminishing. What if we learned from Limmud, and expected more of each other — more of our time, our brains, our creativity and commitment? The best of Jewish life isn’t necessarily free. The young leaders of Limmud taught me that.

What Limmud Can Teach Us