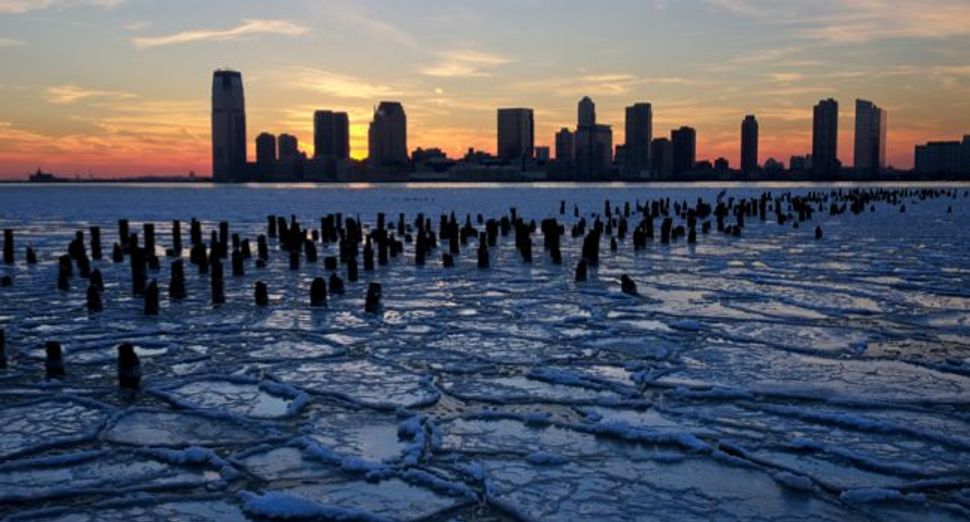 Frozen Over: Ice floes fill the Hudson River in early January during an extreme cold spell that fell over most of the country. Image by Getty Images

The new year elevated our national conversation to new heights of unreality, if that’s possible. Democrats in Washington presented 2014 as the year we tackle economic inequality, Congress permitting, which it won’t. Progressives fought to ensure we don’t forget immigration reform, gun safety and protecting abortion rights. Conservatives hoped to stand firm on budgets and roll back Obamacare.

And while Washington yacked, close to half the country couldn’t leave the house because of deadly cold. Nearly the entire continental United States was blanketed by frigid air in the second week of January. Two dozen states suffered record-breaking chill.

On this, our leaders had nothing to say.

Granted, it’s no big deal when towns and regions get cold. And sometimes whole sections of the country turn frosty at once. But when that big purple bad-weather swirl starts covering the whole map and half the continent is in full disaster mode, something’s going on.

If you’re tempted to giggle, go ahead. “Global warming brings winter chill?” Totally. Over at PJMedia.com the other day, online editor Rick Moran yukked that he had “just shoveled a foot of global warming off my driveway.” At Breitbart.com, Washington editor John Nolte chuckled about those “Global Warming-believing scientists” who sailed to Antarctica to see how the ice was melting, only to “run into a helluva lot more Antarctic ice” than anticipated. Good one.

And Rush Limbaugh reported that the “wackos” on the left have “come up with this phrase called ‘polar vortex’” to explain how global warming causes winter. Get it?

Well, not to spoil anyone’s fun, but that “polar vortex” thingie is just another name for the cold air above the Arctic Circle. Its perimeter is a cold wind, the polar jet stream, that circles the globe. They taught us about that in junior high. Maybe Rush was stoned that day.

Alert readers may recall me mentioning the jet stream before. It’s been acting funny lately. It seems that as the polar ice cap melts, the Arctic Ocean’s dark surface absorbs the sun’s rays instead of bouncing them back into space, as a solid ice sheet does. The warmer sea heats the air overhead a tad. This slows the jet stream, causing it to bulge southward in unpredictable ways. Cold Arctic air follows behind, like the air in a balloon when you squeeze it.

Southward distortions of the polar jet stream are nothing new. Lately, though, as the ice melts, they’re getting bigger and more frequent, with extreme consequences.

One bulge wandered over Greenland in October 2012 and collided with an Atlantic hurricane. Northbound hurricanes generally curve eastward and out to sea, often sideswiping New Jersey and Long Island as they go. But Hurricane Sandy bumped into the Greenland bulge and bounced westward, crashing head-on into the nation’s largest city. Factor in warming oceans, which increase storms’ intensity, and rising sea levels, which sent waves cascading over whole towns, and you have a natural disaster of historic proportions.

Global warming didn’t create the hurricane, but it turned a commonplace misfortune into an epic calamity.

Another Arctic bulge over the Great Plains collided with a mass of warm, wet air moving north from the Gulf of Mexico in September 2013. The collision produced five days of unprecedented rain, causing the worst flooding in Colorado history and $2 billion in damage.

And now, the Big Freeze of January 2014, blanketing a continent with record cold. This wasn’t just a wintertime coincidence. It was an extreme weather event. These used to occur somewhere in the world every couple of years. Now they’re happening everywhere, month after month. And when the same coincidence happens over and over, it’s no longer a coincidence.

In the past few months alone, the strongest storm in recorded history hit the Philippines and the largest tornado ever seen struck Oklahoma. Central Europe had its wettest spring ever, and Scandinavia its hottest summer. And that’s just 2013. The past few years have seen biblical floods in Australia, unfathomable heat waves in Russia and drought covering four-fifths of the continental United States, altogether wiping out up to one-third of the world’s wheat crop. A growing band of central Africa is drying out and becoming a famine belt. Perhaps most dramatic: the European summer heat wave of 2003, which is now known to have killed some 70,000.

While scientists around the globe scramble to understand a fast-changing reality, the world’s governments meet annually to try and forge some joint strategy for coping.

The global reality is summed up in the Assessment Report of the Intergovernmental Panel on Climate Change, now in its fifth edition. It’s a three-part survey of some 10,000 peer-reviewed studies, summarizing current scientific knowledge, observable impact and possible responses.

Part 1, published in September, reported that while global warming is an unequivocal fact, the role of human activity — mainly burning fossil fuels — is a 95% certainty, up from 90% in the last report, in 2007. That might not sound like a big deal, but it means the uncertainty has fallen in half.

The amount of carbon in the atmosphere has risen about 40% since the start of the Industrial Revolution. It’s now at its highest level in 800,000 years. The measured rise in average global temperature since 1880 is about 0.8 degrees Celsius, or 1.4 degrees Fahrenheit. If carbon emissions continue at their current rate, IPCC predicts a further rise by 2100 of 1.5 to 4 degrees Celsius (2.7 to 7.2 degrees Fahrenheit).

Sea levels have risen about 7.5 inches in a century. At current emission rates they’ll rise another 2 to 5 feet by 2100, enough to inundate coastal cities like Shanghai and New York. So far, incidentally, measured outcomes have nearly always exceeded high-end predictions.

As for governmental coping strategy, that’s a bit stickier. Politicians grumble about the economic cost of reducing carbon use to slow emissions. Nobody wants to bite the bullet. And the cost only rises. Planners now speak of a three-part price tag: cutting emissions; adapting infrastructures to survive the catastrophes we can no longer avoid; and repairing the damage each time. All told, we’re talking about trillions of dollars in the next few decades, like it or not. Next to that, lost income from cutting coal is chump change.

The bigger problem: Who pays? Developing nations, led by top-emitter China, want the industrialized West to bear the brunt since it produced most of the carbon that’s in the air now. They want the freedom to catch up before they pay their share. The West, led by Britain and Europe, wants everyone to cover their own emissions going forward.

America, the second-biggest emitter and still the world’s largest economy, isn’t even in the discussion. Congress, you know.

That’s what we should be talking about. Everything else — everything — is secondary.