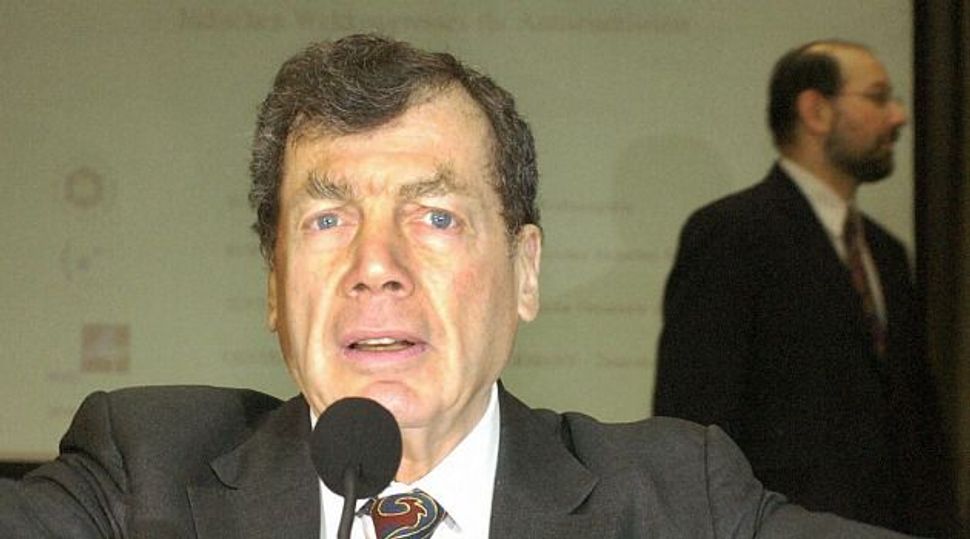 Three noteworthy deaths, though only two of the three are notable.

There was a time I knew Edgar Bronfman, who died recently at age 84, quite well. He was helpful to my progeny, Moment Magazine. We’d have lunch, once a month or so, in his private dining room in the Seagram building in New York, where the food was always good and the wine memorable. I was unable to leave our luncheons without generating the fantasy that as I was leaving, he’d say, “Oh Leonard, wait a minute, I have something for you,” and forth would come a check solving all Moment’s financial problems, best summarized by explaining that where solid enterprises had healthy cash flow, we had, at best, cash trickle. Fantasy.

He loved showing off his Hebrew, which, truth to tell, did not warrant showing off, even though his tutor was Rabbi Arthur Hertzberg, arguably the smartest Jew in America. And we’d verbally tour the Jewish waterfront, a nice way of describing gossip.

Once, at a small fund-raising dinner he threw for Moment, I drank a bit more wine than was wise. I wasn’t drunk, but my tongue was loosened, and I leaned over to him and said, “Edgar, life is strange. Under other circumstances, we might be good friends.” He looked at me and replied, “But Leonard, we are good friends.” This from a man of whose private and family life I knew nothing more than occasionally appeared in the newspapers. But so, I thought, it must be with the super-rich. It is not easy for them to have real friends, since they are not wrong in assuming that those who extend friendship to them have, let us put it delicately, an agenda.

When Phil Klutznick was named Secretary of Commerce by Jimmy Carter, he asked Edgar to keep his chair as president of the World Jewish Congress warm until he’d left government service — but Edgar so enjoyed that chair that he did not give it up, and in fact sat in it, with distinction, for more than 25 years.

A very different death recently in Gaza, the death of a great humanitarian, Eyad El-Sarraj. He was a psychiatrist, founder of the Gaza Community Mental Health Program. I visited with him only once, and cannot claim to have been his friend. We met only once, by chance the day after I’d visited Sderot, the target of near daily missile attacks launched from Gaza. I toured Sderot, saw that the town planners had placed all playground and schools within easy distance from shelters, felt sick to my heart, and was not at all surprised when my hostess on that visit remarked that “all the children here suffer from PTSD — post-traumatic stress disorder.”

And then, less than 24 hours later, Kathleen Peratis and I were to hear the very same words from El-Sarraj, describing the children of Gaza. We were sitting in his abundant garden, fruit trees and diverse flowers everywhere, next to a house I am tempted to call “palatial,” which it surely was in the context of Gaza’s pervasive misery. During Israel’s bombardment of Gaza in 2009, he published an Oped essay in the Times in which he wrote, “Many children in Gaza are wetting their beds, unable to sleep, clinging to their mothers. Worse are the long term consequences of this severe trauma. Palestinian children in the first intifada 20 years ago threw stones at Israeli tanks trying to wrest freedom from Israeli military occupation. Some of these children grew up to be suicide bombers in the second intifada 10 years later. It does not take much to imagine the serious changes that will befall today’s children.”

As the Times noted in its lengthy obituary, his home had become a must-visit to journalists, diplomats and researchers, because he had so much to say. And what he had to say was principally about the centrality of non-violence. This Kathleen knew well, for she became his friend in recent years, met with him four times, visited with him during all her recent trips to Gaza, the last as death approached and she was given just 15 minutes with him — 15 minutes that morphed into a three hour conversation, still overflowing with hope. El-Sarraj, who could have lived anywhere in the world, so respected internationally was he, chose to remain in Gaza. He had two overriding passions — non-violence, and a reconciliation between Fatah and Hamas.

His death is a loss to the forces of life in that largely benighted region.

Finally, Hugh Nissenson, an author and novelist and one of the sweetest men I have even known, died in New York City, where he’d live ever since we first met, back in 1960, when he was covering the Eichmann trial, many sessions of which I attended. He was in great pain in his last years, but he remained wonderfully curious and even ambitious, and I lament his passing.

For all these, baruch dayan ha’emet.