Are Social Conservatives Finally Growing Up? 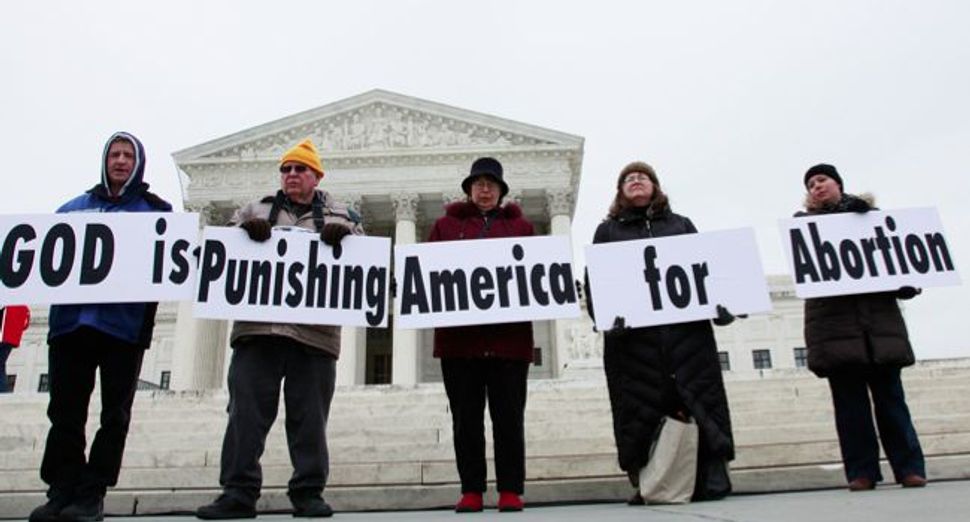 The Exception: Abortion is the one issue where the numbers of opponents has not shifted in any significant way. Image by Getty Images

Before I was born, these were the frontiers of the social revolutions sweeping America. The favorite moments of the Boomer generation — Woodstock, the Summer of Love — combined all three. And while the political revolution the Beatles sang about never quite came to pass, the Sixties’ changes in moral values seem here to stay.

They are by no means unanimously endorsed. If nothing else, the Reagan Revolution of the 1980s was a great rejection of all the Sixties had proposed. It was a marriage of economic conservatism and social conservatism: free markets and regulated behavior, the Wolf of Wall Street and the Christian Right.

Thirty years on from Reagan, the marriage is coming apart. America has continued to drift rightward on matters of economic policy. The wealth gap is larger than it has been in a century. A Republican-hatched giveaway to health insurance companies is popularly derided as Socialism. And proponents of the social safety net are playing defense, not offense.

The only exception to this moral shift is reproductive rights. According to the CNN poll, 57% of Americans believe abortion is morally wrong — that’s roughly the same as the 1987 numbers, and well above the 44% who believed it wrong in 1977. More on this in a moment.

Of course, the striking shifts in American attitudes toward sex and drugs are largely generational in nature. Old ideas, and the people who hold them, are simply passing away. But they also say something important about the sources of moral authority.

It used to be that right was right and wrong was wrong, and you knew these things because people told you so. They had authority, they interpreted the Bible for you, and they talked about God, morality, and truth. The major religions could quibble about the details, but they agreed about the basics of sin.

That view, though, has been steadily eroded by centuries of truth-seekers of various types, who have pointed out various scientific, historical, and ethical flaws in the age old authorities. Turns out God didn’t create the world 6,000 years ago. Turns out He didn’t write the Bible. Turns out He may not exist at all.

The trouble is, those claims are false. As we’re seeing now in Colorado, the sky doesn’t fall when people smoke pot. Nor do heterosexuals stop making babies because gays get married. Sure, the jury is still out on the long-term effects of these social changes. But when you smoke pot, or get to know your gay relative, you can see for yourself that the scolds are wrong. Worse than that — they look stupid.

The popular moral intuitionist Jonathan Haidt has proposed several emotive/instinctual bases for morality. Some of these are familiar to all of us: promoting care over harm, fairness over cheating, liberty over oppression. Other moral foundations, Haidt has claimed, are more specifically conservative: loyalty, authority, and purity.

Haidt argued that liberals need to learn all six moral languages if they are to be effective political communicators. But the shifts in public morality suggest that, in fact, some of those languages may be spoken less and less. Instead of viewing all six moral bases as equivalent, maybe some of them are stages we’re meant to outgrow.

In shifting from claims of authority and purity to those of avoiding harm, moral conservatives already declared defeat. They took a risk that traditional purity values would also happen to be beneficial, harm-avoiding ones. But the jig, increasingly, is up.

This, I think, is one reason reproductive freedom remains a moral outlier. Lots of Americans believe that someone is harmed when a woman has an abortion: the fetus. Many more believe that fetus has a “soul” implanted in it at conception. Pot smoking, cohabitating, and being gay are, at least on their face, victimless actions. Of course, persistent sexism and misogyny are also crucial factors, but pro-choice advocates have yet to succeed in depicting abortion as similarly victimless.

Recourses to traditional values seem less and less appealing when it comes to victimless — indeed, arguably beneficial — actions. Maybe that’s because fewer and fewer people believe in the Source of those values. Or maybe it’s because their proponents have been disingenuous about why they hold them.

At the end of the day, conservatives’ real motivation isn’t marijuana addiction or promoting child-centric family units: it’s God. And while it is sincerely frightening when it looks like that particular God isn’t watching over us after all — and religious conservatives are sincerely frightened — there is a word for the slow process of critical analysis, moral reflection, and introspection that takes Its place. It’s called growing up.

Are Social Conservatives Finally Growing Up?