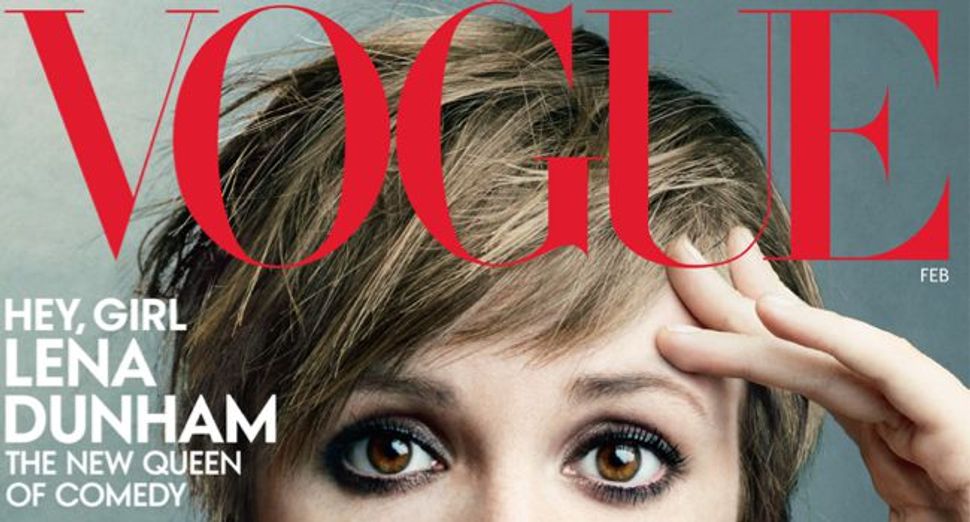 Progress: Photoshopped or not, the fact that Dunham is on the cover means Vogue is changing. Image by Vogue

Lena Dunham’s appearance on the cover of Vogue could have been a cause for celebration. Long a domain for women whose principal achievements include having an impossibly symmetrical face and a wasp waist, the “Girls” creator is one of the first who was given the spot primarily because of what she’s got going on within. Instead, the arrival of Dunham’s Vogue cover this past week became the source of much controversy. Women’s website Jezebel put out a $10,000 bounty for the untouched images of Dunham’s photos for the magazine, because they wanted to see what “Vogue decides to do with a specific woman who has very publicly stated that she’s fine just the way she is, and the world needs to get on board with that.”

Within hours, Jezebel got the photos which had, in the realm of photoshopped cover girls, pretty minor differences from those published. Jezebel also got a whole lot of pushback from media critics, feminists and even Dunham who said that she can’t “understand why, photoshop or no, having a woman who is different than the typical Vogue cover girl, could be a bad thing.”

What’s clear from all this is that women’s bodies are still a battleground, internecine conflicts and all, in the fight for the liberation of us double X-ers. What’s also clear is that we are totally winning. This is the case within mainstream culture, and in the Jewish world too.

Lena Dunham was on Vogue! This was a victory not just for Dunham herself, but also for Jezebel. This could have been their chance to take a bow, strike a Heisman, or have a semi-ironic toast over a couple of Cosmos. Because the big story here wasn’t what Vogue did to Dunham, but what Dunham, Jezebel, and the entire women’s blogosphere did to Vogue. Add to this the recent Elle magazine covers featuring actresses Mindy Kaling and Melissa McCarthy and it becomes clear that Dunham’s appearance wasn’t an anomaly, but a sign of a real shift of what makes a women cover-worthy. The tyranny of the size two is over!

Jezebel, for which I have written, was founded 6 years ago by Anna Holmes to highlight, mock, and ultimately deconstruct the many damaging ideals women’s magazines thrust upon women. Quickly, the site became not just a blog, but a way of being. Women saw the power of the Internet as a medium to tell our versions of how things really are and reach a rather large like-minded audience. We had a real tool, a platform to point out the hypocrisies and double-standards in the world around us, and we could be funny too.

Jewish women seized this opportunity to deconstruct concerns of their own. Here on the Forward’s women’s issues blog, The Sisterhood, women speak openly about things like eating disorders in the Jewish community, plastic surgery, beauty, and whether or not it is okay to tell your friends that they look great. (I said it is.)

Though perhaps more touching is the way in which Orthodox women have taken advantage of the spirit of openness and reform that the women’s blogosphere created to write about the struggles that are uniquely their own. Last November, Frimet Goldberger wrote a touching essay about her decision to stop shaving her head in accordance with ultra-Orthodox law. She described the “hot tears of frustration, anger and humiliation” she felt with her final shave, and how those feelings prompted her and her husband to leave the community for good.

In her Forward series “Inside Out,” former Hasidic Judy Brown wrote about the great transgression that was wearing patterned pantyhose, and the feelings of despair, if not full-on post-partum depression, felt by mothers of the typically large families in her community. After years of being told that women, by virtue of having uteri, are “holy vessels,” she comes to realize “that motherhood cannot complete you if it consumes you, that our lives are worth more to God than any wasted sperm and that the real sin is to believe that the unborn soul is more important than any mother’s life could ever be.”

Like Dunham, Brown told her story not just the way she saw it, but the way she felt it too. Doing this requires courage, a steely will, and lots of endurance too. Because before a woman can come to tell a story like this they must first peel off the layers and layers of narratives they have absorbed telling them how they should look, act and think. It is only after this process of excavation and deconstruction, a process that the women’s blogosphere initiated, can they truly access their experiences and make meaning out of them.

Here’s to more stories, and more bodies, like theirs in the future.