There’s a Good Reason for ‘Singling Out’ Israel 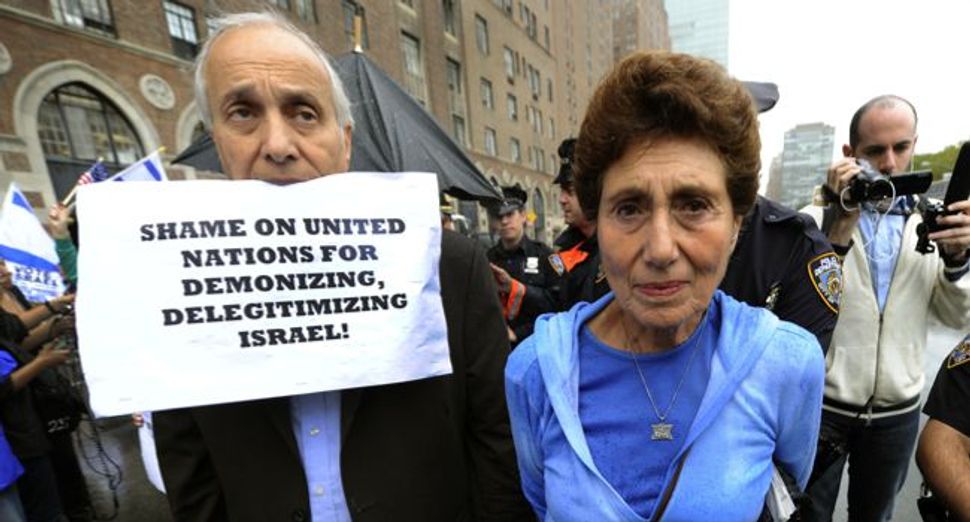 Double Standard!: The frequent accusation hurled against the United Nations for its focus on Israel. Image by Getty Images

In a recent letter to university officials, Hillel President Eric Fingerhut and Israel on Campus Coalition Executive Director Jacob Baime decried “efforts to hold Israel to a different standard than any other nation.”

Is that true? Is Israel being held to a different standard than other nations?

Here, I will argue first that the different standard is appropriate, and second that this whole claim undermines Israel’s legitimacy.

To begin with, yes, of course Israel is held to a different standard than China, Russia, North Korea, Iran and other countries with far worse human rights records.

But Israel is also situated differently. Unlike the countries listed above, Israel is the leading recipient of. foreign aid from the United States (briefly in second place to Afghanistan, but that will soon change). Moreover, Israel’s policies are, rightly or wrongly, defended against nearly global opposition by the United States government. One could argue that but for that support, those policies would not exist.

Moreover, boycotting Israel (in whatever form) is also a response very different from the severe economic sanctions against Iran, for example, or the threats of military action against North Korea. The Boycott, Divestment and Sanctions movement supports actions that make sense in the context of a highly subsidized American ally. Were the situation different, presumably the tactics would be different, too.

But the “different standard” charge is worse than misguided; it undermines the very cause its supporters hope to advance. The charge’s obvious subtext is that anti-Semitism is the real motivation. “Why don’t these student activists focus on North Korea? Why the focus on Israel? Hmmm…?” In the absence of any rational justification, an irrational one is supposed.

This accusation, overt or covert, is patently absurd to any college student who knows a BDS supporter (which, to remind readers, I am not). Sure, there are some genuine Jew haters, terrorist sympathizers and other baddies in the crowd. But most BDS supporters on campus are earnest progressives, and anyone not already in the American Israel Public Amen Corner can see that.

Now let’s see how this plays out. Suppose you’re a moderate, and moderately informed, college student. You go to Hillel, and the pro-Israel people there tell you that the BDS movement is “unfairly singling out” Israel or “holding it to a different standard.” They imply that the reasons for this are sinister. Then you walk down your dorm hallway, and chat with your friend who supports BDS. What do you now think of the pro-Israel crowd?

Well, you think they’re idiots, or zealots, or both. You think, these people are so blinded by their tribal nationalism that they cry foul when anyone opposes them. You think that to be pro-Israel is to be biased, paranoid and ignorant.

Lest you think I am exaggerating, let me say that I myself felt this way at a recent academic conference, where representatives from StandWithUs and other organizations depicted the BDS movement as driven by anti-Semitism. Since the Jew-hating straw man they described was so unlike the actual activists I know, I wondered if they’d even met the people they were talking about. The depiction, itself, seemed like animus. At best, it seemed ignorant.

Of course not. Such language preaches to the converted, and alienates the middle. It further polarizes the discourse and makes it look like the pro-Israel side can’t win the argument on its merits. Instead of defending the occupation, or attacking the BDS tactic, or explaining why the wall/settlements/checkpoints are justified, the leading pro-Israel voices just say the other side is bigoted. They look pathetic.

Today’s college students were born into a world with a nuclear Israel, bankrolled by America, with military might that can crush its enemies. It is absurd to look at images of Palestinian homes being ransacked by Israeli soldiers and then be told that Israel is the victim of a “different standard.” Name another beneficiary of American foreign aid that behaves this way.

The boycotters may be wrong, but they’re not singling out Israel irrationally. On the contrary, Israel’s defenders are the ones being irrational.

There’s a Good Reason for ‘Singling Out’ Israel