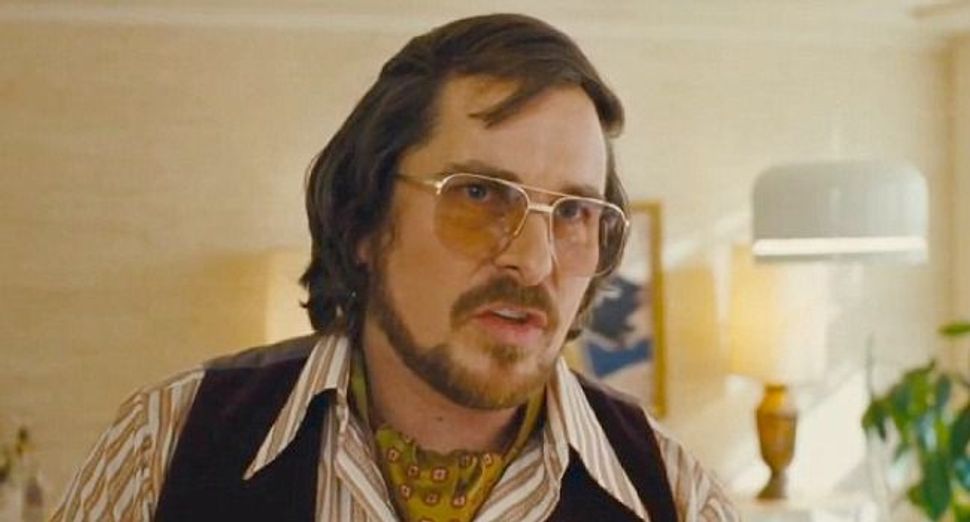 Hustler: A long way from Al Jolson and the Jazz Singer. Image by Sony Pictures

This year’s Oscar nominations are stirring angst in certain corners of the Internet, because of something that looks suspiciously like a new trend: movies about Jewish con men.

Granted, it’s just a couple of movies. Hollywood makes all kinds. Everyone knows they’re fake. That’s why it’s called the Dream Factory. Sure, some movies try to talk seriously about big issues. But not the movies we’re discussing.

One, “American Hustle,” is essentially an old-fashioned caper flick, sort of updating “The Sting.” The other, “The Wolf of Wall Street” is a black comedy about debauched excess, part “Bachelor Party,” part “The Doors.” In both films the con men end up looking more like charming rogues than evil wizards.

And yet, a line has been crossed. Yes, Hollywood makes movies about all sorts of things, including Jewish gangsters and fools. But it hasn’t made movies about crooked Jewish financiers. That’s too close to the classic anti-Semitic trope.

Well, no longer. Now, suddenly, two of the year’s most celebrated movies are about Jewish swindlers. This, writes critic Naomi Pfefferman of the Los Angeles Jewish Journal, is “the cinematic season of Bad Jews.”

What’s more uncomfortable, they’re both about real people. “The Wolf of Wall Street” is based on a memoir by the very real Jordan Belfort, who recruited a small army, he wrote, of “the most savage young Jews anywhere on Long Island” to man his crooked brokerage. “American Hustle” is a fictionalized version of Abscam, the 1970s FBI sting run by another real Jewish con man, Mel Weinberg. This stuff isn’t made up.

True, neither film features a villain on the scale of Bernie Madoff. For his story, watch a third Oscar nominee, “Blue Jasmine,” loosely built around a Madoff-type swindler played by Alec Baldwin. Its characters aren’t Jewish. But, hey, it’s made by Woody Allen. Enough said.

Is Hollywood trying to tell us something? Not consciously. It’s merely doing what Hollywood does, producing entertainment that mirrors the zeitgeist. It’s a sort of national Rorschach test, absorbing America’s subconscious thoughts and bouncing them back in high definition.

Right now America is thinking about the unending financial crisis. And when we think about the crisis, we encounter names like Lehman, Goldman and Sachs. Like Fuld, Blankfein and Greenberg. We taught ourselves and our neighbors years ago not to notice when names like those surface in these situations. Noticing can spawn ugly thoughts.

The question is, how much longer can we expect folks not to notice? Maybe that’s what these movies are saying. Maybe something is bubbling in America’s subconscious that we need to think about.

You can trace the evolving image of the Jew in the mind of America by looking at the movies. Leaving aside the first talking picture, “The Jazz Singer,” movies about Jews in early Hollywood were infrequent, cautious and mostly high-minded. “The House of Rothschild,” a regal biopic, was nominated for best picture of 1934. In the immediate aftermath of the Holocaust, two 1947 movies about American anti-Semitism were nominated — “Gentlemen’s Agreement,” which won, and “Crossfire.”

It was in the mid-1960s that Jewish themes became standard Hollywood fare. They’ve come in waves ever since, reflecting America’s evolving image of Jews.

The first wave was autobiographical: a long string of quirky films about schlemiels and misfits seeking their place in America: “A Thousand Clowns” (1965), “Goodbye Columbus” (1969), Barbra Streisand in “The Way We Were” (1973), Woody Allen’s “Annie Hall” (1977) and many more.

Early in the 21st century, though, the Jewish image shifted again. A sudden wave of films portrayed morally conflicted Jewish fighters, neither gangsters nor noble warriors but uneasy, compromised defenders of the Jews: a Mossad assassination squad in “Munich” (2005) and a vengeful band of anti-Nazi partisans in “Defiance” (2008). Jewish heroes became slapstick clowns in “The Hebrew Hammer” (2003) and “Don’t Mess with the Zohan” (2008). For the first time, Jews were shown as flawed, capable of doing wrong as Jews.

The same message emerged in a sudden wave of Israeli Oscar-nominatees: the antiwar films “Beaufort” (2008) and “Waltz with Bashir” (2009), the noir Israeli-Arab melodrama “Ajami” (2010), the anti-occupation documentaries “The Gatekeepers” and “Five Broken Cameras” in 2013. And this year, for the first time, a foreign feature nominee representing “Palestine.” Titled “Omar,” it’s a love story set amid resistance to the occupation. Israel is no longer the hero.

Thus the stage is set for Jewish swindlers. Our protective layers of innocence, victimhood and vulnerability have been successively peeled away. A blogger at Jewlicious.com captured a widespread feeling about the 2014 nominees in a post headlined “Noble Arabs, Con-Men Jews Score Oscar Nods.”

But complaining is no longer enough. As L.A. Jewish Journal editor Rob Eshman argued in a gutsy December 31 essay, it’s time for the Jewish community to start examining itself. “Are the Belforts and Madoffs unnatural mutations,” he wrote, “or are they inevitable outgrowths of attitudes that have taken root in our communities?”

“We are blessed to be living at a time of unparalleled Jewish power and wealth, and it makes us so uneasy, we prefer to talk about everything but,” Eshman wrote. “…We are enjoying unprecedented wealth as millions struggle on minimum wages, facing hunger, unemployment, benefit cuts, homelessness. We look to our rabbis and institutions for guidance, but too many of them are afraid to upset the wealthy donors upon whom they are dependent. So we talk instead about Israel, about Swarthmore, and our communities become breeding grounds for the next Madoff, the next Belfort.”

He’s right. We need to talk.