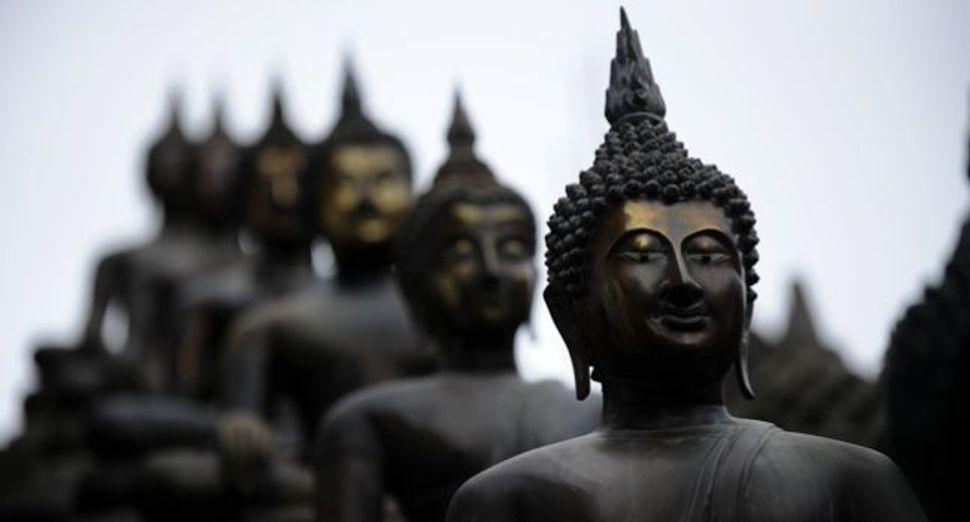 Inner Peace: Jews are missing an opportunity to integrate meditation into the community?s life. Image by Getty Images

The current cover of Time magazine features a blissed-out and beautiful blonde, captioned with the text “The Mindful Revolution.”

The images are cliché, but the Time cover story is but the latest in a long line of significant — possibly historic — changes in how Americans regard contemplative practice. It recounts the fascinating evolution of mindfulness meditation, which in its Western form, is largely about learning to “pay attention in a particular way, on purpose, in the present moment and non-judgmentally.” (Those are the words of Jon Kabat-Zinn, one of Western mindfulness’s leading teachers.) It tells how mindfulness has moved from Buddhist religious practice, to “spirituality,” to a ubiquitous, secular technology of mind — and a $4 billion industry. And it follows the writer, presenting herself as a kind of hapless every-person, as she discovers firsthand how a few basic meditative skills can help her relax.

Nothing major here. But where the Time story ends, the interesting part begins. As Richard Davidson, the preeminent scientific researcher of mindfulness, told me, we ain’t seen nothing yet. (Yes, I am paraphrasing.) Over the last twenty years, a significant scientific literature has been amassed, clearly establishing how mindfulness affects behavior, and how it affects the brain. There is no longer any significant doubt about this. But the real kicker, Davidson said, will come when we have an econometric analysis of how much money all this will save.

Think about it. If mindfulness improves immune function by, say, 5%, and that decreases healthcare utilization by 1%, that means $10.7 billion in annual savings nationwide. And that’s just a back-of-the-envelope calculation. In reality, mindfulness has been shown to quadruple the speed of healing from various health conditions, cut in half the relapse rate among patients suffering from depression, reduce ADHD, counter age-related declines in brain function… the list goes on (and the citations to the relevant studies are all in my most recent book, Evolving Dharma). All this for an intervention that requires no drugs, no hospitalization, and only a modicum of skilled instruction.

If you’re a health insurance executive, dollar signs should be popping out of your eyes right now. According to the best data we have today, and in this case the data is pretty good, mindfulness is the bargain of the 21st century.

Ironically, the Jewish community is largely missing the boat. The opportunity is golden: There are Jewish meditation groups all over the country, national organizations like the Institute for Jewish Spirituality and Hazon, as well as a decently well-endowed bookshelf of Jewish meditation manuals, histories, anecdotes, and stories. There’s a tradition that goes back hundreds of years, if not more, and which has recently been greatly enriched by contact with others. As a result, we Jews have an excellent product that many people are clearly interested in trying out.

But we’re not serious about it. Build a Holocaust memorial, and it’s hard not to raise money. But try and fundraise for a serious campaign to help synagogues, JCCs, and Jewish schools put mindfulness at the center of their activities — and your proposal will twist in the wind, met only by the sound of crickets.

Indeed, with the imminent departure of the Nathan Cummings Foundation from the Jewish funding scene, the number of major Jewish federations and foundations which take contemplative practice seriously is… zero.

What a waste. Here we are, sitting on top of a valuable asset that people actually want to know more about, but those with their hands on the purse-strings still think of “spirituality” as airy-fairy, weird, or worse. Forget the scientific data, the market demand, the presence of mindfulness in the halls of Google and Twitter. No, this must just be hippie stuff.

Of course, mindfulness is not a panacea, and Jewish meditation is not for everyone. With secular versions of mindfulness training easily accessed (online, in schools, in hospitals, even in the U.S. military), one could argue that the Jewish iterations won’t be of much interest. Of course, the same could be said of Jewish social service agencies, Jewish political organizations, even Jewish cocktail parties.

We need a Jewish mindfulness Birthright. We need the resources to take meditation out of the poorly-ventilated basement room on Tuesday night, and better communicate to wider, non-weird, and non-spiritual audiences how building neural networks in your pre-frontal cortex is both a very smart and very Jewish thing to do. We need to separate the gold from the dross, recognizing that there’s plenty of each within Jewish (and other) traditions. And contemplative practice should sit alongside text, tribe, food, Israel, social justice, environmentalism, and a dozen other possible center-points for the spokes of Jewish identity. Again, not for everyone — but for many.

Finally, we as a community could benefit from some mindfulness based stress reduction. What if interruption, resentment, and indignation were seen as emotionally toxic, rather than Jewishly appropriate? What if the hate tweets I receive on a daily basis didn’t have such a righteously indignant justification? What if we stopped respecting the spiritual infants who have such outsized roles in Jewish institutional life — even if they happen to be billionaires?

I admit, I’m dreaming here. But there’s no need to get utopian about it. Mindfulness works. Even Time magazine says so. The question is, can we as a community get over our preconceptions and realize that we’re sitting on a goldmine? Maybe we need to meditate on it.