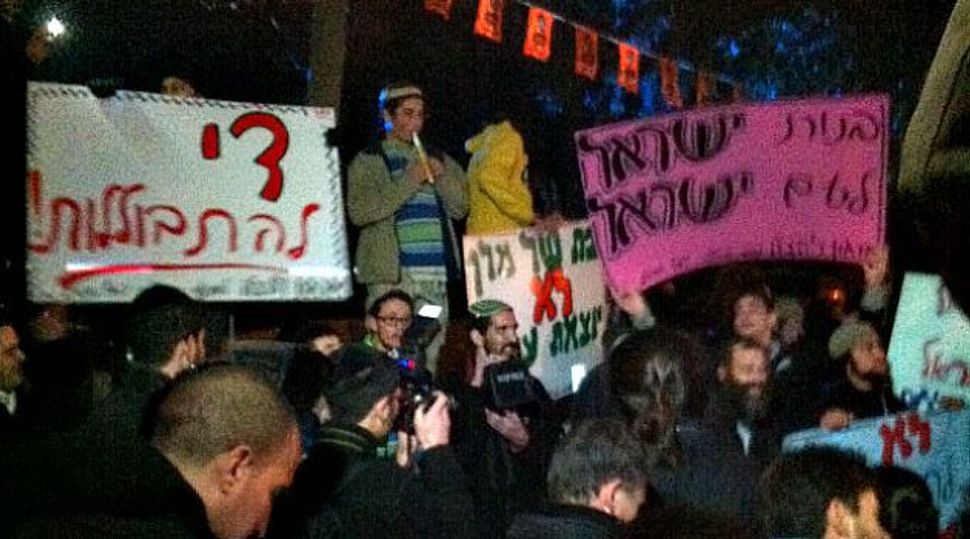 Settler youth bear signs reading “Girls of Israel for the nation of Israel,” “A king’s daughter doesn’t date a non-Jew,” and “No more assimilation!” / Elisheva Goldberg

Last night in Jerusalem, Arabs and Jews (well, mostly Jews) got together at an event called “Pashut Sharim” or “Just Singing,” a four-year-old initiative funded primarily by Hillel and the Pratt Foundation that brings Arabs and Jews together in song. In practice, given that the event took place in the heart of West Jerusalem’s hippie-cum-hipster Nachlaot neighborhood, there were very few Arabs present. But that didn’t seem to matter to the settler youth who came out to protest the Arab-Jewish mingling. Nor did it stop the liberal-lefty students from counter-protesting. Sure, last night’s protest bears witness to the intense power of political ideology that can cleave a nation in two. But the fight is also…really fun.

The subject of the protest was Jewish assimilation, the supposition being that Arab men, if allowed to inhabit the same space as Jewish women, would either tempt them into intermarriage or simply seize them without a second thought. It was organized by the ultra-right organization LEAVA, whose acronym stands for “Preventing Assimilation in the Holy Land.” It’s a group run by Benzi Gopstein, an outspoken Kahanist and elder statesmen of the Hilltop Youth. He founded the organization with the explicit belief that the purpose of Israel — indeed, Zionism itself — is to keep Jewish people Jewish. His activities to ensure such a state of affairs are as intrusive as they are varied.

Last year, he wrote a letter to Mark Zuckerberg beseeching him not marry to his long-time non-Jewish girlfriend. One of LEAVA’s fantastical promotional videos shows a Jewish girl being wooed by an Arab man only to find herself caged, beaten, and wearing a naqab (face-veil), though she is eventually emancipated by a smiling Gopstein who leads her back the Kotel. Most recently, he made an appearance on Israeli talk shows where he advised Netanyahu on how to convince his son to break up with the Norwegian woman he’s dating.

Though Gopstein and his posse had no trouble declaring their disdain for democracy last night, pronouncing themselves “proud fascists,” most of the protest wasn’t about the issues. It was about the fun of protesting. When the students from inside the Pashut Sharim event finally joined the protestors (along with the police who separated the sides) much of the seriousness evaporated, and something much less akin to civil war and much more akin to color war began to emerge.

The chants went back and forth. The settler youth would chant, “Kahane was right and you’re the proof!” to which the coexistence singers would answer, “Darwin was right and you’re the proof!” — and then both sides would smirk like they’d won. A good volley might sound like this: [Kahanists:] “Leftists are Satan!” — [Singers:] “Better Satan than a Racist!” — [Kahanists:] “Racists forever!” — [Singers:] “Racists go home!” — [Kahanists:] “Judaism is Racism; no to Assimilation!” There was fun in the air. A friend of mine started my favorite back-and-forth; the settler youth would begin, “Girls of Israel for the Nation of Israel!” and she would scream back, “Girls of Israel for Girls of Israel!” Others riffed: “Girls of Israel for Whomever they Choose!” And so on.

One of the leftist protestors, who had come deliberately as a counter-protester and had even brought a sign reading “No one asked you, LEAVA,” said that “of course” he was having fun — he had “music, friends, and a circus!” Another liberal fellow, who would periodically appear to hawk random Arab food items (“Hot kannafe!” Turkish coffee!”), described the experience as a “nature party without the drugs.”

While none of the LEAVA protestors were willing to admit they were having fun — Jewish assimilation being a very serious issue in the Jewish State, after all — they had come prepared with colorful signs, one of them had brought a kazoo, and their champion, Baruch Marzel, showed up to give them a pep-talk in the middle of it all. They had all chosen to come to Jerusalem from far-flung settlements — some of them on busses arranged by Gopstein — for this, what appeared to be their Saturday night activity. They were clearly enjoying it: the attention, the sense danger, and likely most of all, the feeling of being on a team.

And that’s the catch. While that sense of being in the fight can be exciting — exhilarating, even — it covers up the bigger issues at stake: deeply held belief in inescapable racial hierarchies, an overtly anti-democratic approach to civil liberties and education, and one of Israel’s real problems today — the fact that it’s legally impossible for a Jew to marry a non-Jew on state soil. These are issues that demand remedying, not sniggering. Daphna Ezrahi, a friend of mine who also attended the protest last night, put it this way: It’s easier to laugh and talk about how crazy LEAVA is than to cry at the fact that it exists.