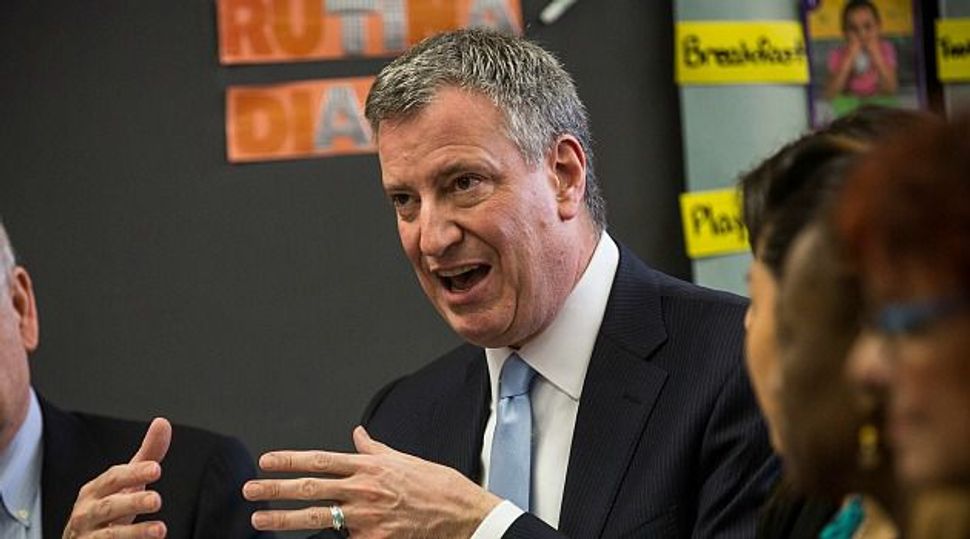 Regulating the ritual practice of a small number of New Yorkers is hardly the top priority of the city’s new mayor, nor should it be, not with the myriad of challenges facing Bill de Blasio, who is slowly remaking city government after 12 years of Michael Bloomberg’s highly successful, though occasionally problematic tenure. But neither is this the time for de Blasio to go wobbly on his principles. And one of those fundamental principles is, as he has stated himself, “protecting children’s lives.”

So if there is a practice common among a minority of New Yorkers that is proven to sometimes cause serious injury or even death to infants, wouldn’t the new mayor want to curtail that practice? Or at least ensure that parents are informed of its consequences? And if a child has been harmed, wouldn’t the mayor want to help his administration investigate who might have caused the injury or death?

The answers to all these questions ought to be yes.

So far, the de Blasio administration has only said no comment.

The practice in question is metzitzah b’peh, in which a mohel performing a brit milah, or ritual circumcision, uses his mouth to suction blood from the open wound he has just made when he removed the foreskin from the penis of an 8-day-old boy. Once it was routinely part of the brit milah — an effective technique for stemming blood flow — but Jews started abandoning the practice about 150 years ago, when safer, more sterile alternatives were sanctioned to clean the wound. Now only some devoutly Orthodox Jews continue to believe that it is absolutely necessary.

It is, however, dangerous. The Centers for Disease Control has concluded that male infants circumcised with confirmed or probable oral sunction are at 3.4 times greater risk for infection than the baby boys whose circumcision was performed more safely. This is because the mouth is a robust home for herpes simplex virus, commonly expressed by cold sores — an easily transmitted, difficult-to-track virus that can cause serious brain injury and even death in vulnerable infants.

The city health department began requiring in 2012 that parents sign a consent form acknowledging the risks, and that mohels keep those forms for up to a year. Ultra-Orthodox leaders have decried the new rules, filed legal challenges, sanctioned a kind of civil disobedience and continue to deny the scientific facts, implying that the city isn’t doing enough to investigate other causes of herpes in these infants.

But how can such investigations take place when parents are told not to cooperate? When the names of mohels are kept secret? When the father of an injured baby would rather implicate his wife than disclose the name of the person who circumcised his son?

Yated Ne’eman, a newspaper in the Haredi enclave of Monsey, N.Y., brought us that last story, via an interview with the father of an infant whose herpes infection led to irreversible brain damage. The father insisted that his wife inadvertently transmitted the virus through her own infected saliva when she was cleaning the baby’s wound.

It’s a convoluted, unlikely story, but one easily investigated. Test the mother, test the mohel and see if either has the herpes virus. But the father refused to identify the mohel. His rabbi also refused.

What religious principle is at stake here? None, it seems to us, that can override the more fundamental Jewish, and civic, imperative to protect children from harm.

The city’s requirement for the consent forms was crafted as a compromise that stopped far short of banning metzitzah b’peh. Widely flouted and unenforced, the regulation is simply not working. City health officials acknowledged last year that an infant was infected with herpes after his brit milah; his parents hadn’t signed the form, nor would they reveal the name of the mohel. Case, apparently, closed.

In a statement to the Forward, a health department spokeswoman said the city is investigating the January case, but she would say no more. As for the new mayor, he is keeping the regulations in place — whatever that means — but he believes that “we can do a better job of coming up with an approach that I think is much more effective at protecting the lives of our children.”

Hard to imagine what the city could do that would be less effective than what’s (not) happening now.

The growth in numbers and political clout of New York’s ultra-Orthodox Jews makes the metzitzah b’peh controversy a potent issue for a new city administration. But we hope that the mayor will see beyond the bald political calculus to be able to firmly place himself on the side of science and public safety.

There are issues at stake here for the larger Jewish community, as well. The move to stigmatize circumcision in some European communities could migrate to America. Ultra-Orthodox leaders say they oppose regulating metzitzah b’peh because they worry that it could herald broader attempts to limit or ban brit milah.

They have it backwards. Championing a circumcision practice that is demonstrably dangerous could taint the entire enterprise. It is politically unwise and, frankly, difficult for the rest of us to justify.

Besides that, and most importantly, it puts very young lives at risk. Shouldn’t that be everyone’s primary concern?