JDate Works for Profit — and the Continuity of the Jewish People 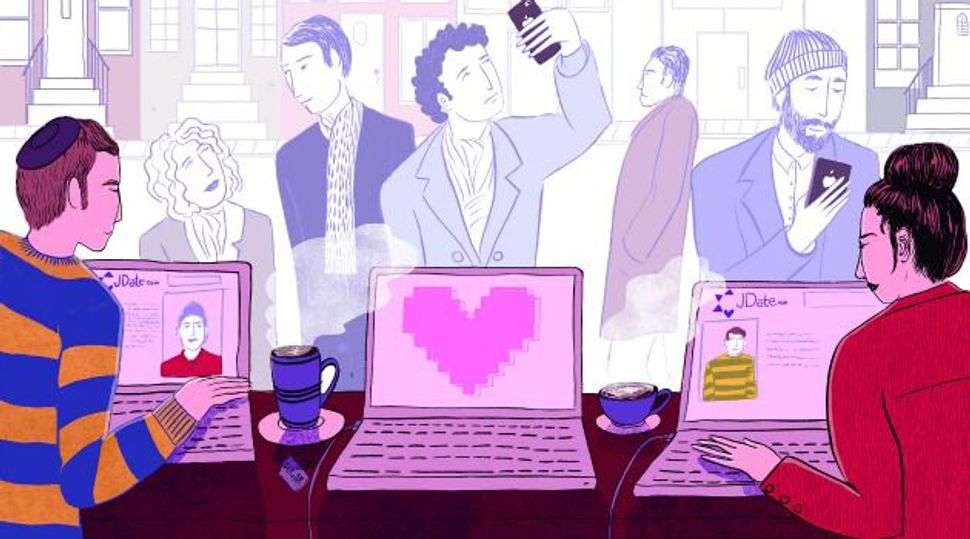 As a businessperson who manages for-profit companies, I spend much of my time evaluating the merits of future projects based on their capacity to generate return on investment.

A year ago I was invited — unrelated to my day job — to give a Jewish TED-style talk analyzing a company with which I have no professional relationship. It is a company that has generated tremendous return on investment, but I have always been more interested in an unintended consequence of that success. That company is JDate, and the unintended consequence included me meeting my future wife.

We all know that hundreds of millions of philanthropic dollars have been thrown at the problem of the Jewish community’s declining numbers. But looking back at the past decade, which endeavor has had the most significant, positive impact on the problem of helping Jews meet other Jews so that they marry and have children? Hillel? Birthright?

JDate continues to have, by far, the best results when it comes to the dilemma of Jewish continuity. And the remarkable thing is that the company made money in the process. JDate boasts 750,000 active users per year around the world. Almost a third of them — a quarter of a million Jewish singles — pay about $30 a month for the premium service.

Consider these numbers relative to Taglit-Birthright Israel, which sends an average of 25,000 participants to Israel annually.

In the United States specifically, there are only about 1.8 million single Jewish adults. An estimated 20% of them are active on JDate in a given year.

JDate and Birthright were founded in 1997 and 1999, respectively. The former’s earnings are surprisingly close to the latter’s expenses over this period. JDate earns over $30 million a year, with a 90% contribution margin.

If you find yourself unconvinced by these numbers, consider surveying the couples you know who’ve married recently. Where did they meet? I often find that JDate is the clear winner by not one, but many orders of magnitude.

JDate began like any other business: Its founders identified an individual consumer need, which they addressed with a targeted consumer product. There were Jewish singles who wanted to find partners of similar background but couldn’t. JDate built a user-friendly product to address this problem. A product so amazing, its audience would pay for it.

In 1997, when JDate was founded, the audience of Jewish singles willing to use the Internet in order to find love was a negligible one. The medium was too new and unfamiliar. For JDate to grow its business, it had to build a global brand. It had to make going online to find a Jewish mate appealing. Through incredible branding and marketing — including everything from billboards in Times Square to tube-stop takeovers in London — JDate established itself as a global cultural phenomenon.

As a result, when you are Jewish and single anywhere in the world, you go on JDate. It is an accepted part of the culture; there is no stigma.

What funded these efforts? Profits from JDate’s customers. The money that JDate earned drove its phenomenal growth. Every subscriber it acquired generated revenue that JDate could re-deploy to market the product further and expand its impact. The focus was on taking initial risks to find and then satisfy their customers, who in-turn grew the business’s profits.

This presents an alternative to the traditional philanthropic model where the customer and revenue source are more often two different entities (participant and donor). The not-for-profit organization focuses a great deal of effort on pleasing the donor, because when the funding is exhausted, the organization’s impact ceases to scale.

To put it another way, would JDate have achieved anything close to its level of reach as a not-for-profit venture? The answer is an unequivocal “no.” A site courting both donors and savvy consumers would satisfy neither — especially in the fiercely competitive online dating ecosystem. No not-for-profit could justify the tens of millions of dollars JDate has spent on marketing — much of it on edgy ad campaigns that few if any mainstream philanthropists would be comfortable with. JDate can, because it makes it back — times seven.

Although JDate serves as a fascinating case study, it should by no means imply that not-for-profit organizations (including the organizations mentioned above) aren’t doing amazing and crucial work in their communities. For the vast majority of society’s big problems, there is simply no for-profit solution.

JDate’s success does, however, prompt the question: What other communal challenges can be solved with similar thinking — focusing more directly on the needs of the participants as opposed to making the donor happy?

In my own career in the (for-profit) video games industry, return on investment is tied to our ability to delight and entertain our customers. Video gamers reward the industry with profits, which are then spent on marketing and on further business expansion.

As an unintended consequence of playing for hundreds or thousands of hours, video game players learn every detail about the game’s characters and the universe that these characters live in. This is why your average 8-year-old can recall 100 Pokemon characters and recite their entire back-story.

There are a number of exciting efforts under way to leverage game design and these unintended consequences of memory retention in order to revolutionize education and teach core subjects in a more engaging way. Many of these efforts employ a for-profit approach to achieve scale in the same way that JDate does. There are untapped opportunities to impact Jewish education positively in a similar way.

JDate might be able to do more for the Jewish community than solve the specific problem of getting Jews to meet and mate — it may also provide the inspiration for approaching many other problems, like how to keep those Jews knowledgeable and engaged.

Sam Z. Glassenberg is the CEO of one of Israel’s leading video game studios, and has created award-winning games and technologies at Microsoft and LucasFilm.

JDate Works for Profit — and the Continuity of the Jewish People