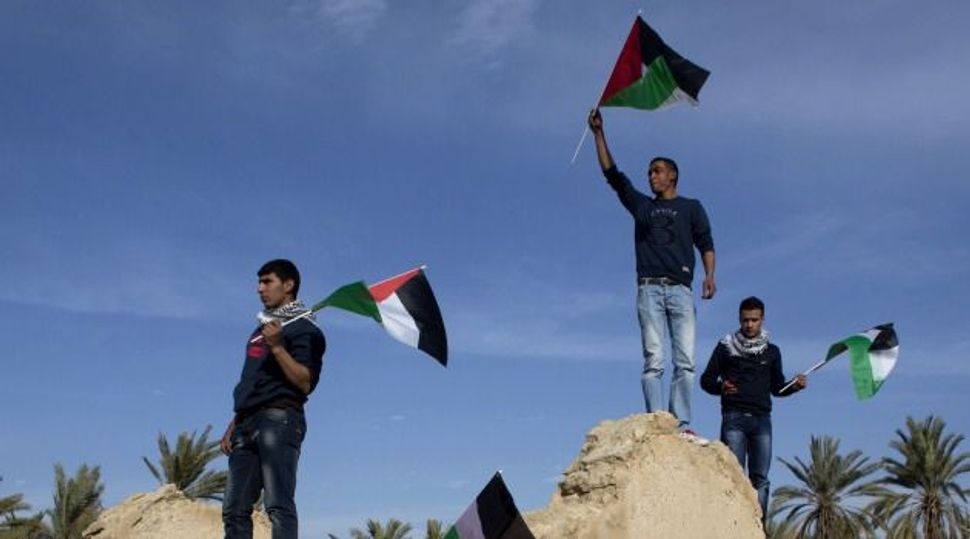 The Jewish and Israeli press is quick to report any and all Palestinian violence against any Jew, anywhere. Which makes sense, of course. Israelis and Palestinians are at war, Jews everywhere have a dog in the fight, violence is deplorable, et cetera and so on.

But, by contrast, there’s a marked reticence to report on events that show Palestinians actively engaged in nonviolent forms of protest, like last week’s little-noted “protest village,” Ein Hijleh, established by hundreds of activists to protest Israeli annexation plans in the Jordan Valley. This reticence speaks volumes. Really inconvenient and uncomfortable volumes.

The Jewish and Israeli narratives — the way we talk about who we are and why we’re here (and though they run parallel, these narratives are not the same) — are, like any other cultural narrative, heavy on self-promotion. Jews share a deep and disturbing history of anti-Jewish violence and hate, and we often tell ourselves that this is the only part of our story that matters when we’re looking out into the world. This is the part that tells us everything we need to know.

In this light, our enemies can only be unjustified in their hate; the use of violence defines them and reveals their truest selves; anything else is aberration and cannot be trusted.

We, on the other hand, are okay. We’re pretty darn good. We use violence, sure, but only ever because we’re forced to. Sometimes we hate, but look at what they did, can you blame us? These things tell you nothing about our souls — and when one of our own strays from our accepted norms of violence (a Baruch Goldstein, say, or a Yigal Amir) he or she is an esev bar, a wild shoot. A bad apple. An aberration.

We do this because before we’re Jews, we’re humans, and humans have done this sort of thing since the moment we noticed that we were surrounded by other humans. It’s entirely human for us to prefer certain facts over others. Human, dishonest and dangerous.

There is no arguing that much of Palestinian resistance to Israeli occupation has been violent — but when we dismiss, disregard, and ignore acts of nonviolence, we are not only denying the full humanity of the enemy we face, we’re telling them that violence is the only thing we understand.

Ein Hijleh may have been the most recently ignored act of organized nonviolent protest, but it was far from the only case. The Oscar-nominated film Five Broken Cameras documents the efforts of the residents of the West Bank village of Bil’in to win back their land when Israel took it to build the Security Barrier; other nonviolent actions against the wall and the occupation are frequently and regularly organized on the West Bank. Indeed, the roots of Palestinian nonviolent protest go way back and could be seen in the popular committees, agricultural cooperation and tax refusals of the First Intifada.

Many might hear this litany and rightfully say that protesting with stones is a violent act, and anyone injured by a stone (or cement block) can tell you: It’s not just violent, but life-threatening. But as a recent report co-sponsored by the ACLU and the Association for Civil Rights in Israel found:

And as Israeli journalist Michael Omer-Man has noted, the right to peaceful assembly is one not granted to the Palestinians under Israeli occupation.

Other forms of life-threatening violence include (but are not limited to): tear gas, tear gas canisters, rubber bullets, not being allowed through a checkpoint, living in the proximity of Israeli settlers and live fire.

Indeed, Israel’s military occupation — really, as Naomi and Gabi Sheffer recently wrote in Haaretz, a military dictatorship — is an act of 24/7 violence. There is no way to force millions of people to accept your rule without violence. Occupation is violent by definition.

So sure, Israelis and Jews have good reasons to hate and fear Palestinians, but we’re lying to ourselves when we refuse to acknowledge that the reverse is true, too. And even so — despite the tear gas, bullets, and absolute lack of a voice in how they’re governed — many Palestinians regularly risk their lives in an effort to achieve a just resolution to a violent conflict with nonviolent means.

Nonviolent Palestinians and violent Jews may not sit comfortably within our narratives. But if we really want to see an end to this conflict, we should value truth more than comfort, and give these stories the coverage and weight they deserve.