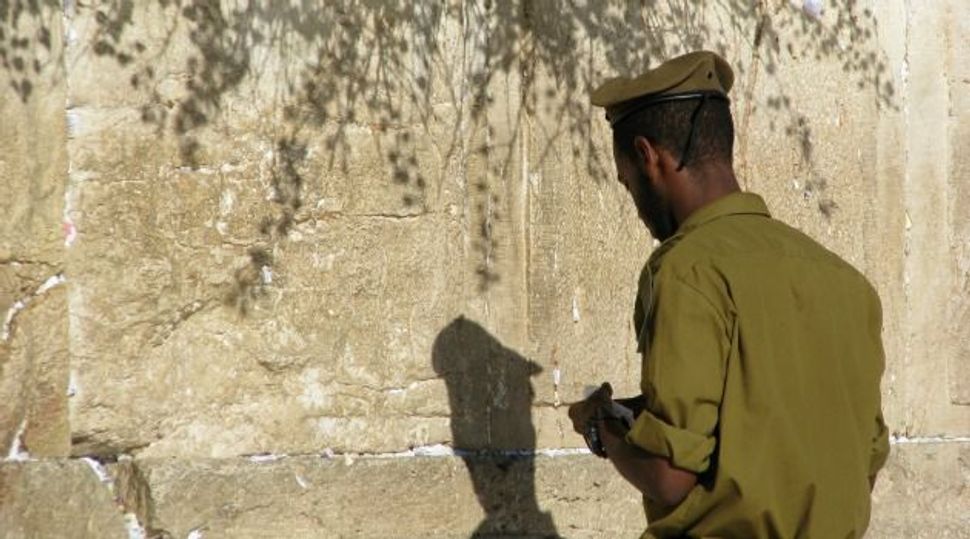 Fitting In: An Ethiopian-Israeli soldier prays at Western Wall in Jerusalem. Image by jane eisner

For the first time last year, Israel’s Knesset held a special session on a shocking issue: the imprisonment of large numbers of soldiers of Ethiopian origin by the army. Pnina Tamano-Shata, one of the country’s two Ethiopian members of the Knesset, reminded her fellow MKs that 40% of all Ethiopian men who have served in the Israel Defense Forces have seen the inside of a military prison. Other Knesset members were unmoved; one felt that the issue must be approached delicately, lest people use it for anti-Israel reasons.

Today the IDF’s prisons are still full of Ethiopian Jews, incarcerated at a rate 760% higher than their proportion in society. Israel’s leaders have proved incapable of addressing this issue. It is time for American Jewry to step into the breech and send a message that when 40% of any Jewish group is imprisoned, it is not acceptable, and drastic action must be taken.

The public became aware of the shocking treatment of Ethiopian-origin soldiers in the past few years, but because the group is one of the poorest and smallest in Israeli society, numbering about 140,000 or 1.5% of the population, it was ignored. In various reports to the Knesset about the integration of Ethiopians in Israeli society, the army claimed to be working on the issue, reducing the incarceration rates of female soldiers from 27% to 10%. However, even among women, Ethiopians are three times more likely than their peers to be imprisoned.

The Israeli army uses prison as a means of punishment for numerous infractions, and soldiers can be easily sentenced to one of the IDF’s two large prisons for short-term stays by their commanding officers. Over the years, the prisoner population ballooned to 14,000 a year. Most of those sentenced are accused of desertion or being absent without leave. Because Israel’s is a citizen army of draftees, many soldiers visit home often on leave. Sometimes they cannot return to base on time, or have family emergencies to which they must attend. Because soldiers are paid only $100 a month, many seek to work during their years of mandatory service. These family and financial constraints weigh on them, and the army justice system is quick to dispatch them to the brig for what amount to offenses related to their socioeconomic background.

When I began investigating this issue last year, numerous soldiers revealed stories of capricious commanders who refused their requests to visit sick relatives, and family obligations that made them choose between exemplary service and sending home money. Ethiopian soldiers, occupying the poorest parts of Israeli society, face immense hurdles. But the army has shoe-horned them into its massive welfare system, where they find a byzantine network of forms for receiving the most basic of financial and social services. Assigned to the worst units, failing on army placement exams, many Ethiopian soldiers express disappointment with their service and see prison as a way out, hoping that through prison they might be discharged prematurely. Even though Ethiopians are motivated and conscripted at the highest levels — fully 90% of men go, compared with 75% of Israeli men overall — almost half of them are spending part of their service in prison. Many are incarcerated more than once.

The Israeli public meets stories of 40% of their brethren being imprisoned with a collective shrug of the shoulders. While they might protest the price of cottage cheese, Ethiopian Jews are not a social justice priority. The army views the issue as an aptitude problem, creating special programs for Ethiopians rather than investigating its officers for discriminating against this group, or placing higher numbers in better units where incarceration rates are lower. Yet most Ethiopians in the army were born in Israel; those who arrived in the 1980s and ’90s rarely served time in prison. This means it is not a cultural problem of integration, it is an Israeli problem that may be tinged with racism.

American Jews have played a key role in fighting for the rights of Jews abroad, such as Soviet Jewry, as well as in advocating and aiding the immigration of Ethiopian Jews. Yet leaders remain afraid of advocating on an “internal” Israeli issue. An entire generation of Ethiopian Jews is being raised with half its men serving time in military prisons. This is a social disaster and a blight on Israel’s record of integrating different immigrant groups over the decades. American Jews can play a role advocating on behalf of those whose voices are not being heard, and demanding that Israel take immediate action to reduce these numbers. American Jewish delegations can make this a priority, and even request to visit the IDF prisons or provide needed outside perspective and expertise. We fought for the prisoners of Zion. Let’s not forget about the prisoners in Zion.