Lesson of the Talmud in an Iraq School Suicide Bombing 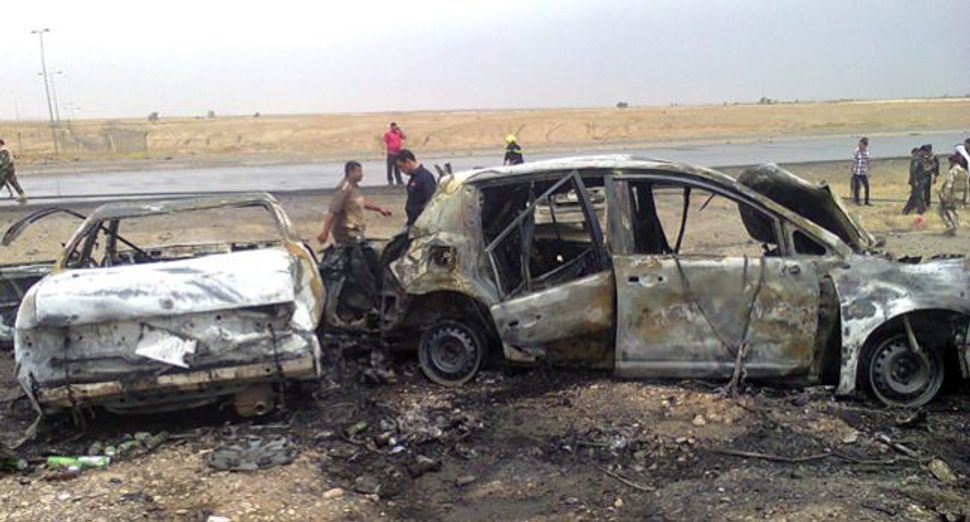 Hell on Earth: Iraqis inspect the site of a blast in Samarra on May 20, 2013. Image by Getty Images

School massacres have become so commonplace that they scarcely shock us anymore. And yet, occasionally mayhem invades the sanctity of the classroom in a way that can still puncture our complacency. At these moments we’re reminded how fragile is this thing we call civilization.

Such was the case February 10 in a rural schoolroom outside Samarra in north-central Iraq, where a terrorism instructor teaching a class in suicide bombing accidentally detonated a live explosive belt. Twenty-one students died along with their teacher.

It happened in a training camp run by the Islamic State of Iraq and Syria, the Sunni terrorist group that was recently expelled from Al Qaeda for, of all things, its excessively brutal extremism in the Syrian civil war. ISIS also bears major responsibility for the renewed carnage in Iraq, which took some 1,100 lives in January alone.

The location of the suicide school in Samarra has layers of poetic resonance, probably unintended by ISIS. Though predominantly Sunni, the city is revered by Shi’ites as the place where the last caliphs are buried and the Mahdi disappeared. Its name resonates in medieval Islamic lore with mysteries of suicide and predestined death, echoed in modern Anglo-American literature and linked to Talmudic legend. But we get ahead of ourselves.

ISIS, sponsor of the suicide academy, is also the terrorist group that recently took over the two main cities in Iraq’s Sunni-dominated Anbar province: Ramadi, the provincial capital, and Fallujah, 30 miles west of Baghdad. Government troops have since retaken parts of Ramadi, but Fallujah remains firmly ISIS-controlled.

There’s a bitter irony in Fallujah falling to terrorists. It was there, in April 2004, that the first major fighting erupted following President Bush’s May 2003 “Mission Accomplished” announcement. The battle for Fallujah marked the effective beginning of the Iraqi insurgency. It was the American public’s first clear indication that invading Iraq wouldn’t be the “cakewalk” the Bush administration had promised. Now we’re back where it all started.

The ironies don’t end there. The Marines were fighting in Fallujah in 2004 to retake the city from insurgent forces led by a Jordanian-born Palestinian Salafi terrorist, Abu Musab al-Zarqawi. As first reported by the Forward in March 2004, Zarqawi’s group, Jama’at al-Tawhid wal-Jihad, was responsible for a string of anti-Jewish terrorist bombings in 2003 in Morocco and Turkey and several attempted anti-Jewish bombings in Germany in 2002. He moved into Iraq in 2003, following the Americans.

Zarqawi’s forces began infiltrating Fallujah in February 2004. In March they mounted a series of attacks that prompted U.S. occupation forces to withdraw. On March 31 they murdered four American Blackwater civilian contractors and hung their charred bodies from a bridge. Americans were outraged. In April the Marines retook Fallujah in a brutal, month-long campaign.

The Marines handed the city in May to a U.S.-armed Iraqi brigade, whose troops promptly deserted and handed their weapons to Zarqawi. In November the Marines again retook Fallujah. It was the costliest single U.S. engagement of the Iraq War. The two Fallujah battles left 143 Americans dead and about 10 times as many Iraqis.

That fall, Zarqawi’s group pledged allegiance to Osama bin Laden and changed its name to Al Qaeda in Iraq, the first of the independent regional affiliates that are now Al Qaeda’s main operating base. Zarqawi was killed in a U.S. bombing in June 2006, but his group survived. In late 2006 it absorbed several smaller groups and renamed itself the Islamic State of Iraq.

It added “Syria” to its name in 2013 after entering that civil war. Now it’s the Islamic State of Iraq and Syria. It once again rules Fallujah. And, until recently, it operated the Samarra suicide academy.

If the name Samarra sounds familiar, you might be thinking of the 1934 novel by John O’Hara, “Appointment in Samarra.” Featured on several lists of the 20th century’s best novels, the book actually has nothing to do with the Iraqi city. It tells of a Pennsylvania car dealer’s descent toward suicide. O’Hara took his title from a medieval Arabic fable about death, as retold in a 1933 play by W. Somerset Maugham. The Maugham version, narrated by Death, appears as an epigraph opening O’Hara’s novel:

“There was a merchant in Baghdad who sent his servant to market to buy provisions and in a little while the servant came back, white and trembling, and said, Master, just now when I was in the marketplace I was jostled by a woman in the crowd and when I turned I saw it was Death that jostled me. She looked at me and made a threatening gesture; now, lend me your horse, and I will ride away from this city and avoid my fate. I will go to Samarra and there Death will not find me.

“The merchant lent him his horse, and the servant mounted it, and he dug his spurs in its flanks and as fast as the horse could gallop he went. Then the merchant went down to the market-place and he saw me [Death] standing in the crowd and he came to me and said, Why did you make a threatening gesture to my servant when you saw him this morning? That was not a threatening gesture, I said, it was only a start of surprise. I was astonished to see him in Baghdad, for I had an appointment with him tonight in Samarra.”

Scholars link the Samarra fable to an older legend in the Babylonian Talmud (Tractate Sukkah 53a), in which King Solomon meets the Angel of Death and asks why he looks sad. Because, the angel says, I’ve been sent to take away your two Cushite servants. Alarmed, Solomon sends the African guards to the Hittite city of Luz, where legend (Tractate Sotah 46b, commenting on Judges 1:23) says the Angel of Death can’t go.

The next day Solomon finds the Angel of Death looking chipper. Why so happy? Because, the angel replies, you sent them to the very place where I was to meet them.

Thus, the lesson of Samarra. In Arabic lore, we’re drawn helpless to our predestined deaths. In the Talmud, it’s kings who dispatch us with the best intentions to what they assume will be a cakewalk, but it’s we — or, per the Talmud, the king’s black soldiers — who do the dying.

Lesson of the Talmud in an Iraq School Suicide Bombing